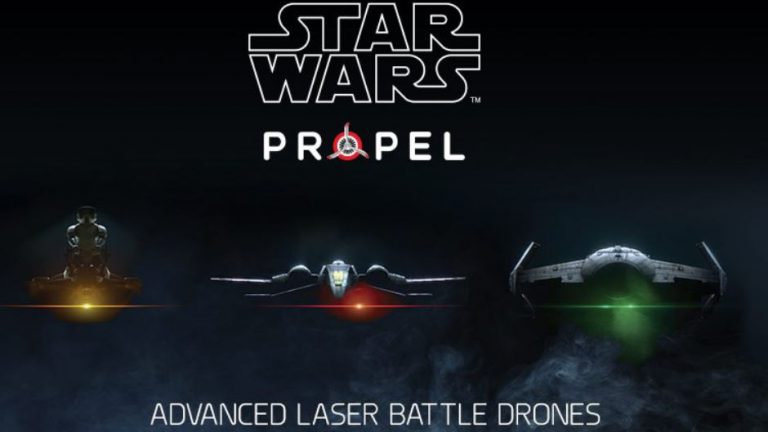 A new generation of multi-player gaming drones has been launch in Australia with Propel’s Disney Star Wars laser drones.

The drones are the first consumer product globally to utilise Li-Fi capabilities, the next generation data transfer technology. Li-Fi is 100 times faster than Wi-Fi, allowing for Light-Speed information transmission. The result is in an instantaneous battling experience with up to 12 drones in the air at one time!

Intelligent Awareness Technology is an all-new technology that provides a real-time interactive gaming experience like no other. This includes Star Wars characters (think Darth Vader) speaking directly to you from the controller, coaching you on how to shoot down your enemy.

Propel propulsion technology places the propellers placed on the bottom of the drone rather than the top. This means the fighter looks like a fighter, not a drone as we know it. The propellers are also clear and are virtually invisible when in flight. They also have a top speed approaching 45 kph!

There are 34 specifically-designed training missions to prepare you for your battles. The iOS or Android App also tracks every battle you compete in, saving all battle stats to your unique gamer profile. Coming soon is a new virtual battling function, which enables you to find other players online and battle against them from around the world.

The Propel drone also has a T-mode (training mode). The speed of the drone is reduced by 30% and it will not fly higher than three metres off the ground and when shot down gently lands. Not that it would be an issue if the drone did crash A unique polymer makes the drone virtually indestructible. And if you do manage to damage any part in the first 12 months, Propel will replace it for free.

The drones are available in two editions. A Collector’s Edition which features a unique serial number ($299AUD/ $329 NZ) and a Standard Edition ($199AUD/ $219 NZ), stocked at all good retailers across Australia and New Zealand.