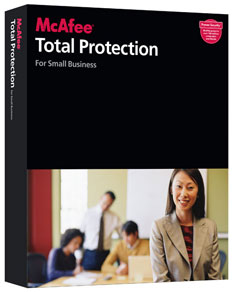 If you work in a small business, you probably know the drill. If your IT manager is enlightened enough to have installed security software at all, then they’ve probably just installed a bunch of consumer security suites, one for each PC. These suites can only be managed from the PCs they’re installed on, and they’re often inclined to ask their users questions that they really don’t know the answer to. Your typical office worker is not going to know the answer when their firewall pops up asking “Would you like to allow csrss.exe to access the internet?” Cue the call to the IT manager (who is probably off-site) – or at least the most savvy computer person in the office.

Recognising that’s the way things worked, McAfee has come up with a very clever managed service solution for small business. It’s not a managed service in the sense that McAfee manages your security for you – it’s managed in that it’s designed to allow a remote IT manager to control the security software on your PCs without having to visit the office. Security alerts that would otherwise generate a popup on the PC are routed to the administrator console.

The way it works is this: a light software agent with a minimalist interface is installed on each PC. While there’s a few things you can do locally – switch the firewall on and off, or run a scan – for the most part the security software is managed through a web interface. You don’t have to be on the protected PC to access that web interface – you, or your IT manager, can be anywhere. The web interface gives the IT manager all the powers of a local “Security Centre” – he or she can trigger antivirus scans, set firewall policies, respond to security alerts and check for security breaches and the like without ever visiting the PC. The single web interface manages all the PCs on the license, so if you have a 25-PC license, they’re managed collectively.

For small businesses without an on-site IT manager, this system is going to have a lot of appeal. It means that staff aren’t going to be harassed by popups, and that the IT manager doesn’t have to make house calls very often. The manager can even install the software by simply sending the client a web link.

The clear highlight of McAfee Total Protection for Small Business is the management interface. It’s dead easy to use, informative and fast. Information from clients is updated in real time and there’s a lot you can manage without having to make a physical visit to the PC. You can also set up groups of users with separate security policies, scan schedules and update schedules. You can check whether client PCs are up-to-date on their virus databases, and can force an update if they’re not. You can check their history or alerts, approve firewall rules and pretty much do everything you could do as if you were sitting in front of the PCs. Group reports are logically arranged and multiple PC management is simple with the McAfee system.

The PC agent is appealingly light as well. Rather than being the massive resource hugger that so many desktop suites are, it doesn’t require a lot of memory and will generally sit quietly in the corner. The user will probably not even notice it’s there.

But it’s not all roses and cupcakes for the Total Protection for Small Business. For a start, the program doesn’t have all the features of most regular desktop security suites. It does the basics – antivirus, antispyware, firewall, email filtering and web protection (which warns against malicious and phishing websites) – but it doesn’t have some of the more advanced features found in full desktop suites. It doesn’t do porn filtering or site blocking (which would be useful if you wanted to stop staff from wasting time on FaceBook). There’s no backup and restore system. No network management or wireless security. Some of these things are superfluous for a business environment, but some are not. It can also be a little challenging to get to work in ‘non-standard’ environments. The web protection filter, SiteAdvisor, only works in Internet Explorer, for example – so if you decide to use Mozilla FireFox for security or personal reasons, you won’t be covered. The email scanner works best with Outlook, though if you purchase the Advanced version of the suite you get server-side email filtering that will work equally well with any email client (of course, you have to run your own email server for this to be useful). The Advanced version’s mail server integration also extends to antivirus filtering, so most mail-borne viruses will never reach users’ in-trays.

In spite of its relatively minor flaws, McAfee Total Protection for Small Business is a very nifty solution, especially for businesses that contract an off-site IT manager. It covers the most important aspects of security, it has an excellent remote management interface and is so quiet that workers will hardly even notice it’s there.

It also has the advantage of being considerably cheaper than the full desktop solutions. It uses a license model, with one license required for each PC that has the agent installed. You can get a three-year license for one PC for just over $60 ? which is far cheaper than you?d find for a traditional desktop security suite, and with very little sacrifice in terms of security capabilities. 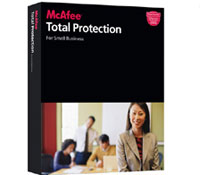 Many small businesses don?t have the technical expertise inhouse to implement and monitor rock-solid security, so McAfee has come up with a way to implement security as a managed service.

Called McAfee Total Protection for Small Business, this solution implements all-in-one suite-level security on all licensed PCs in an office, without the need for an onsite systems administrator or any technical staff at all.

Easy on the network

Unlike the kinds of security suites you might be used to, McAfee Total Protection for Small Business uses a light and unobtrusive client on desktops. Staff will almost never get popups or security warnings, since all security alerts will be routed to the offsite or onsite IT manager to deal with as they see fit. The IT manager can then resolve that problem without the user ever knowing there was one.

In spite of the light client, Total Protection for Small Business provides each desktop in an office full protection against remote and internal threats. It includes a state-of-the-art firewall, award-winning anti-virus and anti-spyware (including a continual system monitoring agent), email anti-spam and anti-virus filters as well as browser protection that detects and blocks visits to dangerous web pages. The Advanced version of Total Protection for Small Business adds email server tools, which are very useful if you run your own email server. Its server-side tools include spam protection and virus detection, ensuring that these threats never even reach staff desktops.

The entire solution is designed to be remotely manageable. Rather than installing a full suite on each PC, Total Protection for Small Business installs an antivirus, anti-spyware and firewall agent on each network PC. Installing the agent is as easy as clicking on a link in a web browser on each PC you want the protection to apply to. There?s no need to carry discs around, and it?s easy for a remote systems administrator to send web links to staff that will
allow them to install the required agent on their PC.

Because it works as a managed service, you or your designated tech manager (who may be offsite), can manage the security systems by visiting the Total Protection SecurityCenter, a web page with tools to monitor and modify the security status of all the secured PCs. It can provide stats on current problems, detail who?s anti-virus and anti-spyware is up to date (and force updates if necessary), manage individual firewall settings, get a complete log of security events (such as attempted attacks on PCs), create groups and group policies, and set scanning schedules and policies. The management console is designed from the ground up to be easy to use, so expensive calls to your tech support manager can be minimised.