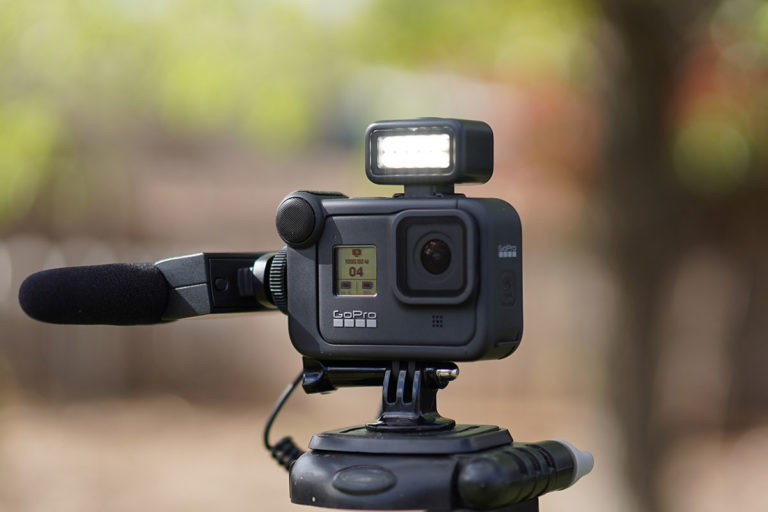 Want to get more out of your GoPro Hero8 Black? Maybe boost its cinema performance? The Media Mod for the GoPro HERO8 Black could be just the thing. Here’s a quick look at it, and also the GoPro Light Mod. (There’s also a GoPro Display Mod, but I didn’t get my hands on that.)

About the Media Mod

The only physical connection the GoPro HERO8 Black has is a USB Type-C port. This is under a little door on the side of the camera, which also protects the battery bay and Micro-SD card slot. The Media Mod is kind of a cage. You remove the side door of the camera and then slide the body into the cage. A USB-C plug inside the cage slips into the USB-C socket. You close the fourth side of the cage and the Media Mod is right to go. It’s powered by the camera.

The bottom of the Media Mod has a cut-out which allows the HERO8 Black’s mounting tabs to be pulled out for standard mounting. An indent on the bottom edge makes room for the screw knob to be tightened, although I found it a tight fit.

So what does it give you that the standard HERO8 Black doesn’t? More connections, a potentially better microphone, and accessory shoes.

The Media Mod has a USB Type-C socket – so you can still connect your camera to your computer without having to take it out of the Media Mod. Note, when I upgraded the HERO8 Black to the most recent firmware, the USB connection type defaulted to the new GoPro Connect standard, which is for video streaming. For downloading your videos to your computer, you need to go into the settings and change the USB connection back to MTP.

It also has a 3.5mm microphone input and a Micro-HDMI output. The latter allows you to use your HERO8 with an external monitor, or just to play back your recordings and photos on a larger screen. When used this way, the camera’s own display switches off, but you can still swipe on it and use the record and mode buttons to control the camera, picking what you want from the display on the TV. The control system was a bit unwieldy, unsurprisingly give the few controls available. I imagine you’d be able to work it better once you got used to it.

In the top corner of the Media Mod is a relatively substantial forwards-facing microphone. GoPro says it is directional. Remember, the standard HERO8 Black has three built-in mikes in various places on its body. When the Media Mod is in use, they are switched on and the Mod’s microphone takes over.

It is fairly sensitive, noticeably more so than the built-in microphones. That gives it further reach. I found it increased the clarity of my voice when I was recording outdoors, speaking at a range of about two metres. There was some wind noise but it was reasonably well controlled. There was clearly some auto-level circuitry, since when the wind did hit, the whole sound level dropped a little. While the built-in microphones were pretty much omnidirectional, with the audio equally clear, whether I was in front, behind, or to the side of the microphone, the Media Mod’s microphone was noticeably directional. Roughly, though. The recording was still strong up to about 90 degrees from directly ahead, but beyond that the level fell away sharply and my voice became quite muffled.

I used the Sennheiser MKE 400 compact shotgun mike as a comparison, plugging it into the Media Mod’s microphone input. My, what a difference it made. My voice was far more natural and realistic, although wind noise was considerably worse. The Sennheiser microphone also had a much tighter pickup pattern.

An accessory shoe is simply what we used to call a flash shoe. It’s where you can slide a camera flash. They’re “cold”, of course (that is, with no electrical contacts). You can use it to attach things like a camera microphone or the Light Mod. There’s one on top and one on the side.

The Light Mod is a tiny little thing, just 4cm by 2.3cm by 2.3cm. It has ten LEDs and a rechargeable battery built in. A white diffuser cap slips over the LEDs. A USB Type-C connection is used for charging. A single button on top operates it. Hold it for a few seconds and it switches on at its lowest level (20 lumens). Presses cycle through the modes: brighter (60 lumens), brightest (125 lumens), flashing, back to least bright and so on. Very easy. GoPro rates it at six hours of life in the least bright mode, one hour in the brightest mode. There’s also an “Overdrive” mode, invoked with a double-tap on the button. This produces 200 lumens.

I found the full brightness mode very useful. I frequently slipped it onto a very expensive full-frame digital still camera for taking product shots. It was just plain useful to have around.

So while it’s part of the GoPro Mod family, you can use the Light Mod with plenty of other photographic equipment.

If you are just actioning around with your GoPro, then I doubt that you’ll find much use. But if you want to up your professionalism, and perhaps use your HERO8 Black for things like event recording and interviews, you’ll find the Media Mod a very useful enhancement. And the Light Mod is useful, even if you don’t have a GoPro camera at all.

Features
Value for money
Performance
Ease of use
Design
Opens up a GoPro HERO8 for use with all kinds of accessories
Light Mod is bright and effective
4.7

GoPro goes live with Periscope and a phone