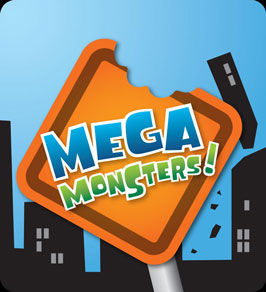 Mega Monsters, the latest N-Gage game from Nokia Games Publishing, introduces players to the biggest monster smash on mobile. The result of a mad scientist combining his supply of adorable animals, a borrowed gene splicer and a surplus government nuclear reactor, each Mega Monster provides an evil blend of cute and killer. With the intuitive one thumb control, players direct the Mega Monster of their choice to do what monsters do best – destroy!

Mega Monsters features rich 3D graphics with fully destructible environments where players can destroy anything in their path. While on the rampage, players must ensure their Mega Monster destroys selected targets and can pick up dozens of special items, including clothing and other items, to add character to their creature. Each Mega Monster develops its abilities, powers and appearance as it progresses through different missions.

Players can stomp and smash through a series of existing city environment or they can create their own map and challenge others to beat it by uploading it to the N-Gage Arena. Players can also customise their game by taking a photo to use on an in-game billboard.

Mega Monsters is being developed in collaboration with Firemint, a leading Australian independent games studio with a particular focus on designing and developing high-end 3D titles for portable media devices. Firemint is an International Mobile Gaming Award winner for Excellence in 3D.