Memorex SingStand – turn your iPod into a Karaoke machine 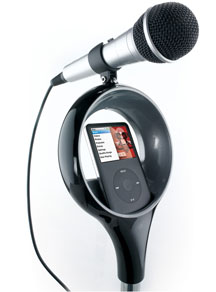 For those who like nothing better than to kick back and belt out a few tunes with their friends, the Memorex SingStand will turn any party into an entertaining event or a crime upon music – it could go either way.

The SingStand is an interactive karaoke system that lets you sing along to music stored on an iPod device or an MP3 player. Taking karaoke to a new level, the Memorex SingStand features a microphone and full-size integrated mic-stand, eliminating the traditional CD+G unit that displays graphics and lyrics.

The system’s ‘Auto Voice Control’ (AVC) feature eliminates the original song vocals allowing you to put your own touches to the song and even change the words if the occasion calls for it – perhaps a serenade for a special anniversary or fun tribute at an 18th or 21st birthday. An echo feature adds the perfect touch to those favourite 80s numbers.

All iPod and MP3 devices with a standard 3.5mm headphone jack can be used with the SingStand, which comes with two four-inch speakers and an integrated swivel microphone. Rock gods and godesses – you can also plug in a guitar.

The SingStand is available now, from retailers including Leading Edge, Harvey Norman, Good Guys, Retravision, WOW sight and sound store, and more, at an RRP of $199.