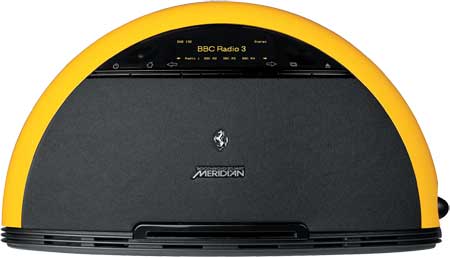 Occasionally we reviewers get an item across our desks which is simply unbelievable. The Meridian F80 is one such.

Here we have a compact radio/CD player/DVD player with its own speakers built-in. It measures less than 410 mm wide, 230 mm tall and 185 mm deep, and is styled in a dramatic arc with strong colours. So it ought to do an okay job and, let’s face it, most of us would be satisfied with that.

But the Meridian F80 leaves ‘okay’ behind in the dust.

Meridian got together with, of all companies, Ferrari for the F80. The famous car maker contributed styling and materials expertise. But let’s face it, Meridian did the really hard stuff. That is, for example, packing 80 watts of power into this small unit, along with three speakers (one a ‘subwoofer’), and some pretty clever processing.
In addition to the AM/FM radio, the disc player handles MP3 and WMA music files, and plays regular CDs and DVDs. The video output from the latter is limited to composite and S-Video, so the ultimate in picture quality isn’t available.

Like many Meridian products, a row of ‘soft’ keys is used for control of the unit. These are underneath the wonderfully clear display panel and give you a lot more control than you would have thought, just by following the logically organised structure of the buttons. Basic DVD control features, such as aspect ratio setting, are included.
There are also some auxiliary inputs, including an optical digital one and a socket for an iPod adaptor cable.

Aside from the power output, Meridian doesn’t have much to say about specifications. I imagine it’s because no one would believe them anyway. But I started with a wide-ranging, dynamically challenging, jazz CD and was amazed. In fact, after 60 seconds or so, I backed the track up to the start and paused it, and rushed off to get someone else to have a listen. She, also, was amazed. What we heard from this tiny unit was room-filling musical sound in which the cymbals reached the heavens, and the bass descended nearly all the way to hell.

I’ve heard many floorstanding stereo loudspeakers that couldn’t deliver bass as well as this system. I switched over to some rock music with a male vocalist, and his voice was a little too full in the bass, so I explored the setup menus. Turns out there’s one for setting the position of the unit (eg. wall, freestanding). Set correctly this immediately tamed this. There’s also a ‘width’ control, which applies a digital signal processing to widen the stereo image (always a problem with compact units). This did its job nicely, with a broadening of the music beyond the bounds of the unit itself. The DVD player did its job as well, although there’s no surround sound.