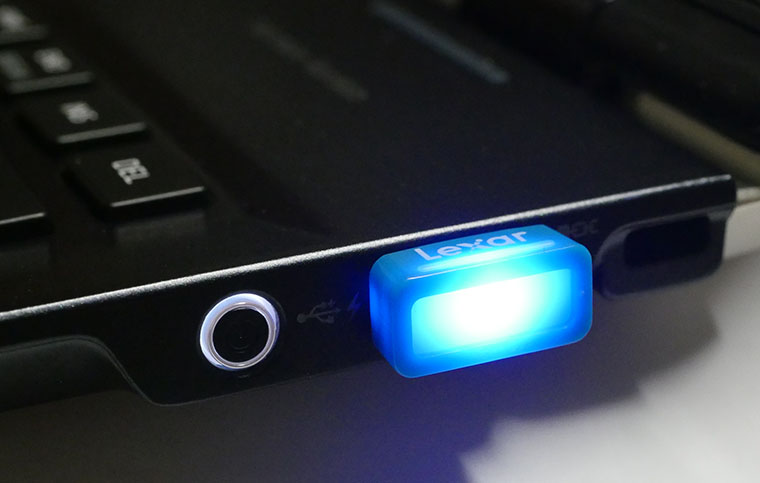 Since I’ve reviewed the super speedy, and rather expensive, Lexar P20 128GB JumpDrive, and in the process had a whinge about how limited in speed many so-called USB 3.0 thumb drives are, I figured I ought to have a quick look about something more affordable. So here I present the $39.95 Lexar S45 GBGB USB 3.0 JumpDrive.

About the speed the packaging says only that it supports read speeds of up to 150MB/s and that “write speeds are lower”.

Included on the drive is EncryptStick Lite software which you can use to secure the drive’s contents should you wish. As delivered, the drive is FAT32 formatted, which means it’ll work with just about any computer or other device which supports USB, including Macs. Windows reports its capacity as 59.6GB because through some historical quirk, while Windows uses the power-of-two factor for things like kilobytes and gigabytes, disk storage uses standard decimal notation. So in disk talk, 64GB is 64 billion bytes. Which is indeed the capacity of this drive. More precisely: 64,002,949,120 bytes.

So, for a couple of quick speed checks. Since it had FAT32 formatting, there’s a 4GB per file limitation (you can reformat to exFAT if you need bigger files, at the cost of reduced compatibility). I used a single 2,747,412,480 byte (2.55GB) video file.

I used new MacBook Pro and Toshiba Portege, both with fast SSDs, for the test. They produced similar results. To write it was pretty fast, although not a patch on the Lexar P20. It took 65.8 seconds, according to my stop watch, to copy the file from the Mac to the S45, and 67.5 seconds for the Toshiba. That works out to 39.8MB/s for the Mac and 38.8MB/s for the Toshiba.

Here’s the Windows 10 copy dialogue as the copy is nearing its end:

Reading was much faster. It took 21.2 seconds to copy from the Lexar S45 to the Mac, and 21.6 to the Toshiba. That’s 124MB/s for the MacBook Pro and 121MB/s for the Toshiba Portege. Again, here’s the relevant Windows 10 copy dialogue:

As a practical matter it can be a bit hard to use because it has a fairly tight grip on the USB socket into which it’s inserted, and there’s not very much body to grab. So it’s easy to insert, hard to extract. I was tempted on a couple of occasions to reach for some pliers.

The exposed part briefly lights up blue when first inserted into a USB socket, and flashes during data access, whether reading or writing. A cap covers the plug part to protect it when not in use.