Microsoft announces more Surface, plus lots of other stuff 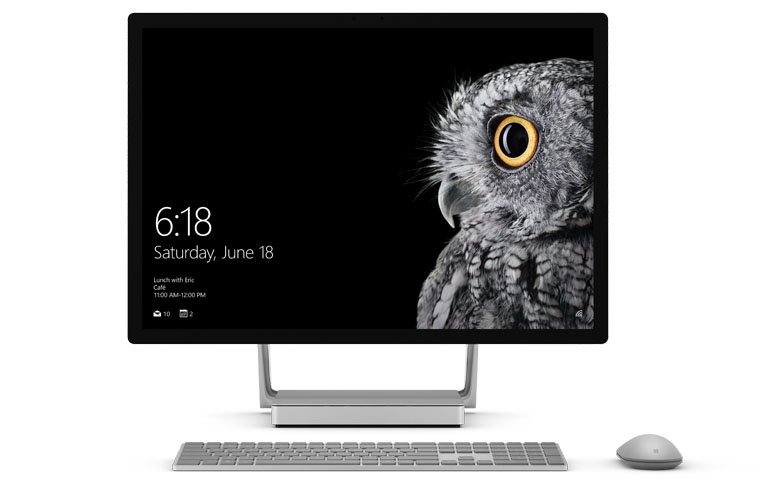 Not to be outdone by Apple’s new MacBook Pros, Microsoft last week announced its aims for the next Windows 10 update, associated software, the gradually converging Xbox and an unexpected big new piece of hardware, the Surface Studio, along with enhancements to the Surface Book.

Let’s start with the Surface Studio. At first glance this looks like an iMac, or some variation of a big-screen all-in-one. It kind of is, in a super premium sense, with a twist. The 28 inch “PixelSense” display is like a Surface Pro writ large. Very large. It has the Surface Pro standard 3:2 aspect ratio and apart from larger size it offers more pixels. Many more. The resolution is 4500 pixels across by 3000 down, or greater than 4K.

As the name implies, Microsoft is targeting creative professionals with the Surface Studio. The trick: using what Microsoft calls a “Zero Gravity Hinge”, it folds down to a near horizontal angle as though it were a drawing board. Then artists can unleash their talents using the (included) Surface Pen with its 1024 levels of pressure sensitivity.

The entry level model ($US2999 – no Australian pricing or release date yet) has an i5 and 8GB RAM, but models up to i7/32GB ($US4199) will be available. They come with NVIDIA GeForce graphics cards rather than relying on the Intel processors’ display capabilities.

Since it’s designed to sit on a desk rather than being carted around (it weighs just shy of ten kilograms), the up to 802.11ac WiFi is supplemented by a Gigabit Ethernet port. There are also four USB 3.0 ports, Mini DisplayPort, audio jack and a full size SDXC card reader (which will save a lot of mucking around for photographers). I’d say it’s a pity that Microsoft hasn’t taken the USB Type-C plunge yet. The lack of USB Type-C might prematurely age it.

It comes with the new Bluetooth connected “Surface” keyboard and “Surface” mouse. From the pictures, the keyboard looks quite a lot like the venerable Apple wireless keyboard, except wider to accommodate a numeric keypad. These have been announced separately for Australia from mid-November: $159.95 for the keyboard and $79.95 for the mouse.

One nifty option is the “Surface Dial”, a metallic puck that sits on a Surface’s display (it also works with a regular Surface Pro and Surface Book). This clever thing can bring up a circular menu or operate to zoom or scroll by rotating it. It works in conjunction with Surface Pen, letting you adjust things about the pen stroke even as a line is being drawn. It looks like it won’t be coming here until the Surface Studio does. US pricing is $US99.

Some details on the next major Windows 10 update were released. In keeping with the Surface Studio, it’s being called “Windows 10 Creators Update” and it should be out in the first couple of months of next year.

The emphasis of this seems to be 3D. In particular, a new app called Paint 3D Preview will allow the drawing of 3D objects. Microsoft’s video materials show people walking around objects, using their phones to grab a 3D rendition of objects which can be edited in Windows. But it says 2D objects can also be rendered into 3D. Along with easy sharing features, and hints of a Groove music editor/creator (Groove is Windows 10’s music player), Microsoft also promises improved support for 4K gaming.

Still on 3D, Microsoft has launched a website called remix3d.com for uploading 3D creations and sharing them with a 3D community it looks like Microsoft is trying to grow. You can get in now yourself if you’re running a Windows 10 computer. But only if you sign up to the Windows Insider program. For that, you’ll have to be prepared to have Windows update with newer test versions on a regular basis. That can be a lot of fun if you have sufficient data allowance (each update will likely be several gigabytes) and a Windows 10 computer which isn’t critical to your work. You know, just in case it doesn’t work. These are test versions, after all.

The Creators Update is also including better support in Microsoft Office apps for inking with a pen, including adding an “Ink Editor” to Word. That means you can use a smart pen to actually make edits – cutting out stuff, highlighting and so on. And of course, Office is being updated to work with the Surface Dial. (Yep, you can try those out now if you want to sign up for the Office Insider program).

The Creators Update will also support virtual reality headsets from a number of manufacturers. These are “mixed reality” headsets, like Microsoft’s own Hololens, which overlays normal vision with 3D created objects.

There’s also going to be a facility to record and broadcast game play.

Finally, there’ll be a new feature called “MyPeople”. This lets you put chosen people on your task bar so you can readily chat with then, and share things with them just by dragging objects – documents, photos and videos – to their icons.

I kind of wonder why they haven’t thought of that before.