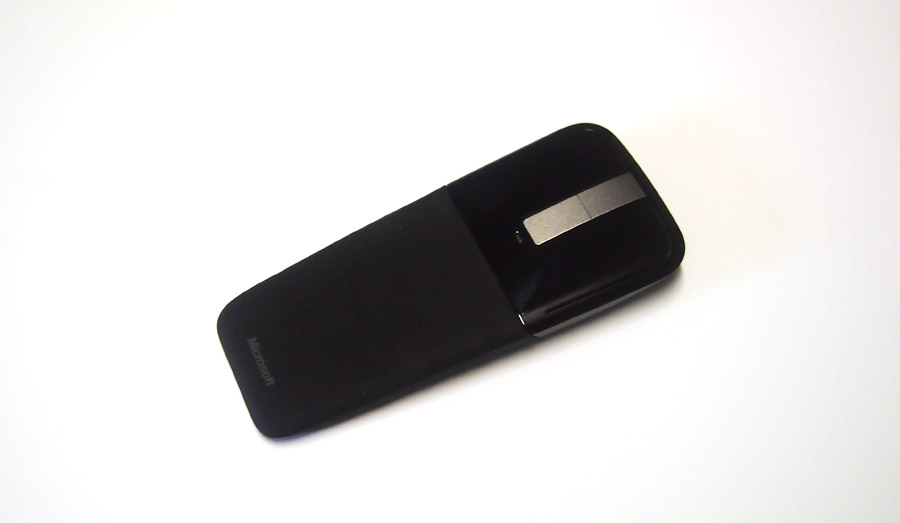 Microsoft’s Arc Touch follows on from the original Arc, a compact pocketable mouse that appeared in 2009. Two years on, Microsoft has updated the optics and added touch sensitivity.

Designed to accompany portable notebooks, the Microsoft Arc Touch is a wireless mouse that can be stored flat when not in use.

Made in two parts, the operation buttons sit on the front half of the mouse – a plastic compartment that hosts/holds a left-click, right-click and middle-mounted scroll wheel that sits completely flush.

Underneath this section is a cavity for storing the two AAA batteries that power the Bluetrack laser sensor, a technology that allows the mouse to operate on pretty much any surface, provided it’s not transparent or mirrored.

The back half of the mouse is a little different. Here, the mouse turns into a segmented strip of flat plastic covered in rubber. Bending this part of the mouse into an arc creates an ergonomic shape designed to fit into your hand, and also switches the mouse on.

On the rear of this back section is a hidden magnet (denoted by a small USB etched drawing), useful for storing the tiny accompanying USB wireless receiver.

Out of the box, it’s hard not to admire the work Microsoft has done with the Arc Touch. While its predecessor simply folded up for portability, the Arc Touch lies completely flat, folding into the curvature of your hand only when you want to use it.

As long as your tiny USB receiver is plugged into a computer, the Arc is ready for action the moment you bend its back.

Without tweaking the settings, we found the mouse to be responsive, allowing us to continue using our computer without have to make any of the readjustments new peripherals often require.

We tested the Arc Touch on Mac OS X 10.6 and Windows 7 and found no need for the installation of specific drivers  – the mouse seems to function with whatever the operating system deems native. If you want to add some customisation to the buttons, Microsoft provides an Intellipoint driver for download on its website.

If your hands are a little smaller than the average, the grip you have on the Arc Touch might not be as close as the buttons require. Annoyingly, the left and right buttons stop being clickable about 2 centimetres from the start of the mouse button, making it a requirement that your fingers touch the tips of where the buttons start. Smaller hands might have problems here, as the contour of the back seems to dictate where the fingers will land.

The flat scroll wheel is an interesting feature, replacing as it does the conventional physical wheel with a thin touch-sensitive panel that provides a little bit of haptic feedback.

Using this to scroll through documents and webpages makes for a good experience, although the extra gesture control features aren’t so successful.

Similar to how Apple’s Magic Mouse works, you can touch the top and bottom sections of the Arc Touch’s scroll wheel to perform a page-up or page-down. You can also double tap the touch scroll wheel in the middle to activate a middle click – a function that’s was used to drag through a webpage quickly and is used little these days.

We found these controls worked unreliably – sometimes good, but most times, not. The page-up and page-down feature was particularly hit-and-miss.

The Arc Touch is cleverly and appealingly designed, and with the ability to pack flat, allows your notebook bag to present bump-free silhouette at airport lounges wherever you go. The touch scroll wheel is a nice feature too, and although not quite as well executed as we’d expect from a premium peripheral, provides more control than the touchpads on most notebooks.