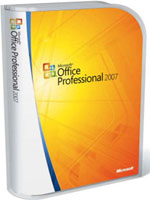 Get the job done better, faster – at home or in school.

Whether you’re on the home computer creating digital scrapbooks or a student lugging a notebook around campus, Microsoft Office Home and Student 2007 helps you get the job done quickly and easily. New features add power to your word processing, spreadsheet, and presentation capabilities. Optical character recognition in Microsoft Office OneNote 2007 allows you to search handwritten notes, text in pictures, or spoken words in audio and video recordings.

One of the most significant changes with Office 2007 is the new user interface (UI). The UI design team had one mission – to create a user interface that makes it easier to use the technology. With Office 2007, traditional menus and toolbars have been replaced with the new ‘Ribbon’ which makes it easier for people to find the appropriate features they need to get the results they want. The Ribbon is found in five programs: Access, Excel, PowerPoint, Word and certain parts of Outlook. The new results-oriented UI design enables people to complete documents with up to 60% less clicks and 65% less mouse travel than in previous releases.