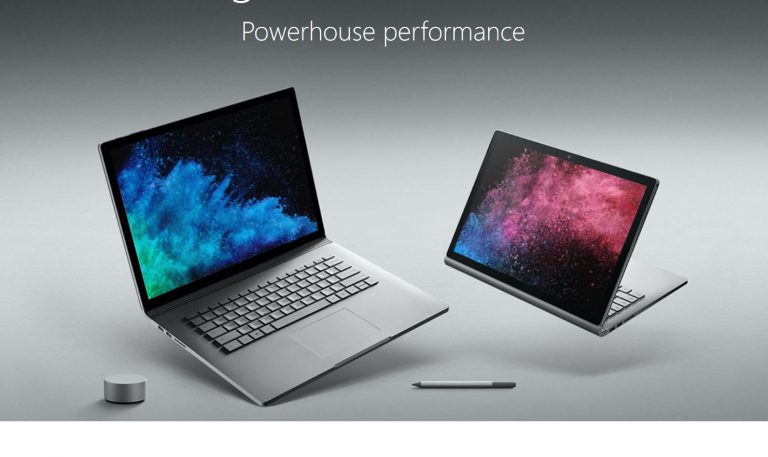 Reviewing the Microsoft Surface Book 2 is like putting on a pair of comfortable old slippers – that aaahhh feeling of familiarity and comfort as you slip into them.

You see, I own a Microsoft Surface Book 1. It has long been my faithful companion and will continue to be so for many years to come. It was so far ahead of the pack when released in October 2015, especially the i7 model with NVIDIA graphics, that it is still very useful today.

I nearly bought the Surface Book 2 late last year as it had at long last included a USB-C port. Alas, only a 3.1, Gen 1 port with power and data, not Thunderbolt 3.

Ultimately, I bought an HP EliteBook x360 1030 G2 with USB-C/Thunderbolt 3 instead as GadgetGuy’s production PC. Damn Microsoft – if only you had Thunderbolt 3!

The differences are subtle between Book 1 and Book 2

I could be cheeky and copy the Microsoft Surface Book 1 review. But times have changed and so has the computing landscape. So, this is a fresh review against GadgetGuy test paradigms.

It is unique – there is no other device where the screen detaches, with an NVIDIA GTX keyboard base, dual batteries and a 3:2 ratio screen.

And because it is unique Microsoft can charge whatever it likes. Frankly, I think it is good value for what you get.

Obviously, those who can afford it! But more than that it is ideally suited to

The nice solid box is rather bereft of goodies. You get the tablet section, the appropriate base and a Surface Ribbon charger.

The first impression is well made; matt called VaporMg magnesium and an interesting designed hinge. It is neither beautiful nor bland. Quietly elegant.

Setup is the typical Microsoft Windows 10. This one can use Cortana to voice guide you. I knew what I was doing, so Cortana only slowed me down.

As with any Windows device, I urge you to turn off all the default ‘privacy’ – or is that anti-privacy settings at setup. It does not affect the operation at all. If you need something like location it is easy to change this under Settings, Privacy.

Microsoft has listened and in all new setups does at least present privacy options – that is way ahead of other operating systems that assume you want to be spied on.

It comes with the typical Windows bloatware – mainly games and trial versions of software. Again I urge you to remove these (right click on the menu icon and select uninstall) if only to free up disk space and memory.

Just to remind you that this is a tablet with a detachable keyboard.

Pressing an electronic release button detaches the screen. You can re-attach it, either way, e.g. like a clamshell notebook or tent style.

The hinge does not allow the screen to fold flat like a typical 360° design.

If this is a need (and I can’t see it as a deal breaker) look to some similar quality commercial grade foldables from HP (Elite Book or Spectre) and Dell (XPS).

The screen sits firmly on its magnetic muscle wire locking mechanism. There is a slight front/back wobble if moved but it’s solid when typing.

One of the best, most accurate colour screens in a very usable 3:2 format. The allows for more usable space than 16:9 screens. It is like an A4 sheet 297x210mm format.

The screen is factory calibrated to 96.6% sRGB (about 65% AdobeRGB) so artists, designers and photographers can use it. Blacks are solid, and whites are white – no cast. Brightness is 462 nits ad contrast of 1800:1 (or more) – excellent.

It is a PixelSense screen. The best way to describe it is more of a work surface than a screen. A special PixelSense processor ensures the best colour, clarity at all angles, and to support Windows Ink (active digitiser) and capacitive touch.

A separate Microsoft Pen controller (was called a G5 chipset) almost eliminates any pen latency or touch lag. It works!

It gives you a virtual ‘home’ that offers various experiences as you move from room to room, letting you view and operate movies, apps, games and holograms. You can also use your voice to invoke the Cortana digital assistant.

This is the best typists keyboard of any notebook.

The key throw is 1.5mm. This is about the minimum you should expect (none of this Apple MacBook 1.00mm rubbish) and around 70g actuation force. Key presses are firm but not tiresome with a good tactile feel.

There is no bounce of neighbouring keys either. Good 100wpm touch-typing speeds are possible. In an initial test I scored 90% of my mechanical keyboard speed, and after using it for about half an hour, it was up to 95%.

It has three levels of backlight. When off the letters are black. You can select three levels of illumination to make the letters white, whiter or whitest on the grey keys. There is a slight light bleed around the keys, unnoticeable when you are typing.

The 109 x 70mm glass touchpad is Microsoft Precision certified – that means it supports four finger swipes as well as 100% cursor movement from top right to bottom left in one swipe. It is accurate and a joy to use.

The 4096-pressure level pen at A$139.95 is an improvement over the previous 1024 incarnation. It adds pen tilt for thicker lines. A lower 9g actuation force makes it as easy to use on glass as a rollerball pen on paper! The Pen comes in Burgundy, Cobalt Blue, Aqua, Black and Platinum barrel colours.

It connects via Bluetooth 4.0. It comes with a replacement pen tip kit. The best thing I can say (as I have no artistic skills) is that it is easier to write and annotate than the previous pen. It closely matches pen on paper experience.

I did not try the A$149.95 Surface Dial that adds dial controls to many drawing tools.

Let’s go back to USB-C

I mentioned the USB-C – it is not Thunderbolt 3 (damn you Microsoft), but it is an expansion port that supports 5Gb/s data and power.

Technically it is a USB-C, 3.1, Gen1, 5Gb/s with USB Power Delivery supporting up to 45W upstream and 15W downstream.

That means it will power most USB devices like external SSD and hard disks.

The Windows Camera app is surprisingly flexible, and you can download third-party apps from Windows Store for things like picture in picture, as a security camera, various filters and effects etc.

It has Dolby Audio 2.0 channel processing but no equaliser or pre-sets. That means it will play Dolby encoded content (movies) with low total harmonic distortion. It is a step up from the included Realtek drivers.

Output to Bluetooth and via a 3.5mm jack had a noise-free signal. Frequency response was from 20Hz-20kHz.

The two forward facing speakers do a good job as a personal music and movie player. Frequency response had bass kicking in at 100Hz and a relatively flat response (good) to around 16kHz. Maximum volume was 74dB – like a vacuum cleaner at close quarters. Watching an action movie hovered around 60-70dB.

Sound signature is Mid (bass recessed, mids boosted, treble recessed). Small speakers simply don’t have the diaphragm movement to punch out bass, so it is best for vocal like Skype. It is not unpleasant when listening to movies – just lacking bass and sometimes a little harsh.

The internal speakers are fit for purpose – but wear headphones or connect to an external speaker like the Sony Extra Bass SRS-XB40 if you want to head thump.

It has two batteries 18Wh in the tablet and 57Wh in the base. These combine to give it 75Wh. Microsoft say 17 hours use is achievable.

PC Mark 8 rates it at 6 hours for the 13.5” and 7.5hours for the 15”. These are realistic figures you can expect with a standard office workload.

A 1080p video loop at 50% brightness with Wi-Fi off achieved just over 11 hours. The same test on the tablet section only achieved three hours.

Recharge time is around 2.5 hours with the 95W charger.

While it will charge from USB-C, the maximum upstream is 45W, so it would need to be turned off and probably take 10 hours to charge fully.

But I want to put these Benchmarks in perspective. The new i9 processors which we will see in a couple of years will have previously unheard-of benchmarks between 20-30,000.

The move to quad-core has given an impressive performance increase over the older dual-core models.

The noise was30-3dB under normal use. But it increasd to 49dB under 100% load with the NVIDIA base working flat out.

Both have an integrated Intel UHD 620 Graphics chip that drives the tablet (when detached) and for run-of-the-mill applications.

This drive is a screamer in sequential read/write where the Bus interface does not impede it. I suspect the 1TB drive is faster than the lower capacity versions.

It uses a Marvel Avastar AC wireless chipset that performs better than most Intel chipsets. It achieved the full 866Mb/s on a 5GHz channel from a D-Link AC3200 triband router at up to 10 metres and then dropped slowly. Amazing.

Windows Hello uses facial recognition to sign in. It is very easy to set up, and you can still have a password and pin. It was brilliantly fast on this device.

You can also enable device encryption, and it has a TPM 2.0 chip for enterprise use.

If you want to look under the hood go to iFixit’s teardown here.

It is hard to improve on perfection. Microsoft’s Book design is unique, and given that others have not copied it will probably remain so.

It is, without doubt, the best all-around Windows laptop/convertible device. It is what users expect from a high-end device.

Having said that there is a lot to like about the Dell 13” XPS and the HP Spectre/Elitebook x360 models.

It is a MacBook Pro replacement. Mac users a hard lot to change so even though it has better higher res screens, touch, pen, more power, better keyboards, lower cost and much more they simply are loyal to the Apple ecosystem.

Well, the 15” version may tip the scales!