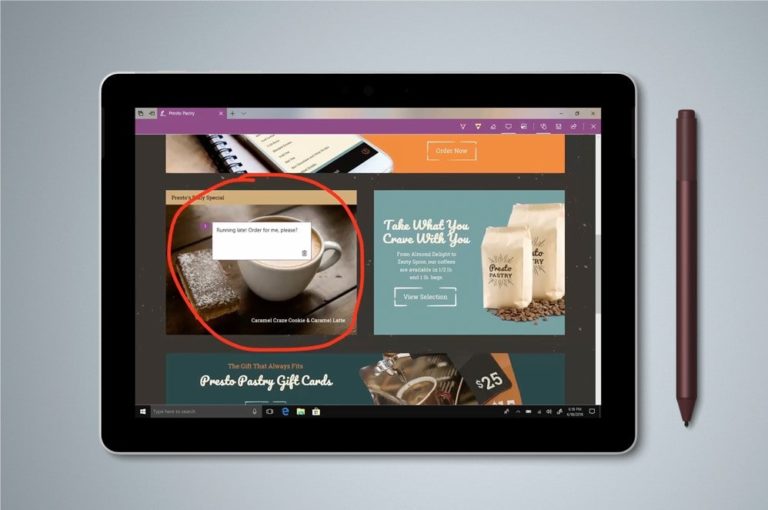 The Microsoft Surface Go is back to its roots. A smaller, lighter version of the Surface 3 circa 2015. Its a 10″ hybrid that was missing from the range.

I have an original Surface 3. Rather I had one, but my wife pinched it as her travel companion. You see at 633g it fits into the Tardis-like handbags women are wont to travel with. It is an excellent Kindle reader and plays FHD movies and has Bluetooth for headphones.

But not knowing the limits of its Atom x7 SoC she even uses it as a work-horse device on-site at conferences. Plug in an external screen via its mini-DisplayPort, a USB dongle with Ethernet and dual USB ports, a portable Canon printer and even a data projector. It runs Office 365, remote desktop, Events software, and more with ease.

I have offered her the later Surface Pro with a 12.3” screen, but it is just a little bigger and heavier. Enter Surface Go. It is even smaller and lighter (522g) than the original so I fear we may have to update!

It is for those on the go offering a full-fat Windows 10 experience in a smaller Surface-like device. By that we mean it runs Office 365, Outlook, browsers, connects to networks, printers and a vast array of USB devices.

At $599 for the 4/64GB model and $839 for the 8/128GB (both sans keyboard) it has the features and build quality for the education market too. There is a 5% discount for eligible students, parents and teachers

Its prime competitor, at least in some vertical markets, is the 9.7” iPad, also at $599 for the 128GB model. These also have an optional pen and keyboard. But as iOS serves one market Windows serves another. Around 85% of the world’s desktops/laptops use Windows 10.

Other products in the Surface Range

Surface is a family of devices. Go is now the entry level at 10”.

But I am a little disappointed that it did not go for smaller bezels – yes I know you need to use it as a tablet and need grip space!

Playing a movie leaves 25mm black bars top and bottom. The image size is 21cm wide and 100cm tall. You can zoom to fill the screen, but you lose about 30mm from each side of the image.

3:2 is best for productivity. Word can show almost a full-width A4 sheet x 16 lines.

Windows S mode to a power user is damned frustrating. It will only run apps from the Windows Store, and I use testing apps not available there. OK, you can convert it to Windows Home for free.

For that, you must have a Microsoft Account (meaning you can’t use a local login and it then installs the full version). OK, I used my account, and now the demo machine (that must go back) is linked to me.

OK, I see the point of a locked down S Mode in education, and yes, it is free to upgrade.

BTW Microsoft says the idea of S Mode is that all applications are vetted for security and won’t bog down your system. For novice users or those who want the simplest and easiest to manage Windows, most of S Mode is great.

The Intel Pentium Gold 44157 processor is a two-core 1.6GHz with a very low Thermal Design Power of 4.5-6W. It does not have turbo boost, so its single core performance is well below an Intel m3-Y730 available in the Surface Pro 2017.

The GPU Is an Intel HD Graphics 615 that supports up to three displays (internal and two external) – either 2 x 1080p or one x 4K. If you intend to run dual screens, I suggest the 8GB RAM version as it shares system memory with video memory.

Under full load, the maximum temperature was 36° – as expected.

It states it is good for email, web browsing, audio and video playback. The GPU is too low to play all but browser-based games.

Still, Microsoft doesn’t claim any more than that, and for Joe and Jane average it is great.

The test unit has a 128GB Toshiba PCIe 3.0 x 2 lane NVMe SSD. The 64GB version uses much slower eMMC memory. Still, why pay for speed you don’t need, and it has a microSD slot for cheap expansion.

Overall I am entirely happy with the power and speed of the 8/128GB for general office and home use.

One of the strengths of the Surface range is that they use a quality Wi-Fi adapter. This one is excellent – Qualcomm Atheros QCA61x4A which is a 2 x 2 multi-user, MU-MIMO.

It gets 867Mbps at two metres from our D-Link AC5300 router. But it doggedly hangs on and maintains that speed out to 20 metres. It drops to 780Mbps at 30 metres! This is amazing and bests any other I have tested.

It has a Microsoft standard ribbon charge/data port and a single USB-C 3.0 port (5Gbps half-duplex), so data transfer tops out at 3.2Gbps. We tested it with a range of dongles for power delivery and HDMI output.

It does support an external 4K@24Hz monitor and specifications say it supports it at 60Hz over DisplayPort (not tested).

We tested with a Microsoft Surface Dock at $299.95. It worked flawlessly with Dual FHD monitors, four USB 3.0 ports and gigabit ethernet. The Dock connects via the ribbon connector which has higher data transfer rate (not specified but probably 10GBps full-duplex) than the USB-C 3.0 port.

We tested with USB-C dongles as well. Our recommendation is the Laser Multiport Hub at $149.95 or the Laser multiport plus ethernet at $199.95. These dongles will pass through power to 10W. The Surface Go will charge, albeit slower from a USB-C 5V/2A or Qualcomm Quick Charge 2.0/3.0.

We also tested it with a Laser 20,000mAh USB-C Power Bank at $129.95, and it will charge off that too. Very handy for travellers as it will almost double battery life.

What this shows is that it is a flexible device. Use the ribbon charger at your desk and a USB-C Power Bank or USB-C charger on the go.

It would be unfair to comment on quality as these cameras are perfectly adequate for ‘social media’ shots.

The rear camera captured whiteboard and blackboard shots under office lighting. Colours were good in both day and office light.

It uses a standard Realtek High Definition chip. The Realtek Audio console has a switch for Dolby Audio (turn it on) and its capable of a maximum 24-bit/48,000Hz sound.

There is a 3.5mm combo jack for buds and a mic. It has a front-facing mic

There is virtually no bass to 500Hz, strong mids to 5kHz and some treble to 12kHz. This is a bright vocal sound signature optimised for voice.

The real test is listening to music or movies. It is not unpleasant, but the lack of bass makes it sound shrill at higher volumes.

Fortunately using our reference Sony WH-1000XM2 headphones things returned to normal with as good a frequency response as you can get over a standard Bluetooth SBC codec. Bass was good, and there were clear, crisp vocals.

The Alcantara covered type cover is a necessity for productivity. It has a 1mm travel and about 40g activation. Keys are approximately 15mm square but more tightly spaced. It’s smaller than you expect.

In typing tests, I managed to get 80wpm and 75% accuracy. On a Logitech G613 mechanical keyboard, I usually achieve 100wpm and 95% accuracy. After a few hours that increased but not significantly.

Keys are slightly clicky (you need this for feedback) but the key bounce is more pronounced due to the thin keyboard/cover.

Its fine for quick tomes but not a patch on its Surface Pro or Book keyboards. If this takes off – sales wise and I think it will – we should see a Brydge keyboard that I love on my Surface Pro 2017.

The trackpad is smooth and responsive. In one swipe it covers about 60% of the travel from top right to bottom left of the screen.

The magnetic pen is an active (AAAA battery operated) stylus (HB tip supplied but are changeable) and interfaces with the N-Trig digitiser in the screen.

Those 4096 pressure levels (up from 1024) and 12g actuation force add a new dimension to pen use and things like tilt (for a wider line) make it intuitive to use. It has right click and erase as well as configurable functionality. And it draws lines consistently – not hit and miss like often happened with the previous pen.

Microsoft claims nine hours with 1080p video in aeroplane mode. In our video loop at 50% screen brightness, aeroplane mode and power mode set for best battery life we manage to get just over eight hours.

At full charge, it indicated about eight hours remaining. In general office use, it then achieved about five hours.

It is well built although I suggest a tempered glass protector as a precaution. Gorilla Glass 3 is more about smudge resistance that drop resistance.

The hinged kickstand is a Surface signature and can bend back to 165° (nearly flat). Because of its smaller footprint its easier to use on a plane.

GadgetGuy’s take. Surface Go is growing on me

OK, I will admit that when I started this review – nearly six hours ago I was a little put off the small screen and keyboard and frustrated with Windows 10 S Mode. But it does grow on you and will win you over.

It is for those that want Windows 10 on the go and don’t want to stuff around with an Android or iOS tablet trying to get them to work. For example, all I had to do was enter the IP address of the My Cloud, and it was sharing it – try that on iOS or Android. It found my HP printer, recognised by Samsung Galaxy Note 9 and everything I used with it. Interoperability is the key benefit of Windows.

It’s everything you expect from a Surface device – only smaller. My wife (mentioned earlier who has an original Surface 3) is now eyeing it off. Sorry dear, it must go back!

Microsoft gives an extended loan to GadgetGuy – do your worst!

In the review, we were not able to turf Windows 10S and really become one with the machine. Microsoft has given us permission to ditch 10S and do what we will, using it for a month or so.  While the review is 100% accurate the machine grew on us and we now really like it. If you are interested in a small Windows 10 hybrid then read our update here.

The Asus transformer Mini has a great Surface-like design but with an Atom X5 and 1280 x 800 TFT screen its not a direct competitor.

You have to rate it as a Windows 10 tablet with optional ‘benefits’.