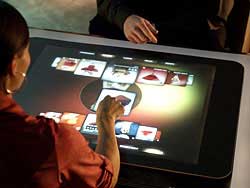 Picture a surface that can recognize physical objects from a paintbrush to a cell phone and allows hands-on, direct control of content such as photos, music and maps. Microsoft Surface turns an ordinary tabletop into a vibrant, dynamic surface that provides effortless interaction with all forms of digital content through natural gestures, touch and physical objects. Beginning at the end of 2007, consumers will be able to interact with Surface in hotels, retail establishments, restaurants and public entertainment venues.

The intuitive user interface works without a traditional mouse or keyboard, allowing people to interact with content and information on their own or collaboratively with their friends and families, just like in the real world. Surface is a 30-inch display in a table-like form factor that small groups can use at the same time. From digital finger painting to a virtual concierge, Surface brings natural interaction to the digital world in a new and exciting way.

Microsoft Surface puts people in control of their experiences with technology, making everyday tasks entertaining, enjoyable and efficient. Imagine ordering a beverage during a meal with just the tap of a finger. Imagine quickly browsing through music and dragging favorite songs onto a personal playlist by moving a finger across the screen.

Surface also features the ability to recognize physical objects that have identification tags similar to bar codes. This means that when a customer simply sets a wine glass on the surface of a table, a restaurant could provide them with information about the wine they’re ordering, pictures of the vineyard it came from and suggested food pairings tailored to that evening’s menu. The experience could become completely immersive, letting users access information on the wine-growing region and even look at recommended hotels and plan a trip without leaving the table.

Surface computing at Microsoft is an outgrowth of a collaborative effort between the Microsoft Hardware and Microsoft Research teams, which were struck by the opportunity to create technology that would bridge the physical and virtual worlds. What started as a high-level concept grew into a prototype and evolved to today’s market-ready product that will transform the way people shop, dine, entertain and live. It’s a major advancement that moves beyond the traditional user interface to a more natural way of interacting with information. Surface computing, which Microsoft has been working on for a number of years, features four key attributes: