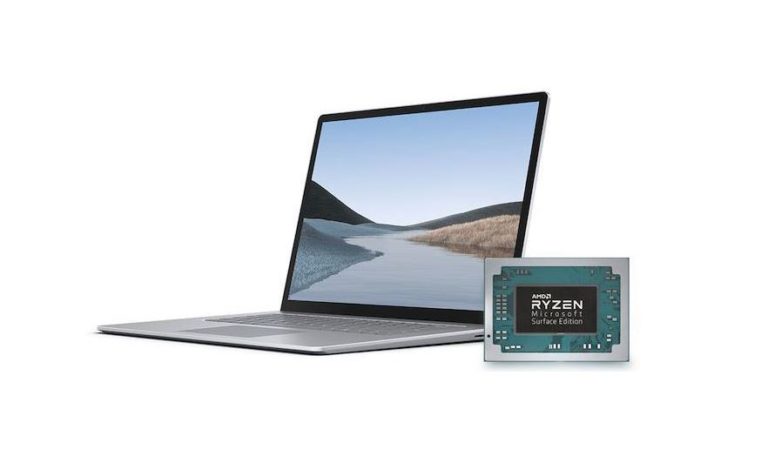 Moving the Microsoft Surface Laptop 3 – 15-inch to AMD represents a significant departure for Microsoft although it uses AMD processors in the Xbox. It’s a big win for AMD to have its processors in such a mainstream device.

Does AMD make a vast difference over Intel? The tests indicate no. Microsoft Surface Laptop 3 – 15-inch is an excellent product with no downsides. And Surface remains the best 3:2 ratio screen option for those that favour productivity over games.

But Intel fans are going to look at some of the Intel i5/i7/i9 options on offer from Dell, Acer, HP, Lenovo and more at competitive prices. Or settle for the Microsoft Surface Laptop 3 – 13.5-inch with 10th generation Core i5-1035G7 or i7-1065G7 processors.

So, if you don’t mind AMD (and you shouldn’t) then read on because Surface ‘anything’ is Microsoft’s licence to give us what it feels we need.

If you are a power user, then buy the 16GB version because the ram is not upgradeable. Storage is immaterial as you can get high-speed external 256GB SSDs for under $100.

Big and black – did I mention black with a vast touchpad and deck to rest my weary palms. I am glad that they don’t offer that sissy Alcantara faux suede on a ‘man’s machine.’ Give me aircraft-grade, milled aluminium any day.

In reality, it is a perfectly scaled up 13.5-inch Laptop 3. As usual, the Microsoft boffins have put a lot of thought into this new design. For example, the screen is a one-finger lift held down by magnets and lifted from a very slight overhang.

The Surface Laptop 3 display opens about 150° and supports the Surface Pen although I venture that it’s a little harder to use on a clamshell than on the Surface Pro.

In all its one of the sexier all black, slabs I have ever seen.

Me, I prefer x360 hinges or the Surface Pro tablet with a kickstand. But some feel more comfortable with a traditional clamshell-style laptop – something that can sit on your lap or desk.

But importantly it is part of the Surface range including the Pro, Pro X, Hub, Studio and more – all with unique Surface styling cues and that almost unique 3:2 ratio screen.

In reality, it is a Sharp LQ150P1JX51 panel made especially for the Microsoft Surface Laptop 3. It is Sharp factory calibrated to 100% sRGB, Delta E <1 and also offers an enhanced mode (saturated). That equates to about 64% Adobe RGB. Unfortunately, you can’t adjust the calibration using a Calman camera, but you can find various profiles on the web to change them.

A few very minor quibbles. The laptop screen has a tad of ‘touch wobble’, and a glossy finish impairs daylight readability. The 383 lumens are bright, but we measured .4 nits black, reducing the contrast to 1100:1 (claim 1500:1). Now tests are tests, and for most users, this is a great screen.

We know Microsoft use some secret sauce to get such a responsive touch screen – iFixit has revealed that it uses its own designed ICs – X904169 and X904163 based on N-Trig digitiser technology.

But it would be nice if the next Surface Laptop 4 moves towards wider AdobeRGB and DCI-P3 gamut displays, HDR and get rid of those bezels – ‘just saying is all’ as its competitors are ahead there.

Processor – PASS for productivity but FAIL for serious gamers

Microsoft and AMD have developed a special version of the AMD Ryzen 5 and 7 Series 3000 processor. Let me repeat that there is no downside at all, and the processor is a good fit.

It is an important move for AMD and Microsoft. In part that is to be ‘exclusive’ to Microsoft Laptop 3 – 15-inch and in part designed to suit the ultra-slim form factor. It obviously works well as in a 15 minute, 100% load throttling test it did not overheat or drop speed.

In fact, respected NotebookCheck says it is 13% slower than the Intel Core i5-1035 in the 13.5-inch counterpart.

But we have to warn you that being over technical overlooks user scenarios. This chip more than meets the needs for office productivity and content consumption.

Note: There is a significant difference in performance on 240V power versus battery.

GPU – PASS for productivity and content but FAIL for gamers

AMD Vega 9 means nine cores. The 3:2 screen is difficult for gamers anyway. Add that together, and the Surface Laptop 3 has a pretty respectable GPU for productivity and content consumption.

Microsoft claims 11.5 hours real-world use, but the Windows defaults are heavily optimised towards battery life. In reality, you need a better default balance of screen brightness and performance. We expect about 8-9 hours of light use.

Quick charge up to 80% in an hour (claim) and we tested a full charge two hours (1.5 hours claim)

The Surface Laptop 2 set the standard with 1.5mm throw and 50g actuation. This time around the keys are more recessed into the deck and throw is 1.3mm and 40g – we consider it a backwards step.

However, it still provides a great typing experience with little bounce. It has three stage-backlighting.

The oversized trackpad supports 10-finger touch, e.g. pinch, zoom, etc., – it is responsive and great as it will move the cursor from top right to bottom left in one swipe obviating the need for a separate mouse.

It will also decode Dolby Atmos to the speakers and output to BT or 3.5mm headphones.

If you are not familiar with Hello, it is all about using your face to log in. The unit has a special IR camera alongside the web camera that does facial recognition and checks the image is from a human rather than a photo. While it is not mandatory to use it – give it a go, and you will find it is as fast as typing in a password or pin. I had 100% success with this.

The bottom panel is removable – see iFixit Teardown, and it scores 5-out-of-10 for repairability.

But, and this is a pet hate of a reviewer – Microsoft makes it impossible to set up initially as a local account. You must have MS account to install and then can swap to local, but by that time your MS Photo and details are firmly entrenched into the system, and your smiling visage shows up in MS Edge as logged in.

Finally, the Surface Laptop 3 comes of age with the right proportions, a fantastic PixelSense screen and pen support (albeit an expensive optional extra). And no more Windows 10 S either!

We like the AMD SoC, but it is not up there with the Intel 10th gen in the 13.5”. Still, it is all about what you can do with it and for office, productivity and content consumption it is great.

But some other things just don’t thrill us. With USB-C 5Gbps only it is hamstrung as a dual-screen device. It seems hobbled compared to its 13.5-inch brother – no Wi-Fi AX, slower speeds than the Intel 10th gen processor etc.

And there are some terrific, more fully-featured Ultra-lights out there with 9th and 10th Gen Intel Core and Thunderbolt 3.

Despite that I suspect Microsoft will sell heaps – it is pretty good – not superb.

Features
8
Value for money
7
Performance
8
Ease of Use
9
Design
10
Reader Rating0 Votes
0
Positives
Imposing looks
Brilliant screen
Easier to service but few user-serviceable parts inside
AMD Ryzen 5 processor has no downsides
Negatives
Shallow keyboard – not as good a Laptop 2
Battery life – not as good as Laptop 2
Not really user-replaceable M2 2230 SSD
Soldered in ram
Expensive – that will lead to looking at other brands
8.4