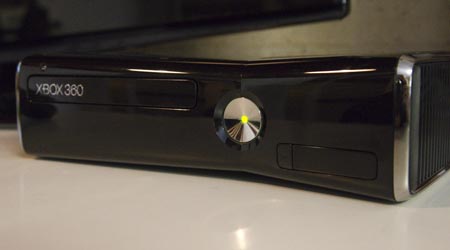 Almost five years have passed since the release of Microsoft’s second video game console, the Xbox 360. Now, Microsoft has seen fit to change the design, and while many of the changes here appear cosmetic, the truth is that the new Xbox 360 is quieter, slimmer, and more stable than the previous iteration.

Measurements show Microsoft has trimmed the old Xbox 360 console, with the new version more than 3cm shorter and 1cm thinner. It certainly looks less chunky and, as with the previous model, can be stood upright or laid flat to suit the requirements of your AV rack. The box also sports a slightly tapered ‘waist’ so that, in the standing position, it appears ‘X’-like if you squint.
The 20, 60, and 120GB capacities available previously on the 360 have been upped to 250GB, and with the ability to now download movies from online rental services, this is a sensible (and necessary) move. The HDD now resides within the 360 chassis, and is more easily upgradeable, but the new design means you can’t just grab your hard drive and pop on over to your friend’s house to show them what you grabbed from Xbox Live Arcade.
Wireless in the form of built-in 802.11n is now included, and it’s a welcome upgrade. For owners of the older Xbox 360, WiFi means stumping up for a  $150 wireless adaptor.
HDMI has also been thrown in, and this, too, is long overdue. This means you can now connect the Xbox via a single cable to high definition televisions or AV receivers.

We were keen to see if Microsoft had dealt with the high level of operating noise that characterised the older model 360 and, while drive noise remains audible, the console is definitely quieter, with less hum and fan ‘chuffing’ than the original.
The new model also provides touch-sensitive buttons that emit sound, a feature that will make gamers think of the PlayStation 3. While we like touch-sensitive buttons, the noises from the Power and Eject buttons annoyed us. They’re loud, high pitched and not adjustable. We much prefer the silent operation of buttons on the original 360.
It’s now impossible to experience the notorious “red ring of death” that plagued Xbox 360 owners. Previously, hardware failures produced three red lights around the power button and was a sign that your Xbox 360 had died. While we’re not sure if the technology has been fixed so that it’s impossible for the same problem to occur, we can tell you that the red lights have been removed, making the legendary error code different.
Microsoft is clearly catering to first-time buyers, with the new 360, as the package omits a cable essential for porting stored data from existing consoles to the new model. The $25 “Xbox 360 Data Transfer Cable” makes the job a quick and easy affair, but should you wish to forgo the purchase, you’ll need to move any information stored on the drive of an older 360 console via a USB key. This process could take a long time if you have a lot of data stored on the hard drive.
Microsoft has also been scabby with the cables it supplies in the box too. Standard definition-grade RCA audio-video cable are all that’s on offer, and while the PS3 doesn’t provide anything better, the older Xbox came with component video cables that allowed you to take advantage of the console’s high definition capabilities, straight out of the box. Its a miserly and retrograde step from Microsoft, which would surely benefit from the good will that would flow from mating its $450 play centre to equally premium cables.

If it’s an upgrade you’re after, added WiFi and HDMI probably aren’t going to be compelling enough to make you want to spend money on a the revamped 360. And with the new Kinect motion gaming accessory compatible with existing 360s, you won’t be locked out of any new experiences either.
If you don’t already have an Xbox, the new 250GB model is the best-specced 360 yet. Put one in the living room to do duty as your primary games centre, or mate it to an existing console for multi-player gaming over a home network, or for streaming music and video to remote rooms. If will even deliver Pay TV channels to a second room when setup as part of a Foxtel multi-room package.
Overall
Reader Rating0 Votes
Smaller; Wireless added with WiFi 802.11n; 250GB is a welcome upgrade for hard drive space;
Hard drive can no longer be detached easily; Only standard definition cables included in the box; Current Xbox owners will need to fork out an extra $25 to move their data across quickly; Loud high-pitched buttons get annoying quickly
4