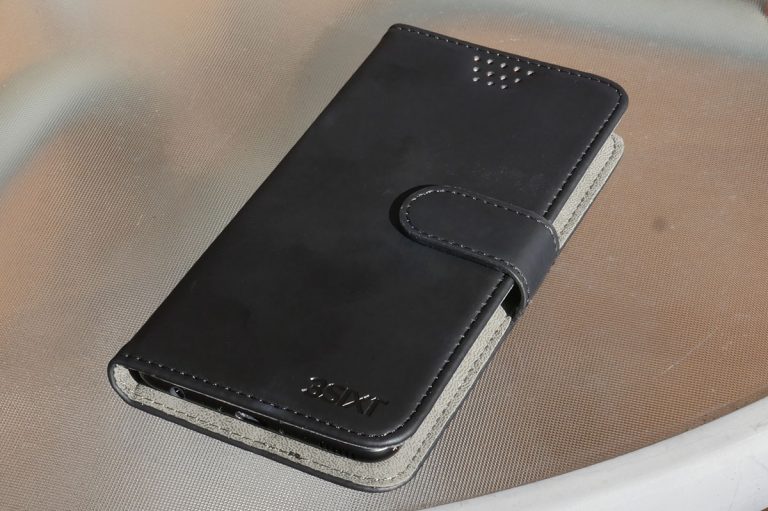 When a new iPhone model is imminent, or the Samsung Galaxy SX is about to be launched, it seems that third party manufacturers are provided information about the new models. No doubt on signing a Non-Disclosure Agreement with terms involving the forfeiture of first borns should it be breached, they must receive sufficiently detailed physical specifications to allow the design of cases for the new models.

How else to explain the launch of cases for new models at the same time the phone is launched?

That’s fine for Samsung Galaxy and iPhone owners. And, to a lesser extent, those with phones from Sony, Motorola, LG, Google, HTC and a couple of other brands. But choices for those are limited, and what about Oppo? Alcatel? Huawei? ZTE? Kogan? And no doubt others which have slipped my mind.

Now 3SIXT has launched two fancy cases designed for use with any phone up to a certain size. Called the “Universal Book Wallet”, one is for phones with a screen up to four inches, while the other is for larger 5.2 inch phones.

Both have a nice, black leatherette finish on the outside. I’m assuming it’s not leather, even though it feels like it, because I’m sure there’d be an explicit claim to that effect if it were. The inside cover has a suede-like feel. A strap folds over from the back to the front, holding the cover closed. This is held lightly by magnet, so there’s no struggle with engaging or releasing it, but it’s held sufficiently firmly so that it won’t come undone, releasing the front cover, as the phone slips from your fingers and falls to  the ground.

There are two slots for credit cards and so forth on the inside cover, and perforations on the cover above where the speaker or earpiece of the phone would normally be to allow sound to come out.

Here’s the tricky bit: how do you attach a phone to a universal case? You want to be able to access the important things even though their location on the particular phone is unknown to the case maker. Those things: fingerprint scanner, side buttons and camera.

If the fingerprint scanner is on the back of the phone, then these cases aren’t suitable because it will be either inaccessible, or accessible only after sliding the phone up (we’ll return to that), which would kind of negate the ease-of-unlocking point of a fingerprint scanner. The buttons on the right side of the phone are easily accessible since that is where the opening is. The buttons on the left side are easily accessible with the cover open. While the front and back covers are stiff, the spine joining the front and back is soft and flexible. Once you practice a bit to learn their location, you’ll be able to push the left side buttons right through the material.

That leaves the camera. On the inside of the back cover is a thin plastic assembly, with a plate which can slide up and down within the assembly. On the face of that plate is an adhesive. The plate is spring loaded so that in snaps firmly to either the top of bottom of its range of travel.

You pull off the plastic covering the adhesive, and attach the back of your phone to the case. There, fitted! When you want to take a photo, you just slide the phone up so that the camera comes clear of the case.

That will work very nicely with many, many phones. But not all. It largely depends on whether there’s a camera bump, and if so, where it is. For example, the Moto G5 Plus I reviewed the other day has its bump stretching down to 43mm from the top of the phone. There’s only 21mm above the mounting assembly at the top of the 5.2 inch case. You simply can’t mount that phone in it.

However the Huawei P10 (reviewed here) doesn’t have a bump as such. Neither does the Oppo A57 (reviewed here). Both fitted very smartly in the 5.2 inch case. The HTC U11 (see the review next week) is a little too wide and tall, overlapping the case slightly. The new Blackberry KEYone phone (review soon) has a camera bump, but it’s up at the top so it clears the mounting plates.

I didn’t have a small phone on hand to try with the four inch case, but similar considerations would apply. There’s only 10mm of space at the top of this case for a camera bump.

The good news is that the packaging of both cases can be opened non-destructively, so it this looks like it might suit your phone, go down to Optus, Telstra, Virgin or The Good Guys and try it on for size.

Incidentally, both cases come with an adhesive screen protector which you can cut down to size.

Both sizes of the 3SIXT Universal Book Wallet are available for $24.95 each.