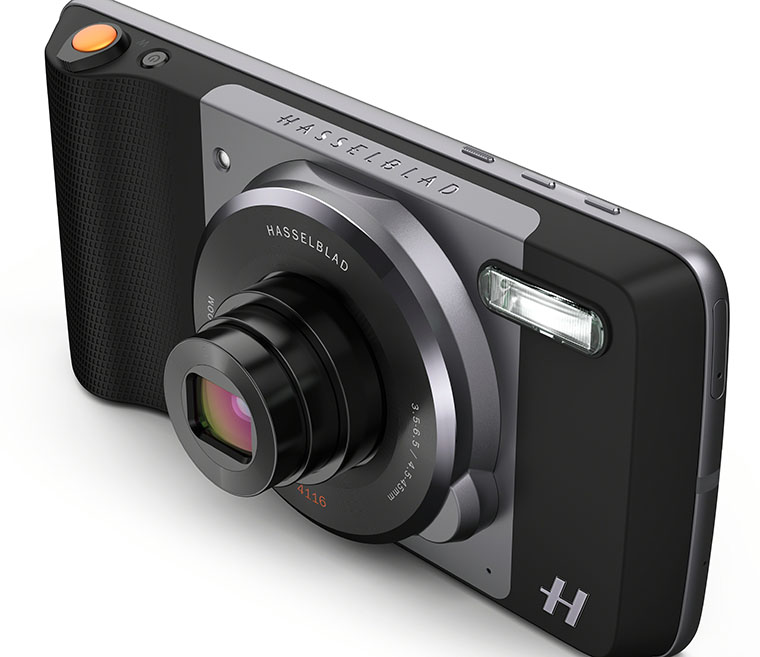 My review the other day of the Motorola Moto Z smart phone threatened to become interminable, so detailed coverage of the three most active Moto Mods – the devices which attach to it and make it so much more – had to be offloaded to this article.  Those Moto Mods are the JBL SoundBoost Speaker, The Hasselblad TrueZoom Camera and the Instashare Projector.

Remember, all of these attach easily. Four strong magnets hold them in place securely enough to allow one or other of them to be kept on all the time, yet they’re easy to pull off again in a second.

So, let’s see what they do and how well they do it.

Let’s face it, a smart phone with decent sound quality has yet to be invented. And the better the phone, the harder it gets because for phones, “better” goes with “thinner”, while for speakers “better” goes with “bigger”. Thus we have the JBL SoundBoost Speaker. This is bigger. It snaps onto the back and has the necessary camera hole to fit the Moto Z. There are two 27mm speaker drivers built in and up to three watts of power for each of them.

JBL says that they’re good for up to 80dB sound pressure level, measured at half a metre and can deliver frequencies from 200 to 20,000 hertz. Few compact Bluetooth speaker makers bother offering specifications, but I’m confident those ones exceed what most of them are capable of.

SoundBoost has a 1000mAh battery built in which is charged via a USB Type-C port on the face which mates with the phone, so I thought that might preclude it from charging or running from external power while in use. But it turns out that when it place it is charged by the normal phone power connection as well. JBL says that a full charge is good for ten hours of music. It does not draw from the phone’s power.

Carrying around the phone with the SoundBoost attached bumps it up from 5.2mm to 18.4mm thick by my measurement, which roughly accords with the 13mm thickness it is specified to have. There’s an alloy kick stand that levers out so the phone can stand up at an angle.

It sounds pretty good and almost incomparably better than any phone. It is lively and boppy and sketches out enough of the upper bass to give a good musical sense of what’s going on. It goes’s surprisingly loud without excessive distortion.

The kick stand is a bit useless. Sure, it looks cool but it leaves the speaker angled down at the desk behind the phone, and that detracts from the sound noticeably. If you can live without looking at track information, just put the phone face down on the desk and let the speakers shoot straight upwards.

If I had a Moto Z phone, the JBL SoundBoost Speaker would be on my must have list.

The Instashare Projector must be the most unexpected snap-on I could think of for a smart phone. It is a DLP projector with WVGA resolution – 854 by 480 pixels – delivered at 50 lumens. I imagine the “lamp” is a LED. The contrast ratio is 400:1 and it is specified to produce a picture up to 70 inches in the diagonal. It is powered by the built in 1100mAh battery which is rated at up to sixty minutes of operation.

Again, it just snaps in place, with a hole allowing the Moto Z camera to operate normally. An aluminium panel hinged at one end can swing down to allow the projector to fire upwards at an angle.

Basic operation is super easy. Snap it into place on the phone, unlock your phone and hold in the power button on the Projector for a couple of seconds. It goes up to full brightness more or less instantly and it simply mirrors whatever is on the screen. The orientation matches the screen, too, so the home screen will be shown in “portrait” mode, as will photos and videos taken with the phone held upright. But the picture swings automatically into landscape mode if that’s the way it was taken.

It has a trick up its sleeve: automatic keystone correction. That is, if the projector is firing up at an angle, which means what should be a rectangular picture on the screen is distorted into a trapezoid, its shape is electronically corrected. This can be switched off.

Up close a decently bright image up to about 30 inches (75cm) can be shown on any white surface under regular room lights. Things get a bit too dim beyond that. Used with the projection screen in my office with the lights turned out, an okay image up to the claimed 70 inches was possible (180cm) when my eyes had a chance to adjust.

The colours are reasonably bright, although not especially accurate. Remember, the phone screen is also visible so immediate comparisons are inevitable.

But the main limitation isn’t brightness. It’s resolution. The screen door effect is quite prominent – that’s the grid of black between the displayed pixels. And the downscaling of the image makes the image quite soft. Especially in portrait mode, when 2560 pixels are being scaled down to 480 pixels.

I feel pretty silly making these points because this projector is not for displaying high quality cinema but sharing things on your phone with your friends. The question is not how well it can do it, but that it can do it at all, a feature which I think may well be unique.

The only real complaint I’d have is the difficulty of achieving a good focus, with the thumb wheel set in a little under the phone body and placed very close to its power button.

The cameras in today’s higher quality smart phones are really quite amazing. They’re so much better than compact cameras of just a few years ago. And they manage this with tiny lenses and focal lengths of just four millimetres or so.

However that does limit them when it comes to telephoto zooming. Few can provide an optical zoom, and it’s probably physically impossible to provide an effective telephoto effect. But snap the Hasselblad TrueZoom Camera to the back of a Moto Z and you have ten times telephoto zoom ranging from (speaking in 35mm equivalent terms) 25mm to 250mm. That’s from a respectable wide angle to verging on super telephoto. There’s also a 4x digital zoom which should be left switched off.

The camera body adds 15mm to the phone’s regular 5.2mm thickness, and when at full zoom the lens extends out to around 62mm, including the phone body. It draws its power from the phone’s battery.

The camera’s maximum aperture ranges from f/3.5 to f/6.5, so low light performance can actually be more limited that the phone’s own camera with its f/1.8 aperture. There’s optical image stabilisation when taking photos. ISO settings from 100 to 3200 are available, along with Auto.

A 1/2.3 inch CMOS sensor is used with 12 megapixels of resolution (4000 by 2992 pixels). A real Xenon flash is fitted to the camera, as is a two step shutter button like that on a real camera, so you can half press for focus and then complete the shot.

A reasonable amount of pressure was required for that. But you can use the regular focus point and shutter controls within the camera app.

The same manual controls are available within the app as for the phone’s built in camera, so a great deal of control is available. One additional option appears in the app with this camera attached, giving the ability to select RAW plus JPEG storage. RAW skips the camera processing, giving a purer result from the camera’s optics.

With the minimum focal length the camera attachment gives a similar field of view to the built in camera. I took a few comparison shots and found, rather surprisingly, that the pictures from the built in camera were higher quality. They were generally a touch sharper on the focal object and provided a little more detail in darker areas of the image.

But what the built in camera couldn’t do was bring the subject closer for more detail. The Hasselblad attachment could do that extremely well.

So what this offers is flexibility. I’d strongly consider taking this with me on tourist trips. And the nice thing is, if the regular field of view from the phone camera is suitable, you go for its higher quality just by whipping the camera back off.