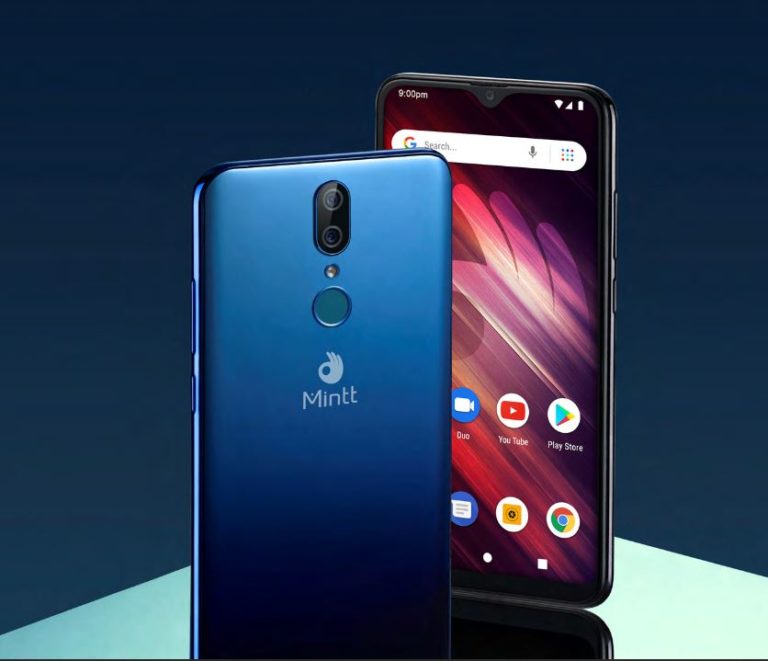 Mintt is a new Australian smartphone brand – you may have seen it recently on Channel 9’s ‘The Block’. The Mintt UltraMintt X3 is its second most expensive offering – if you call $265 expensive.

We set out to analyse the Mintt UltraMintt X3 and why it offers so much for a paltry $265. It has a reasonable processor, battery, two-year swap warranty, Android 9 (10 coming) and more. Is there a catch?

The only catch is that Mintt is a new Australian company so we put it through due diligence first to check its bona fides and they are all good.

Mintt has a range of lower-cost phones from $179 that we will review when we can. We have completed the $399 Ultramintt Y3 here, and it punches well above its weight with a triple camera, Qi charging and so much more.

Q: How can Mintt make such low cost, well-featured phones?
A: Read the Mintt Ultramintt Y3 review for that answer.

The Mintt UltraMintt X3 is basically the same as Blu G9 (a US company that requires robust FCC certification for each handset). That makes me a lot more confident that this is a tried and tested ODM model.

Price: $265 from Mintt online only

Mintt is an Australian company (partnering with Mintt Global that operates mainly in PNG and South-East Asia). All Mintt Australia smartphones have RCM (C-tick) certification. They are fully compliant with all Australian Communications and Media Authority (ACMA) requirements for use in Australia.

This means it has the Australian firmware and LTE bands to work on all Australian Telco carrier networks and can make an 000-emergency call (not 911) without a SIM.

We develop extensive paradigms – what it must meet or exceed – and then slot them into market segments.

The basket of features in the Mintt UltraMintt X3 make it an offering you should consider.

It is a 2.5 (curved edge), waterdrop glass slab with a pretty cobalt blue gradient back – yes, it is a HUGE fingerprint magnet.

The back is 2.5D mirror metallic (probably painted polycarbonate) over a similar synthetic frame.

Dual cameras sit in the middle centre with a single LED flash below. There is a rear fingerprint sensor with the MIntt OK logo are below that.

It has a pre-fitted screen protector and smallish bezels. Overall it appears well made and durable. It is a cut above the typical mass-market finish.

It is a 720p screen typical of mass-market devices. Although it has reasonable brightness the automatic peak brightness favours battery life, it is not good in direct sunlight.

Colour reproduction, viewing angles, brightness and contrast ratios are average. It has a cool bluish cast that affects colours.

I strongly suspect this is not an IPS panel issue. Rather it could be fixed by a firmware update or MTK’s MiraVision – we would suggest Mintt address this in a future update.

Summary: In this price bracket, all you can expect is 720p, so it meets this paradigm.

We have not seen the Helio P22 before, but it is in the Motorola E6, LG K40, Nokia 3.1 Plus, Alcatel 5V, and many more phones mainly sold it the Indian, Asian or Chinese markets.

The new version of Geek Bench 5 has changed ratings that appear approx. 80% lower than GeekBench4 (multiply by five).

We found it quite smooth, but you will notice it slows with any CPU/GPU intensive app. We put that down to 3GB of RAM, but hey, it will still run Android 10.

It would not run GeekBench 5 Compute benchmark – we suspect this is to do with the non-standard GPU.

GPU: The PowerVR Rogue GE8320 handles a 720p screen nicely. It is most often compared to a Qualcomm Adreno 4XX but in our benchmarking it was about 30% slower on most video tasks.

Game use: The CPU/GPU is not great for games. It should support most 2D mobile games to 25fps.

Throttling: A 15-minute test went from 71,447GIPS to 58,872GIPS (Average 64,446) effectively keeping 94% capacity after four minutes. There is always some throttling, but this reflects good heat management.

Temperature: at 100% load for 15 minutes the SoC reaches 62° (internal), but the battery and other components are no more than 32°. Outside it is even cooler at 10° (ambient inside temperature 17°). This is all within specification.

Summary: Our only issue is that MediaTek SoCs don’t play well with our testing software. However, it is a decent SoC commonly found in mass-market devices.

Using Cell Info the 5GHz Signal strength at 5 meters from our reference D-Link AC5300 router is -54dBm and 78Mbps (about as much as you can expect for Wi-Fi N 5GHz).

GPS is accurate to within 10 metres, but as it uses A-GPS to locate satellites, it can take a minute or more. It is adequate for turn-by-turn navigation and route recalculation if you are not in a hurry!

Signal strength is excellent at -89dBm. Our reference Samsung Galaxy Note9  is -101dBm (lower is better) – this is great in a weak reception area.

As I have come to expect of 2019 technology, the UltraMintt X3 found the next nearest Telco tower at -95dBM (the Note9 does not).

That this is a phone for Australia but lacks band 40 (that may affect Optus users in Canberra).

It does not have many world LTE bands activated.

There are three tests – 3.5mm buds, BT headphones and the mono speakers.

The 3.5mm buds are average at best. I cannot measure frequency response, but there is no hint of bass, peaking mids and limited treble – mid-centric for clear voice.

Our reference Sony WH-1000Xm3 are wasted on SDB Codecs but we use them to detect crosstalk ad maximum volume. BT 5.0 is a nice touch (at this price), and the sound is clear, undistorted and strong.

We use spectrum analysis to determine the sound signature of the down-firing mono speaker. We make it clear that if any, lower-priced phones have a decent speaker.

This is a ‘tinny’ analytical signature, way too harsh for music pleasure.

Our test software indicates a 3950mAh battery – that is not so much of an issue as batteries are typically rated at nominal capacity.

Recharge with the standard 5V/2A charger from 0-100% takes under four hours. This is a little slower than the claimed 2.5 hours but acceptable. PS: Mintt please let your markets know that 5V/2A is not ‘quick charging’.

Summary: The battery is large for this class of device. We expect it to go 24-36 hours under typical use.

It is well made, no gaps and no #bendgate. The 2-year swap warranty via Australia-post is good. Although in practice you first send your phone back for a quick assessment and if it is a warranty claim (not user caused) a replacement is immediately sent. We understand that the process takes less than a week. Mintt claims a .05% failure rate – that is excellent.

Mintt does not have many accessories. You can buy a Pleather flip case for $29, and you can buy Blu G9 accessories at most online markets.

The fingerprint reader is reliable and fast.

The 2D facial recognition is slow and mostly unusable in all but good light as there is no LCD fill or IR. You can only register one face despite multiple account capability.

The Ultramintt X3 will receive an Android 10 upgrade when available. The security patch is two steps behind – most Android phones should have August by now.

Transfer from other devices

As it is pure Google Android, you need to back up your old device to Google Cloud, and it will reinstall most apps and data to the new device.

At $265 neither are deal-breakers. You could be picky and ask for an 18W fast charger in the box, but hey, that probably saves $20!

Its is vital for us to know the sensor brand and model so we can compare it to others using the same sensors – a benchmark that allows us to assess post-processing and lens quality as well.

The Sony IMX214 is an old BSI sensor from October 2014. It was popular in 2015 on premium phones like the Moto Z, HTC One M9, Huawei Mate 7 etc. Today it is a low-cost 13MP sensor and not with the latest smarts.

A ‘new’ feature at this time was HDR. That is reflected in the camera having a manual HDR setting (not auto as later sensors have). If you use this setting, it takes two images with SME-HDR using different exposure conditions and post-image processing generates an ‘optimal’ 13MP HDR image. It is not up to HDR standard of later sensors.

It is one of the first sensors to support pixel binning, where the best four pixels in four images are ‘binned’ to create a better final image. It also ‘effectively’ doubles the pixel size for low light. We assume that if you don’t use the HDR setting it automatically pixel bins.

We cannot identify the front camera sensor at present.

Mintt advertises a 52MP mode – sorry this is just rubbish. It takes the 13MP image and upscales it,  quite slowly, by creating three identical pixels around each original pixel. It does not add detail (you can’t create what is not there) and softens the image.

We have not worked out how its night mode works either. It suggests that it combines three frames at different exposures, but all we see is a little brightening at the expense of detail and contrast. But file sizes are two to three times normal so let’s leave it at that.

Summary: Given this is a new brand, the best advice I can give is to and open with specifications. But at $265 it is all about whether the camera output is merely social media standard or more.

It identifies scenes including

We found that it identified the Sky quite well, but if anything it muted the colours. We found it is best to shoot without AI.

Colours are more natural than they Mintt Y3 but still lack the punch.   – there is a little more green in the forest and blue in the sky.

Telephoto: Detail is good, but that characteristic warm colouring persists.

Good detail and the reds and colours are reasonably accurate.

The standard shot is not too bad but the colours are washed out and there are noise artifacts.

Night mode brings out the and improves details – great

8MP selfies should be outlawed. It is a basic selfie camera without flash or LCD fill.

Face detection was impossible in all but good light.

The rear camera has a 2MP depth camera for foreground/background blurring. It is OK but lacks a clear delineation where the foreground is not clearly defined.

The front 8MP camera supports bokeh but its all done post processing and is barely adequate.

Perhaps not ironically most people never use bokeh.

Better than most mass-market devices – great in day and office light using HDR. Not to bad in low light either.

It is nowhere as impressive as its brother the UltraMintt Y3 which blows me out of the water for what a $399 phone can do.

But I have to pinch myself and come back to reality – this is a $265 phone and it meets or exceeds any expectations you should have.

And looking at JB Hi-Fi for price competitors there are none with the basket of features this phone has. In fact, you would need to spend $349 to get the OPPO AX7 which is the closest match to the Mintt X3 specifications.

Features
Value for money
Performance
Ease of Use
Design
Reader Rating4 Votes
Good price-to-performance ratio
Camera is a cut above ‘social media’ grade
2-year warranty
Android 10 coming
720p display does not reach its potential - can be fixed
3GB RAM means it can chug under load
4.4