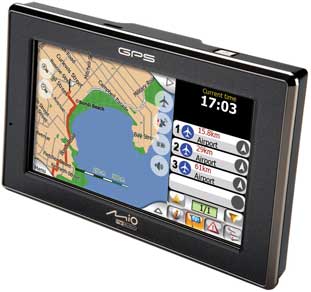 The Mio C520 is a bulky GPS unit, but that’s with a very specific purpose in mind, as it uses all of its size, along with a unique split-screen approach to presenting information, making it an easy to use navigation device.

The most striking thing about the C520 is its size, and especially the size of its display screen. Measuring in at 4.3″ (diagonal), there’s plenty of room for displaying map data, and Mio’s engineers have cleverly used this space to its full potential. The C520 uses a split-screen approach, where you can either opt for a full (and very widescreen) map display, in traditional GPS terms, or have thirty percent of the display given over to other information. This can be route information, points of interest or even an analog speedometer if you prefer.

The design of the C520 is quite minimalistic. It uses touchscreen inputs only – including for adjusting the system volume, with a headphone socket and SD/MMC card slot on the left hand side and a USB 2.0 port on the base of the unit. The supplied car mounting system includes a charger that plugs into the mount rather than the unit itself.

The C520 itself runs on the SiRFStar III chipset and supports bluetooth for mobile phones and audio playback, along with picture display, contact sorting and even a simple inbuilt calculator. From a technical perspective, it runs on the Windows CE .Net 5.0 platform, but that’s not something you’ll ever notice; the interface is just a collection of large and easily discerned buttons.

The C520 had no problems acquiring a GPS signal lock during our tests, although we did find that it had a tendency to lag on the further side of acceptable GPS practice – veering more towards being within 5-10 metres from our actual position, rather than a more comfortable 1-5 metres. The display works exceptionally well in full-screen mode, but it’s with the 70/30 split that the C520 really shines. For basic driving, the speedo is accurate enough to be well worthwhile, and the choice of trip directions or points of interest (POI) – vital if you need a service station in a hurry – is inspired stuff. Yes, other GPS units do offer POI data, but placing it away from the map allows you to easily pick your POIs without being swamped by onscreen icons in the way of the map route.

The C520 supports text-to-speech, and while the supplied voice is a touch on the robotic American side, it was still clear enough for us to actually use it, rather than mock it, as is common with many other GPS systems that offer this feature.

Our one caveat with the C520 is part and parcel of its increased size. Even with a supplied carrying case, it’s still a portly piece of paraphernalia that’ll more than fill a pants pocket when taking it out of the car.

At $699, the C520 represents excellent value for money. Its large carrying size means it’s not perhaps for the GPS enthusiast who also enjoys lengthy hikes, but otherwise it comes highly recommended.

If you missed the Gadget Guy showing this to Kochie and Mel on Channel 7’s Sunrise, click the graphic below to watch the video.