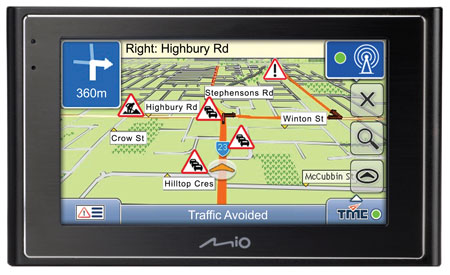 Mio’s taken the interface from older Navman models, as well as the rather regrettable fiddly screen mount, and whacked it in a unit that offers everything a premium GPS should. The result is a unit that’s amongst the best in its class.

Despite the name – and somewhat disappointingly for us – the Moov series of GPS devices doesn’t come with a free carton of chocolate milk. What the 370 – the top of the Mio’s new Moov range – does come with is an interface that’s been essentially ripped entirely from the older series of Navman GPS devices. This isn’t a cunning case of industrial espionage, however, as both Mio and Navman are owned by the same parent company, Mitac. Grabbing the older Navman interface is a pretty clever step nonetheless, as it matches ease of use with a good feature set, including Bluetooth, the latest NAVTEQ maps, TMC Traffic Channel compatibility with a lifetime SUNA subscription and 3D landmarks.

Like the recently reviewed Navman 300T, we took the Moov 370 out for a short spin. Just from Sydney to Adelaide and back – a Sunday drive with a bit of attitude, if you like. It gave us plenty of opportunity to test it in a city both with and without the benefit of traffic channel, as well as plenty of smaller country towns along the way, where mapping data is often suspect and routes can get a little strange, to say the least.

As mentioned, the liberal borrowing of the Navman interface style of old makes the Moov 370 exceptionally easy to use, even if you’re not familiar with GPS systems to speak of. GPS triangulation was swift and accurate, and map routing — including spotting traffic problems and routing around them – was very good.

There are some aspects of the Moov 370 that aren’t that great. The TMC traffic channel only works when a separate and very easily tangled antennae is attached to the windscreen. Speaking of the windscreen, the Moov 370’s weakest point is where the unit itself attaches to the windscreen mount. It’s incredibly difficult to get the USB power to the unit while putting it together, and one part of the older Navman design we wish Mio had left out of the Moov 370.

Our solution to this over the length of our trip was to leave the cigarette adaptor permanently locked into place, removing the whole unit as one piece and stowing it away. Hardly elegant, but it did work.

We like the Moov 370 a lot. It’s easy to use, reliable and comes with the kinds of features you’d expect at this price point, or even above it, making it good value. We do wish they hadn’t pinched the design for the wonky Navman car mount, though.