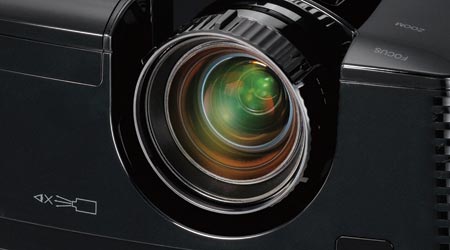 The ideal home theatre has one characteristic above all else: it is entirely dark. We can talk all we like in our reviews about the black levels achieved by a home theatre projector, but even a few lumens of ambient light can wipe out dark detail.

But if black levels are limited by ambient light, there is only one way to combat this: by moving the other end of the scale. That’s what the Mitsubishi HC3900 home theatre projector does. The company has other models that produce immaculate darkness. This one produces enormous brightness.

Based on DLP technology, Mitsubishi rates this projector at an extraordinary 3000 lumens of brightness. Most home theatre projectors offer between 1000 and 1500 lumens. Despite this, its lamp is good for a lifespan of 3000 hours.

If you are prepared to accept a little less brightness, the lamp life extends in the low (well, low-ish, for this projector) output mode to 5000 hours.

The projector uses a 0.65 inch (16.5mm) Digital Micromirror Device which offers the full high definition resolution of 1920 by 1080 pixels. DMD projectors such as this require a colour wheel to allow the three (or more) colours to be delivered in sequence. This one uses a five panel wheel (that is, it has five tinted panels which are synchronised with the movement of the mirrors on the DMD) running at double speed.

You have to install the projector fairly carefully because it does not include a lens shift feature (which allows some projectors to be offset from the screen), but it does have
a generous 1.5:1 zoom range, allowing some flexibility in the distance at which it need be placed from the projection screen.

It has inputs for all video standards including, of course, HDMI. It also has an RS-232C port for system integration, and a 12 volt trigger output.

At first, having set the projector up in my usual room, and having taken the usual precautions about light, I found the black levels somewhat less deep than the present state of the art. But the next day I discovered something else. With the twin fluorescent tubes blasting light out in my office, the picture produced by this projector remained extraordinarily clear and detailed. Normally under these conditions I have to peer very closely at the screen to make out what is happening.

Lowering my leaky room blinds and turning out the light, there was still plenty of light in the room. But the image on the projection screen was bright and clean and engaging. That’s what you get from a high output projector: the ability to see a fine picture in sub-optimal conditions.

To be fair, while the blacks in a dark room were by no means the darkest, they would have been a performance to die for only a few years ago. They still permitted plenty of dark detail to be shown on the screen.

The image was nicely configurable. As with other Mitsubishi projectors, I found it necessary to switch off ‘Overscan’ manually, but once this was done all 1080p signals were handled perfectly, without any scaling at all. Blu-ray signals delivered at 24 frames per second – the best setting – were nicely handled as well.

The projector did not include any frame interpolation motion ‘smoothing’ system, and with the extremely precise operation of the DLP technology, it tended to allow judder to be a little more apparent than LCD projectors. Sometimes the more accurate a projector, the more revealing it can be!

On occasion, there was a small touch of the rainbow effect, to which I am especially sensitive. But it wasn’t particularly troublesome.

If you want excellent blacks in an ideally darkened home theatre room, then it might be worth checking out Mitsubishi’s HC3800 projector – a bargain at under $3300 and optimised for this role. But if you find yourself needing to produce a good picture, even with a bit of light in the viewing room, the Mitsubishi HC3900 stands alone.