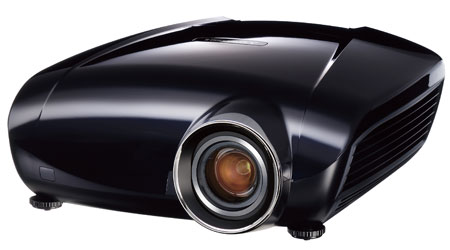 Even though the Mitsubishi HC7000 is the highest cost unit from that company’s three model line-up, it still comes in at only a little over $5000. Yet for that you receive performance that would have cost you eight times that amount five years ago.

The projector is based on LCD technology, which has come a long way in recent years. The three LCD panels offer the full high definition resolution of 1920 x 1080 pixels and quite respectable levels of black ‘natively’. However that is enhanced enormously by the use of what Mitsubishi calls its ‘Diamond Black Iris’. This is a technique for clamping down on the levels of light produced by the projector by physically blocking it, limiting it to the momentary requirements of the picture. In Mitsubishi’s system, this can operate at up to 1/60th of a second, so no matter what the format – from DVD to Blu-ray – each individual frame of the video receives the optimum amount of light for its contents. The company says that the dynamic contrast ratio of the projector is an impressive 72,000:1.

The projector also sports powered adjustments, so you can use the remote control to set the focus and the zoom (1.6x), plus apply left and right, and up and down lens shift. That allows considerable placement flexibility for the projector.

You get the usual range of analog video inputs, plus two HDMI ones. There is also an RS-232C port so installers can wire it into a control system, and a 12 volt trigger output allows the unit to fire up an automatic projection screen to be automatically deployed.

Once this was done, I was able to enjoy a massive 100 inch picture of extremely high quality. I used the default reduced power mode which more than doubles the lamp life and found that it produced plenty of brightness in my room, while also delivering strong blacks. The default colour settings were pretty good, although I made some small improvements with a little tweaking of the colour settings using a calibration disc.

One of the major problems with large display screens is that any instability in fine detail, or artefacts generated by poor quality video processing, is extremely obvious. But this projector uses the Reon-VX processor to do all progressive scan conversion and scaling. This is one of the best video processors in the business, so even in automatic mode the results were very nearly perfect. There are ‘mode’ settings also available (‘Film’ and ‘Video’) that can be used to override the automatic processing should even this prove unequal to the task. Even the most troublesome DVDs, fed to the projector in native 576i format via HDMI, were rendered absolutely perfectly when ‘Film’ was selected.

So I just set my Blu-ray player to output the ‘Native’ video format, whether 576i from PAL DVDs or 1080i or 1080p from Blu-ray discs. And the results were as good as it’s possible to get.

Perhaps the only significant omission from this projector is that it does not incorporate any form of motion smoothing, judder reducing technology that generates intermediate frames between the real ones.

But if you’re primarily interested in seeing a faithful rendition of whatever source you are feeding your display, this projector comes closer to that faithfulness than most.