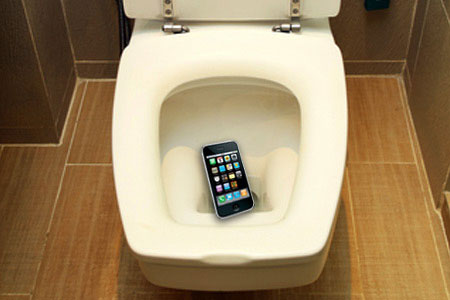 Mobiles at risk as smartphones land in the toilet

If you’ve ever dropped your phone in the toilet, you’re not alone, with research finding a good 41 percent of Aussies have done it. Here’s hoping they didn’t flush.

It’s 2015, and mobiles and tablets are so ubiquitous that it’s not unusual to hear of people who take them on the john with them, allowing them to do their business while they, erm, do their business, so to speak.

But texting where you do that may not be the best of ideas as a new survey of Aussies has revealed that while 70 percent of Aussies have dropped a phone or two in water, almost half of these people dropped them in the toilet.

That’s coming from a small survey of Australians in the past couple of months, with the findings revealing that of the 41 percent that managed to drop their phones in the loo, 70 percent did it “after they had finished up”.

Their words on that one, with just as many people saying the experience of dropping a phone in the toilet was gross, and that amazingly almost half of respondents kept in using the phone after they dropped it.

Beyond the statements of “eww”, “ick”, and “gross”, you’ll find the most popular activities for people dropping their phones apparently come from texting, social networking, listening to music, and taking a good ol’ fashioned albeit semi-naked selfie, as you do, and that the majority of people who drop their phones in the dunny appear to be men.

We shouldn’t have to tell you that there’s obviously a pretty sizeable water risk if you drop your phone in the toilet, but hygiene is another big part, and while you can wipe off most phones, there is a possibility (and closer to a strong likelihood) that bacteria will remain, unless you can wash off the phone, and few smartphones offer that functionality.

Fortunately, cases may be to the rescue on this one, with the various waterproof and sealed smartphone cases at least offering the water resistance to ward off the liquid in the bowl, while the water tight case also means that you could probably clean the case off, or just completely remove the original phone from the case and throw the now toilet-soaked case away.

“In the online survey, we noticed that water-damage seemed to be the biggest risk in dropping your phone in the loo, but there is also a risk of shock-damage from toilet bowls,” said LifeProof’s Patrick Waller.

“Hygiene could certainly be something to worry about and our cases are used in the healthcare industry as a hygienic solution to easily disinfect devices when needed.”

If it were us and we had dropped the phone in the loo, we’d probably just throw the case out, but with water-resistant case pricing starting from a good $90 or so, that could be an expensive loo drop. Then again, it could always be worse.