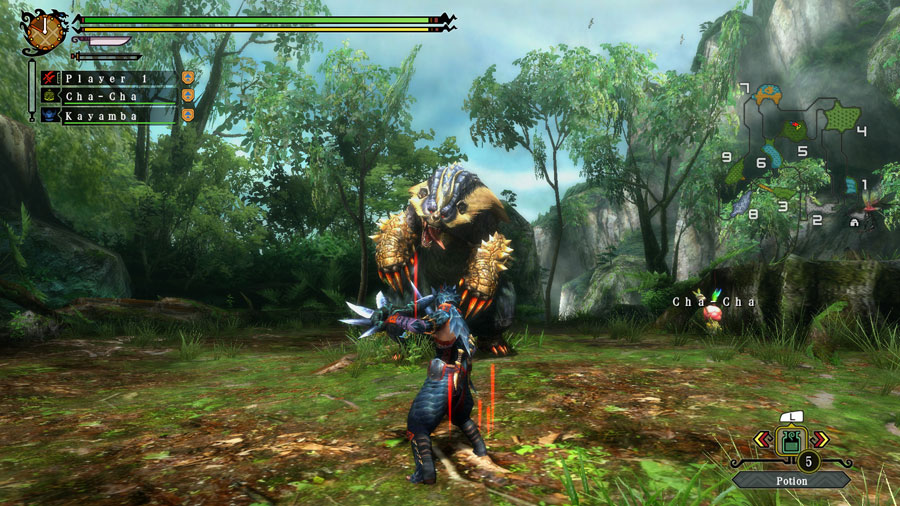 Monster Hunter 3 Ultimate is the enhanced version of “Monster Hunter Tri,” a title which saw release on Nintendo Wii in 2010, and received critical acclaim for its harsh but rewarding gameplay, addition of underwater hunting, and streamlining of the series which began in 2004.

The newest title in the franchise, Ultimate begins from where Tri started off, though with much more wind in its sails.

Thanks to the new gaming platform of the Wii U, Monster Hunter 3 Ultimate features improved graphics from its predecessors, full online and local multiplayer with voice chat built into the gamepad, and the new feature of importing your save between version of the game on other platforms, such as Nintendo’s 3DS. This makes it possible to continue hunting with your character on the go, providing youʼve recently trimmed your money tree and will buy both versions.

Capcom has taken almost all of the unique gear sets, weapons, and monsters of the past Monster Hunter games and thrown them into Ultimate. In addition there is even more new content on top of that, resulting in thousands of new gear customizations, and several dozens of new monsters to hunt.

And then there are the quests, with over 200 brand new quests and three new areas to go stabbing in, resulting in so much content that youʼll be hunting digital monsters for months on end, which is precisely what this title is: a time sink, and a fun one at that.

You start off in Moga Village, which had been a prosperous trading town until there was a terrible earthquake, believed to have been caused by a new resident underwater monster.

Wet behind the ears, you volunteer to train up with the hunting guild to eventually carve said monster a new one, thus stabilising the town, revitalising trade, and as an added bonus, wearing it as a fancy hat. Because you can.

This is were the fun starts, albeit slowly at first. You see Monster Hunter for newcomers doesn’t quite click in until several hunts into the game. Many will find the combat animations slow to get used to as well as a steep learning curve. Donʼt let that throw you off though, as the sense of satisfaction after downing a building sized dinosaur-like creature is immense.

Battling one of these beasts is all about timing your attacks, dodges, knowing your surroundings, and most importantly, when to use a item.

Whenever you drink a potion or eat some freshly barbecued meat, the hero flexes his muscles for all of creation to marvel at his moxie. Many people might find that irritating and think their hunter has delusions of grandeur – and after the 50th time, you’ll certainly tired of it – but itʼs also a lighthearted way to not only keep you on your toes, but also to stop you abusing your bag of handy mega life fuelling drinks.

Monster Hunter 3 Ultimate also employs a robust animation system, so when the boss is low on health, instead of seeing their health bar flash, theyʼll start limping and even drooling. This makes the most important part not only knowing your weapon and positioning, but watching your prey. This lets you know when you have a moment to cut its tail off, or set up a pitfall trap and tranquilize it into submission, gaining you a nice new pair of dino-bunny slippers to go with that hat you acquired earlier on.

The environments in this title are small, but have a lot of attention to detail put into them and look quite nice, despite being a port. There are some textures that havenʼt been recreated in HD like the rest, though, and they really stand out, and not to the title’s benefit. Some areas even cause the game to stutter visually, which is especially noticeable while in combat.

Monster Hunter’s world is also filled with little random things that will keep a smile on your face, even after countless hours of hunting. Examples include a gourmet chef cat looking for the purr-fect ingredients and cooking meals to power you up for your next hunt. Thereʼs even a little pixie creature named Cha-Cha who helps you hunt, but only if you agree to be his sidekick.

Speaking of sidekicks, hunting online is vastly more fun then taking everything on solo. Going up against these creatures in four man teams – or eight if everyone decides to take their Cha-Cha along – creates a very intense and fun multiplayer atmosphere.

The online system, however, is similar to Tri in that itʼs a bit rough around the edges and on occasion you will get disconnected from the Capcom servers during a hunt. Luckily though, it hasnʼt happened enough to cause major annoyance. The addition of a second Cha-Cha in this title means that if you donʼt feel like playing online, you can complete all the quests offline, which is very welcome indeed.

Despite these minor issues, it is an incredibly rewarding experience, especially if youʼre willing to put in the hours.

The sheer amount of content will ensure that it will give you many hours of enjoyment, and being able to continue your hunt with the 3DS save swap is a great addition for the hunter on the go. Ultimately, itʼs the best entry point into the Monster Hunter series for beginners and veterans alike.