Monsters VS Aliens: The Video Game 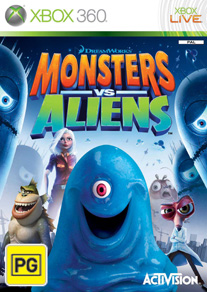 There are two things to say about the Monsters VS Aliens game right away: the first is that, while it’s obviously based on the DreamWorks movie of the same name, it doesn’t rigidly follow the plot of the film, so playing the game won’t spoil anything for you. The second is that, after playing a heap of titles this month that, frankly, move beyond being fun entertainment experiences and actually become quite stressful to get through, it’s been a real pleasure playing this game.

The 12 levels, seeing the player swapping control between The Missing Link, B.O.B. and Ginormica, are fun to play and suitably bite-sized, assuming that the primary audience for the game is kids. There isn’t much variation in what you get to do – each mission is built around using the respective monster’s specific powers or skill-set – but the execution is very good, with solid graphics, some funny voiceovers and, as you’d both want and expect from this kind of licensed fare, there’s a real feeling of controlling the characters you just saw in the film.

The difficulty level is pitched squarely at the younger market, including quick restarts and very forgiving timeframes for button presses, which shouldn’t be a surprise to anyone and is perfectly fitting, so while adults might get a brief kick out of it all (B.O.B.s abilities being the most original and challenging), this is definitely one for the nippers. And unlike many of its licensed brethren, where smaller developers are often recruited by the big movie studios to knock out a game with very little quality oversight involved and impossible deadlines, Monsters VS Aliens emerges from developer Beenox in very good shape. The narrative from Dr Cockroach (the character voiced by Hugh Laurie of ‘House’ fame in the movie but not, sadly, in this game) is genuinely funny in places, and helpful in terms of nudging you towards the level’s solutions and there’s a bunch of new interstitial scenes that make you smile.

There are a few problems, beyond the formulaic action. There’s no online play and only 2-player co-op, which isn’t even fully-realised, because while the second player controls Dr Cockroach, you don’t actually get to see him on screen. This is disappointing, by any standards, and not what you’d expect when you read the publisher’s description of it being ‘unique’. Being uniquely sub-par isn’t much to shout about, although it’s easy to see why the developer thought it’d be a neat way to circumvent spending the extra processing power on split-screen or even single-screen multiplayer.

But it’s fun – a word that’s becoming increasingly difficult to apply to many of the more ‘mature’ videogames being released these days – and there are some very neat extras to unlock as you progress, which are then presented back to you more like a DVD movie than a game. Monsters VS Aliens is the perfect pickup for your youngsters.