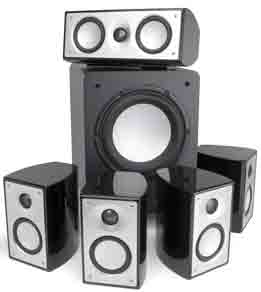 Mordaunt-Short is another famous English brand, and in a sense its ‘Alumni’ system is more traditional than some of the others in this space. At least when viewed from the front, because they appear rectangular. Nonetheless the satellite and centre channel speakers curve towards a narrower rear, and they are finished in an attractive piano gloss black.

The satellites each employ a full-sized 25mm aluminium dome tweeter and a 90mm CPC bass/midrange driver. This is a design – employed by Mordaunt-Short throughout its range – that eliminates the usual dust cap in the centre of cone, providing a smoothly curved surface from which to drive the air.

The centre channel is similar, but a touch longer in its sideways orientation in order to fit two of the 90mm drivers. This one comes with a cradle to hold it on a shelf (it’s shape would let it rock to and fro otherwise). All five speakers have wall-mounting points at the rear, but do not come with mounting brackets.

The subwoofer is a relatively conventional unit also. Bass-reflex loaded with a downwards-firing port, it is in a non-descript box. Still, lack of style in a subwoofer is not very important. Just hide it in a corner where it isn’t immediately obvious. The 200mm driver has a 120 watt amplifier to drive it.

This is a much lower priced system than some of the others, and this was apparent primarily in one area: the system simply would not go as loud as some of the others. In part this was due to lower sensitivity of the satellites, and lesser power handling. I had 140 watts available to each channel, but there was no way these speakers were going to handle anywhere near this. At the more extreme levels they simply became stressed.

But below that, they managed to produce quite convincing levels on surround sound and stereo both, and the sound was clean and very engaging. Most impressive was the subwoofer, which offered reasonable bass extension and quite high volume levels.