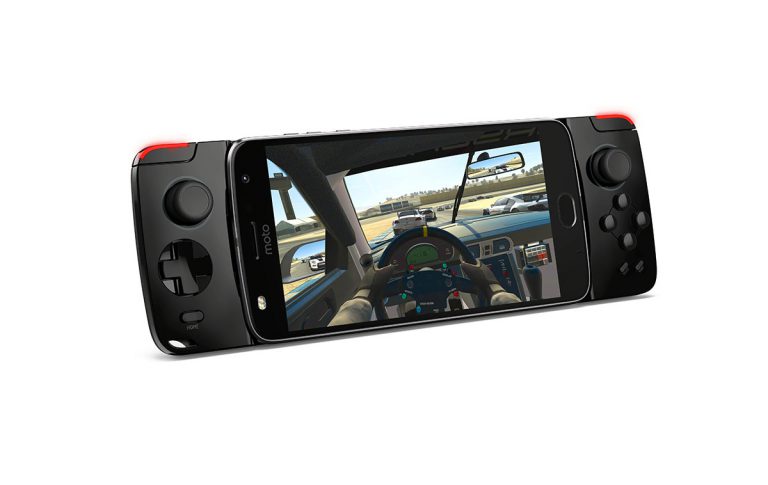 Motorola has released two new accessories – Mods, they are called, for “Modular” – for its Moto Z range of phones, expanding the range that was introduced last year. The GamePad Mod and the 360 Camera Mod take advantage of the Z platform, allowing the phone to go way beyond what one can normally do with a phone.

We’ve been around for a while and consequently have seen “modular solutions” come and go. The modularity concept is like a siren enticing device makers into what typically ends up being a dead end.

But it seems to be such a great idea. Surely by having bits that attach to a core device, the device can be tailored to individual needs, without the costs of a bunch of features the user doesn’t need. But success in this endeavour is rare.

The second most recent major foray into this style of thinking was last year, when LG introduced its G5 model (our review here). All the first class core features were built in. But you could drag out the bottom and slot in a replacement battery, or one of several modular accessories, including a fancier camera, a 360 camera and a higher quality audio system.

The success of this approach can be judged by the fact that with the replacement model, the LG G6, LG abandoned the whole modular thing.

But there are marked differences with the Moto Z-style mods. As we found out when reviewing the Moto Z last year, if you’re going modular, you’d be hard put to find a way to do it better that Motorola has. For two reasons.

First, the Mods are super easy to attach. They just snap on, held in place magnetically (yet securely). Contacts on the camera body and the mods align without any user action, so there’s no plugging in or out. Just snap it on.

Second, the Mods are useful. There’s a JBL speaker that transforms the sound, a projector so you can do presentations direct from the phone, and a Hasselblad 10x optical zoom camera for much, much higher quality photography. We ran these mods through their paces here.

The new mods also look like they’ll be very useful.

Especially the GamePad Mod. If touch screens were the most efficient way to play games that require any element of navigation, PlayStations and Xboxes would come with touch screens. No. Joy sticks and buttons are the way to go. And they are what the GamePad Mod offers.

With this, the phone just as much snaps into the GamePad as the Mod snaps onto the phone. It is 226mm wide, with the usual gaming buttons and joysticks on both sides. Because it connects via the standard Moto Mod connector, there’s no plugging in required, nor any latency due to things like Bluetooth connections.

It has its own 1305mAh battery built in, so it doesn’t run down your phone either – although the game might. Motorola says that the battery will provide up to nine hours of play. It has its own audio connector too, something Motorola describes as “3.5mmHSJ” which, as far as my Google-Fu skills allowed, would seem to be something unique to Motorola. But I’m guessing it’s just a standard four connector 3.5mm jack for combining headphones with microphone.

The Moto GamePad Mod is available now for $139.

The name pretty much says it all. This is a snap-on phone back with a twin lens 360 camera poking out the end.