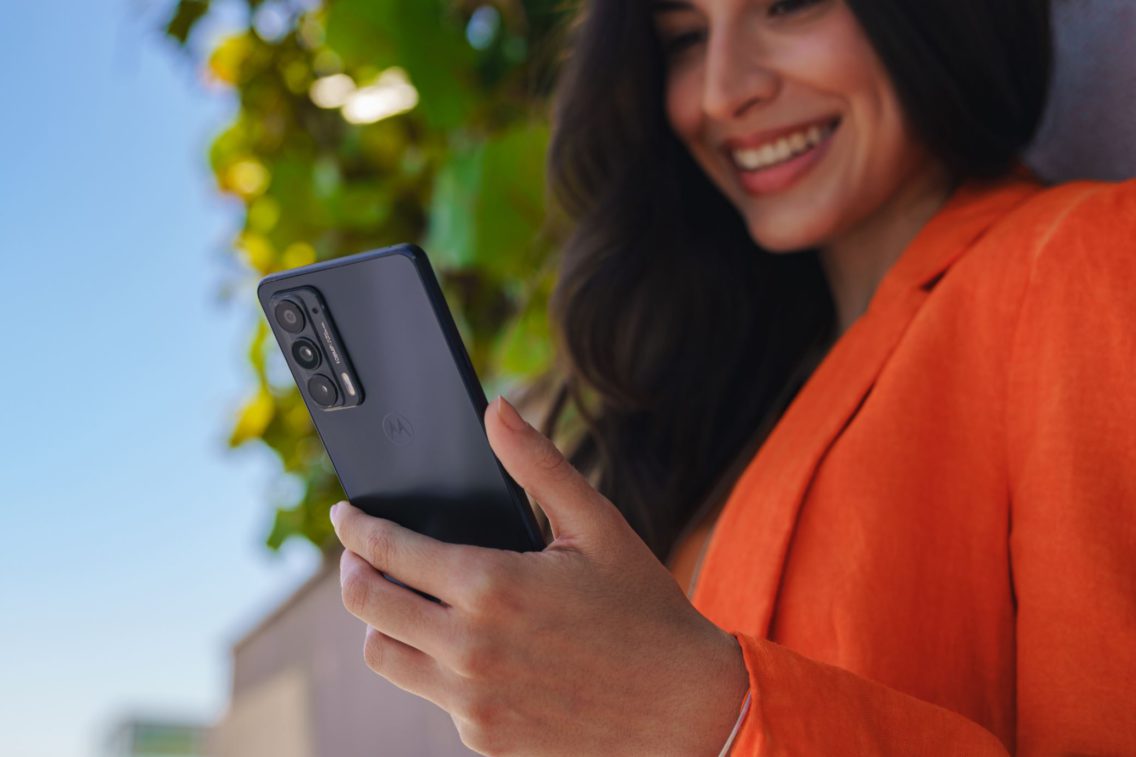 The Motorola Edge 20 is the middle child in its premium Edge 20 range. As number two, it has to try harder, and it gives Motorola a phone that, at $699, is the just-right Edge.

Interestingly we have all three Motorola Edge 20 models for review, as well as the new Moto g50. All Edge’s have a similar look and feel, 6.7” screens and 30W Turbo Charge batteries in a good, better, best scenario – stay tuned.

Where the $200 dearer Pro model gets a 100% DCI-P3, Gorilla Glass 5 screen, faster processor, more ram and storage, USB-C 3.1 and slightly more battery life – frankly, this is better value with just as good a pedigree.

Get ‘ready for’ Motorola Edge 20

Motorola has added ‘ready for’, an Android desktop experience on an external PC. We have a full review and user guide that you should read as each Edge supports different Ready For features and connectivity (The Edge 20 Pro does everything).

Interestingly when I was unpacking up the Motorola Edge 20 to fit the Boost sim, thus removing the TPU bumper cover, I discovered an entirely different build style. While the Pro has nice rounded edges and a PMMA acrylic glass back, this has very squared edges, a flat PMMA back, is a full 1mm thinner and a lot lighter.

Put the TPU cover back on – you won’t know the difference. So for this review, we will point out any subtle differences (usually in brackets) that may make you buy the Pro at $200 more.

As far as we can ascertain, the Motorola Edge 20 Pro and Edge 20 screens are the same, except for lower-cost Gorilla Glass 3 on the latter. Tests show insignificant screen colour or gamut differences.

The 144Hz refresh is more a gimmick as there are so few little apps that it supports. Overall the screen is a strong point with great colours and brightness.

The Edge 20 Pro comes with the Qualcomm SD870, but the Edge 20 uses the newer SD778G that has a lot going for it. Naturally, it is not as fast (about 30% slower), but it has 6th Gen AI and supports Wi-Fi 6E (2400Mbps). It is a good processor with loads of power and better power management for longer battery life – suitable for the task.

Motorola has not shaved too many dollars by departing far from the Qualcomm spec. It has saved money in the processor, less/slower ram, and back to USB-C 2.0 that does not support ALT DP (Display Port), affecting some ‘Ready for’ connectivity.

Comms – 2400Mbps with the rigth router

Apart from USB-C 2.0 (that all phones have in this price bracket), it is nice to see 2400Mbps Wi-Fi data transfer rates, BT 5.2 and a dual-band GPS. You normally spend more to get that!

A very impressive speed and antenna result. The only disappointment is that it does not have n40 for Optus low-band 5G Low-band repurposes 3G and eventually 4G bands to give wider 5G coverage at the lower 4G speeds.

While it comes with a QC 3.0, the  SoC is  QC 4.0+ compatible. That means it can use any USB-C PD charger, and we suspect it will charge even faster. Overall very similar results to the Edge 20 Pro – the 6nm SD778G SoC is more power-efficient and compensates for the slightly smaller battery.

Many competitors have stereo micro-speakers, but invariably users listen to music over headphones.

IP52 means so little that it is hardly worth quoting. If water resistance is important, then you need to look at at least IP67.

It offers a reasonably competitive upgrade/update policy, and MY UX adds considerable value to stock Android.

Missing – in comparison to some competitive handsets

It is similar to the Motorola Edge 20 Pro. The only differences are the 8MP Periscope becomes an 8MP 3X Telephoto (same sensor), it has later 6th Generation AI (5th) and less processing power and RAM. In other words, apart from 50X periscope zoom, we should not see much of a difference.

I like this camera setup because it has a massive 108MP primary sensor (bins to 12MP), an 8MP Telephoto 3X zoom and a 16MP Ultra-wide. We also managed to find the sensor models used, giving us some confidence in the setup.

On the plus side, Motorola’s move to MY UX from pure Android has allowed it to focus on adding more depth and features to the camera app – it shows. Where Motorola traditionally took ‘capable’ shots, it is now up there with the best – its camera app and AI expertise can only get better.

On the negative side, no optical image stabilisation (OIS) on the primary 108MP camera makes shooting at that level difficult without a tripod. It also is a true image – no AI. But after binning after 12MP binning it has lashings of AI.

Camera summary – it is up there!

The 32MP bins to 8MP and produces a nice colourful shot. There are a lot of effects which you can play with.

You can shoot up to 4K@30fps, with EIS. It uses a sensor crop rather than trying to process 108MP. 1080p@60/30fps is what you will mainly use. Great daylight, office light and even low light performance and the three mics make a real difference in the audio track.

The Qualcomm SD778G is a reasonably new SoC. At present, no other Australian phone uses the SD778G SoC or has a 108MP camera so, competition tends to be on price. As such, it is the outright mid-range winner

And that begs the question – do you need to spend $200 more for the Pro?

If I used the USB-C 3.1 for ‘ready for’ and wanted more RAM/Storage. The Periscope camera is not that much better than the Telephoto. But in practice, these are so close that the Edge 20 and its $200 saving makes it my pick.

From September 2021, we have adjusted our ratings to give us more ‘headroom’ to recognise exceptional features and performance. Until now, 8/10 was considered a ‘pass’. It is now 6/10. If you compare the Edge 20 Pro with older smartphone reviews, reduce them by two points.

The Motorola Edge 20 starts at a pass mark. Add the partial (no USB-C cable) implementation of ‘ready for’, its two Android version upgrades, a great (although not perfect) camera, solid battery life, excellent phone reception and support from Motorola Australia, and it is more than a match. It is only the IP52 rating that disappoints. If you have $699 to spend, there is no competition. It gets the tick.