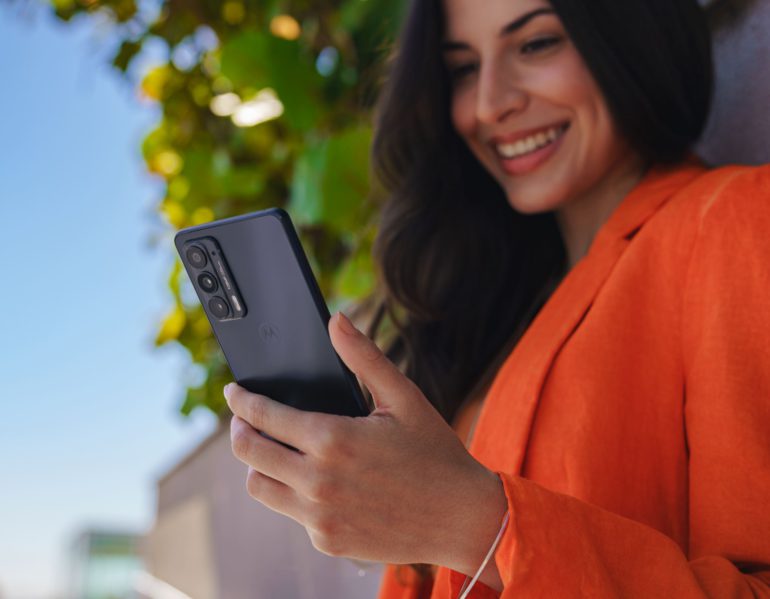 Motorola is on a mission to become the #3 smartphone supplier globally. Whether or not it gets there this year or the next less important – that it will is what matters. It is time to channel Charles Atlas and kick sand in the bullies face to show the world it is not a 97-pound weakling.

Motorola would never admit to being a weakling, but its fortunes went from excellent to worse after Google’s purchase of the American icon in 2012. After pillaging the company for its patents and know-how, Google sold what was left of the company – essentially a brand – to Lenovo in late 2014 for a quarter of what it paid.

It went from the highest selling ‘smart’ phone of all time, the iconic Razr, and was one of the earliest companies to adopt Android to offer 4G phones and shatter-proof screens.

Moto got its mojo back

In late 2019 we (GadgetGuy) started to see a change at Motorola. We even reported on How Moto got its mojo back as we began to see how it and Lenovo were meshing together. The new Razr Flip V1, Edge V1 and its e-and-g-series were becomming competitive again with the Chinese mass-market phones that had taken much of its market share.

We had a chat with Kurt Bonnici, recently appointed Head of Motorola for Australia and New Zealand. Kurt has been with Motorola since 2017, and before that with Nokia and Microsoft. He knows the market very well.

GG: What are the most significant changes you’ve seen in the Australian market in the past five years?

KB: Work-from-home meant that people came to rely on their phones a lot more than just making a call or send a text. They needed 24×7 reliability, decent hands-free and Duo video calling, data downloads, video and audio content consumption, macro photos of receipts, and battery life was paramount. The phone stepped up a notch from a consumer device to a business device. Our g-series hit the spot.

And there was a massive move from combo Telco phones on a plan to retailer outright purchase or Buy Now Pay Later. We also saw them shopping around Telco MVNO’s (network resellers) for better deals and more data. It did not hurt that many were able to tax write-off their phone either.

And 5G came of age a few months ago where the majority of $300+ phones are now 5G and sold at similar prices to 4G. Just because you buy a 5G handset, you don’t have to pay for a more expensive 5G plan, but it offers some future proofing.

On the disturbing side, the grey and parallel import market flourished. Buying Australian certified models that work on Telstra, Optus and Vodafone networks is now more critical than ever with a 5G handset.

GG: It was terrific yet unexpected to see Motorola rate so well after years of quality but not class-leading phones. How did it come from nowhere to blitz our 2021 phone ratings?

KB: The phones you refer to are the three Edge 20-series (20 Pro, 20, and 20 Fusion), Moto g50 and two Moto e7 variants. It is fair to say that they are 100% from the new Motorola and reflect our focus on listening to what the customer wants.

Our studies, mainly in the USA, show that four elements are critical to purchase – battery life, performance, display and camera.

Of course, you have to have a well-priced, nice-looking, well-made phone. Brand credibility is also important where it can override price considerations. People will pay a little more for a well-known and respected brand. We have focused our new g-series on being class-leading at every price point. Our Edge 20 series is a class leader in the upper-mid tier.

GG: Motorola is on record stating that it wants to be the #3 smartphone supplier in Australia. How is it going to achieve that?

KB: Perhaps the most significant is that we are finally part of ‘One Lenovo’ and can now leverage its impressive strengths in PC, Gaming and Android tablets. In Q2, 2021, it was:

But more importantly is the strategy that focuses on integrating Lenovo’s whole business to create synergies in the way the company develops solutions and goes to market. For example, Lenovo can now offer smartphones as part of its enterprise solutions. The development of ‘Ready For’ (Motorola’s Android Desktop) and ThinkShield (device management and protection) could not have happened without Lenovo’s resources.

Motorola can rely on Lenovo’s worldwide supply scale, and we are getting the components we need to make great smartphones.

Motorola has had some significant wins this year, too:

In part, it is our existing relationships with retailers and telcos stocking our products. In part, increased demand is driven by the reality that our 2021 phones are different, exciting, and an easy sell. Now, we need consumers to ask to see our phones instead of being offered another brand first up. We see Motorola as a rejuvenated brand with a terrific heritage.

GG: Those figures are impressive, but for every winner, there must be a loser. Your 2020 single figure market share has skyrocketed in COVID times.

KB: You mean what companies are losing sales to Motorola?

In North America, we have picked up much of LG’s share after it left the market. We are certainly picking up Nokia and Sony market share (if it continues to exist). This market rightly sees us as a US brand with a global company behind it. Latin America is a standout for us – everyone wants a Moto phone. In Australia, our Edge 20 series from $499-$899 are filling a mid-tier niche that Samsung had with its A-series. Our g-series offer OPPO, realme, and vivo buyers an alternative. The two-year warranty, excellent specifications and Motorola brand are real strengths here. And our e-series is the essential phone that does not sacrifice much to the price.

GG: Any hints at what we may see in the near future?

KB: I could tell you, but I would have to kill you. Seriously our Motorola 312 Labs in Chicago is charged with exploring the unknown. With Meta and the Metaverse, how will smartphones play their part? Will wearables replace the glass slab? What about second screen options – buy the ‘box’ and select from a range of wireless screens. And of course, what about Star Trek communicators and phasers?

GG: So, back to Glass Slab – what do consumers want?

GadgetGuy covered this to an extent in Motorola – Legends are made moving forward. Dan Dery, Motorola Vice President Global Products, said it was two things:

KB: The ‘My UX’ user interface is a light touch over Google Android, but we can implement more features. For example, Moto Action gestures like Quick Capture, Fast Flashlight, One-button Nav, Three-finger screenshot etc., are just the start.  We are focusing on what is next by reimagining everything, testing and then commercialising it.

We need to take the My UX to the next level with more voice and gesture integration (no, we won’t invent a Moto voice Assistant), and we need to do it in ways that are unique to our markets. In Australia, it could be more about bushfires and storm warnings and in the US about tornadoes and hurricanes. Then there are location-specific issues to address and particularly the work from home phenomenon. At present most UI’s are developed in China with little regional customisation.

And we are beefing up our local service, offering a hot-line triage service and even courier pick up and delivery (most models) to ease consumer pain points. Motorola has one of the lowest failure rates, and if something goes wrong, we want to help you fix it quickly. We offer:

KB: If you know Motorola from the good old days, we ask you to come back. The new Motorola has amazing products built on that legacy. If you don’t’ know Motorola, you owe it to yourself to ask to see it in the store when you buy a phone. Satisfy yourself that it can do what you want at a price you want to pay. Is it what you want? Oh, and we have some new Moto g-series coming soon that address a high portion of customer pain points.