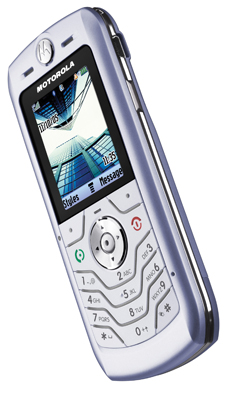 It seems these days that almost one in three people are using Motorola’s iconic Razr clamshell. Thin is the new black, and everybody wants a piece of it. The Motorola L6 continues in the tradition of the Razr, but this time it’s ditched the clamshell and decided to go for a candybar-style phone. The L6 is perfect for those who want a decent phone without the excessive size of a fully featured techno brick or price-tag to match.

Let’s start off by saying that this phone is tiny. It weighs only 86 grams, but still feels very comfortable to use and, despite its plastic keypad, has a quality feel to it. Construction is solid and the phone is encased in silver metal, with the keypad sitting flush with the rest of the phone. Thanks to its small size, it’ll fit in any pocket, even those in tight jeans.

There’s a nicely sized screen that can display up to 65 000 colours, but it uses an older technology that makes it not quite as sharp as newer phones.

There’s a built-in MP3 player, but this is a strange inclusion considering memory is limited to around 10MB, with no scope for expansion. That’s not enough to fit even three songs on it, let alone an album or playlist.

The L6 is also one of the few phones in this price bracket that supports Bluetooth. You can connect it to a wireless headset, a Bluetooth car kit, or use it to beam pictures to other phones or a computer.

Inside the box you’ll find a wired handsfree cable and a USB cable that allows you to connect the phone to your computer to transfer files. Best of all, you can charge the phone from any computer with this cable so you don’t need to lug the mains charger around.

One of the compromises made with the ultra-flat keypad is that it’s much harder to type on. Since the buttons are all at the same level, you don?t have the tactile feeling most phones give you. If you’re a heavy texter the keypad is a deal breaker.

Motorola’s menu software is disappointing. Given that it’s a relatively simple phone, the software is a bit slow, especially when loading pictures or going through the menus quickly.

The camera is also nothing to get excited over. Maximum resolution is only is 640 x 480 pixels and picture quality is very poor; the edges of images reproduced blurry and colours were muted. The quality of the screen did nothing to enhance the appearance of images either. Menus appear fine, but you’ll be disappointed when looking at pictures and videos you’ve recorded from the camera.

It’s not all bad news, though. We were impressed with the battery life, which was good for more than three days of heavy usage with approximately five hours of calls over those days. Call quality was great and we had no problems with reception during our trial.

The Motorola L6 is a classic case of you get what you pay for. As a basic phone that can make phone calls, send text and take the occasional photo the L6 wont really let you down, but if you SMS regularly or are someone who demands a little more from their phone the L6 falls short. Its biggest draw cards are its small size and stylish appearance. Fortunately for Motorola that’s likely to be enough for most people.