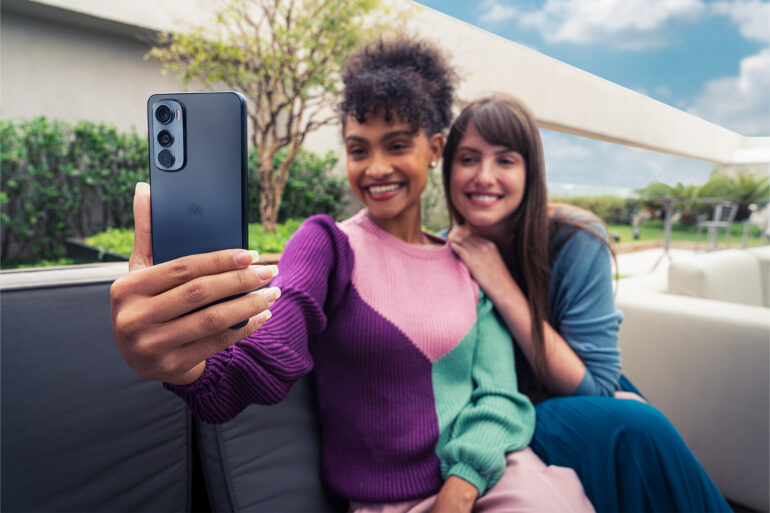 Starting with the Motorola Edge 30, a 5G smartphone measuring just 6.79 millimetres thick, it looks like a pretty decent multimedia machine for the $699 asking price. Featuring a 6.5-inch 2400 x 1080 OLED display with a 144Hz refresh rate, the Motorola Edge 30 also sports multi-dimensional Dolby Atmos audio, which should make for a decent media-viewing experience. It runs on the Snapdragon 778G+ 5G processor, includes 8GB of RAM, and as much as 128GB in storage, plus up to 32 hours of battery life, Motorola claims.

For the mobile photographers, a main 50MP camera occupies the back alongside a 50MP Ultrawide + Macro Vision sensor and a 2MP depth sensor. The Ultrawide + Macro Vision sensor enables wide-angle photos during the day while providing greater brightness and sharpness in low light situations, and can snap photos of subjects as close as 2.5cm from the lens. The Motorola Edge 30 also has a 32MP selfie camera which, aside from the standard blemish filters most modern phones include, can record simultaneously with the rear cameras using Dual Capture mode to capture two angles at once. Available from major retailers now – and a Vodafone launch from 14 June – the Motorola Edge 30 comes in Meteor Grey.

You’ll have to wait slightly longer for the Moto g82 5G, which reaches retailers in June. The middle option of the three phones features a 6.6-inch 2400 x 1800 AMOLED display at a decent 120Hz refresh rate. It also gets the Dolby Atmos audio treatment and continues with Motorola’s sleek design that nearly does away with the bezel entirely. This model runs on the Snapdragon 695 5G chip, has 6GB of RAM, and houses a sizable 5000mAh battery, larger than the one found in the Edge 30.

Also available now is the latest budget smartphone from Motorola, the Moto e32. At just $229, it has a 6.5-inch 1600 x 720 ultrawide 20:9 display with a 90Hz refresh rate. Its rear camera array includes a 16MP main, 2MP macro, and 2MP depth sensor respectively, while an 8MP camera occupies the front. Instead of the Snapdragon architecture favoured by its counterparts, the e32 uses a UNISOC T606 chip, with 4GB of RAM. It does have a 5000mAh battery, though, which should yield a decent amount of juice between charges. Bear in mind you’ll need to spend a bit more for 5G access, as the Moto e32 only supports up to 4G connectivity.

All in all, there’s a decent bit of variety from Motorola here, all of which appear reasonably priced for what each smartphone offers. From high-end users to those who don’t need much from a smartphone, most people will find what they’re looking for here. I’d love to see the Motorola Edge 30’s Dual Capture mode in action – it seems like a pretty nifty feature in a sub-$700 phone.