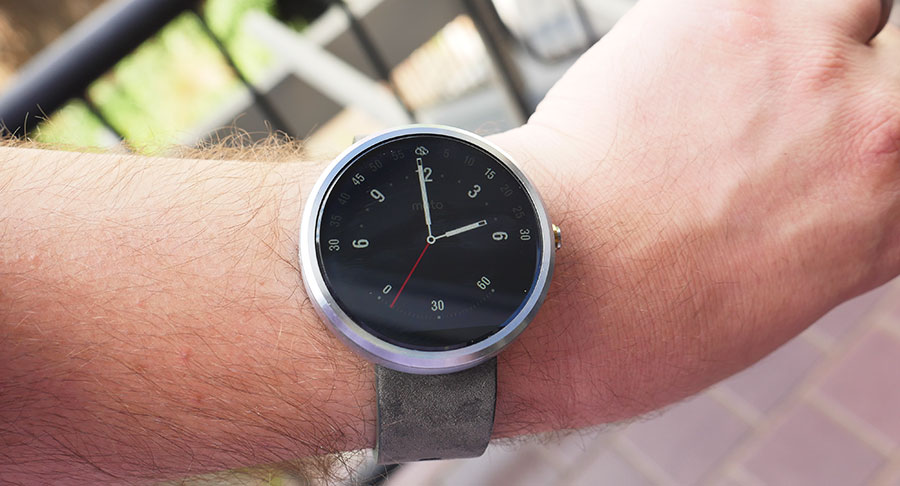 We’ve seen a few smartwatches this year, but the first one that grabbed our attention when they were announced was Motorola’s 360. Now we’ve seen and played with one, and can tell you if it’s worth owning and strapping to your wrist.

The third smartwatch for the GadgetGuy team to check out this year, the Motorola 360 was the first gadget of this type to really grab our attention, first catching wind of it earlier in the year when Android Wear was first announced, as Motorola showed that it was the first company with a circular screen in a smartwatch.

Fast forward half a year and Google and Motorola are ready to release the watch in Australia, coming to store shelves with a suggested retail tag of $329 with a leather strap.

Ignoring the strap for a moment, you’ll find a metal-encased smartwatch with a 1.56 inch circular LCD covered with Corning’s scratch-resistant Gorilla Glass 3, showing the resolution of 320×290, an amount which doesn’t lend itself to a perfect circle due to a section of the screen being cut off thanks to a lighting sensor strip being found at the bottom of this face.

Under the hood of this watch isn’t the Qualcomm chips like we’ve seen in other watches, but rather a Texas Instruments (TI) OMAP 3 chip, an older processor paired with 512MB RAM and 4GB internal storage.

Google’s Android Wear is run as the operating system, and you’ll find a pedometer and a heart-rate monitor (green light) found in the product as its sensors, while connections are handled by Bluetooth 4.0 Low Energy (LE).

Microphones are also found on the watch, as is a small vibrating haptic motor and a button where the watch crown would normally be.

The watch measures a thickness of 11.5mm and weighs 49 grams with the leather band.

Motorola has made the 360 IP67 certified, making it dust-proof and protected against water immersion up to a metre and for as long as 30 minutes.

The battery on the Moto 360 is rated at 320mAh, with the whole unit able to be charged using a wireless charging dock.

Motorola’s 360 is actually the third Android Wear-based smartwatch we’ve seen, and by now, we’re familiar with the fact that these smartwatches are basically second screens for your smartphone.

You’ll need an Android phone to take advantage of the concept — sorry, no iOS or Windows Phone device can latch on — and with the Android Wear software working with the Android Wear smartwatch, you’ll find messaging, phone call alerts, emails, and other notifications sent to the phone, with music controls working here, also.

And just like what we’ve seen in the other Android Wear products thus far, these all work as expected, with the text and image appearing on the screen when they come into the phone, with a swipe to the right taking the message off the screen.

In fact there’s very little you can do to change what Google’s Android Wear is doing, and that’s one of the requirements Google has for manufacturers using its smartwatch software.

But Motorola hasn’t made the Moto 360 into another “me too” product where it just releases the same hardware as LG and everyone else, but with a Motorola design.

What it has done is come up with some extra software to make the watch a little more useful than just a second screen.

The software in question is called “Motorola Connect” and offers up a way of customising watch faces easily without needing extra software, keeping track of your fitness levels, and even seeing where you last used the smartwatch.

Of these features, our favourite is easily the watch face maker, bringing the power of a third party watch face system to people who may not know how to use one, simplifying the process and allowing you to truly customise your smart watch without needing to learn a new language.

The fitness side of things could also be helpful for people who haven’t jumped onto the whole health gadget craze bandwagon, providing information about calories lost, steps taken, and even every so often checking your heart rate to tell you if you’re using that big ‘ol blood pumping organ in your body enough throughout the course of the day.

Motorola has even paid attention to the way the 360 recharges, with a small recharge dock to fit the smartwatch into that can recharge the watch wirelessly.

This is one of those things we’d like to see on more smartwatches, because even though LG’s recharge options are basic enough and do a great job, Motorola’s looks like it could fit more than just one watch, and makes the watch feel more like a luxurious appliance for your wrist rather than just another gadget that needs juice.