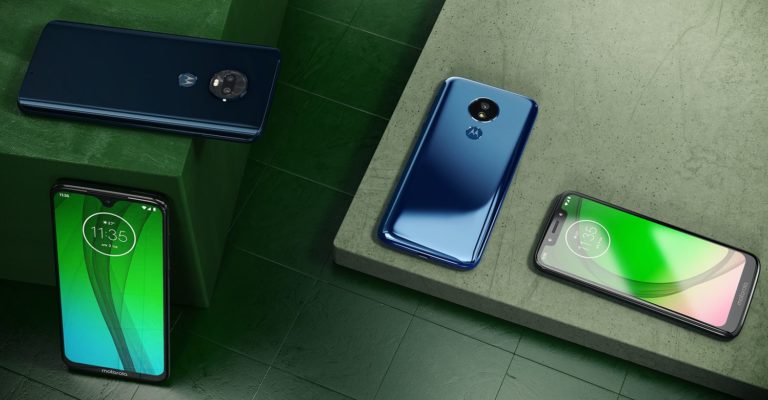 Motorola MWC 2019 announcements showed off Motorola’s Z3 and the Moto Mod 5G snap on, as well as its new g7 series.

The batwing Motorola is alive and well under new owners Lenovo and is starting to make money and kick goals again. Motorola MWC 2019 announcements were practical – and we think right on the money.

Let’s get the Z3 out of the way – it is/was a fine flagship using a Qualcomm 835 (two generations ago) processor. It and the lower cost Z3 play are the platforms for the innovative Moto Mods. The 5G mod  (for the US only at this time) simply clips on adding the modem, antenna and an extra 2,000mAh battery. Sound like a great idea.

The Motorola G7 series follow the good, better, best and even better again scenario with three models using the Qualcomm 632, one with the Qualcomm 636, and adding larger screens, memory and camera.

Motorola says, “Since Moto g redefined the smartphone market in 2013, more and more consumers are interested in premium phones at affordable prices. Generation after generation, we remain focused on our main consumer commitment: offering phones that have the premium features you deserve, without sacrificing the quality, affordability and dependability you expect.”

Motorola also hinted that the foldable Razr was more than a pipedream.

“If you go around the stores today, for me the phones all look the same. It’s difficult to see if it’s a Motorola, or [another brand]. How we differentiate to the consumer, show them something really different, that’s where foldables comes in. And that’s where Motorola also has a very big investment. I can’t say much, but we have one franchise that will have a very big impact there.”

Barounas added that there is a shift to affordable phones and that is what the G7 is about. 5G may dominate the discussion but its still a year or three away. “Every ten years you get one that will change everything,” he added.

All GadgetGuy can say is that these models offer everything Joe and Jane Average needs and should sell very well.