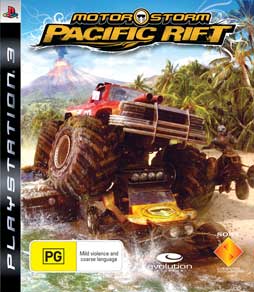 Finally, the PlayStation 3 feels like it’s getting into its groove, with this holiday season seeing a few truly innovative and high-quality releases that are gracing only the PS3. These exclusive titles are just what the console doctor ordered for Sony, and MotorStorm Pacific Rift is their big contender in the off-road racing stakes.

This is the second game in the series, with the first MotorStorm game having the dubious honour of being a flag-waver for the new PlayStation 3 console before the machine’s launch, promising very much and, in the event, delivering a whole lot less. What worked, though, was vast, open-ranging ‘tracks’ that, due to a complete absence of the hand-holding indicators racing game fans have grown accustomed to in the past, like directional arrows, big, stark signs and a map, gave the player an unmatched sense of freedom. It also got you lost.

So MotorStorm is back with the same crazy pace and that constant teetering- on-the-edge-of-destruction that made the first such a hit, but the absence of that map and the converging-branches level design of the routes conspire to slow the action down just when you want to be pressing pedal to metal, to stop and ask for directions. It’s better to follow than to lead, then, taking your cues from some madman up ahead, staying as close as possible for at least the first lap while you learn to pick a path through it, then hope to take him on the last lap for the win. So long as you don’t crash, which you do a lot, both through your own mistakes and poor design choices including inconsistent object destruction. This is only a real problem on certain levels – in others that very ‘openness’ is quite liberating – but where it happens the track design inhibits the very sense of freedom it’s meant to provide.

For all the crowing about being ‘delivered on Blu-ray’ and stunning scenery, though, the graphics in Pacific Rift are horribly inconsistent – character and vehicle design, in particular, verge on Elephant-man horror – and a lot of textures are just dreadful. And the fact that the game comes on a Blu-ray disc is a startling irrelevance, as far as we’re concerned.

Vehicles like the bike, buggy and even some trucks can be realistically flimsy, making the choice of vehicle-type critical and the Burnout-style slo-mo crash sequences are entertaining the first few times, before you start skipping over them. Ironically, for a game that emphasizes the extreme nature of the ‘alternative’ off-road vehicles, the rally cars are probably the most fun to drive, feeling fearsomely powerful and eager, but the motorbikes are far better this time around too, mad and marginal, and offer the additional challenge of having to be highly aware of the other traffic, lest they make mincemeat of you. Just like in real life. This vulnerability, though, is a constant threat during the frantic racing and maintains the sense of peril.

Unfortunately, the audio fails to really enhance this danger, Spartan in delivery and worsens the feeling of being detached from the environment rather than immersed in it. But MotorStorm is a lot of fun, regardless, for casual gamers. It’s chaotic, tense and the vehicle variation, with its attendant choices for tactics and routes, make it a standout offering in the racing game genre.

There’s a new, and very welcome, four-player splitscreen mode and 12-player online multiplayer for the more communally-minded, so if you’re looking for a game to show off your PS3, MotorStorm Pacific Rift is a decent choice.