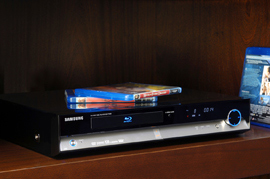 Those of us in Australia who have been closely watching the development of Blu-ray have had few questions about the hardware. What has remained a mystery is the software. In what format would it appear? Which film studios would support it? What titles would be available?

It?s like 1997 all over again, though, with the trickling out of DVDs. Nobody can really tell us what will be coming, or how it will be tricked out. We shall just have to wait and see each title as it appears.

But one thing we do know is that every major Hollywood film studio, bar one, has committed to Blu-ray. The exception is Universal Studios, which will be remaining firmly in the HD DVD camp (several of the others will be supporting both formats).

So far, all we have been able to see is half a dozen releases from Sony Pictures Entertainment (RRP $39.95 for catalogue items, $49.95 for new releases). The titles made available to us were Hitch, S.W.A.T, Hostel, RV, Tears of the Sun, and Into the Blue. All six of these feature a number of Blu-ray innovations. The most obvious is the superlative picture quality provided by 1920 by 1080 pixels of resolution. All six, interestingly, are US-style 60 hertz discs. At the moment that means that they tend to appear a little jerky at points due to the way that 24 frames per second film is transformed into 60 frames per second video. But we expect that to change very soon, as Blu-ray players capable of delivering progressive scan 24 frames per second video appear.

All six also offer both Dolby Digital and uncompressed 5.1 channel digital sound. For two of them (S.W.A.T. and Into the Blue) the Dolby Digital uses the full 640kb/s allowed, rather than the mere 384 or 448kb/s it has been limited to on DVD.

But perhaps the cleverest feature is the pop-up menus. Press the right key on the remote, and the main menu (but, of course, not its background picture) instantly appears right over the top of the movie, which proceeds on its merry way. So you can easily change the audio track or the subtitles, or select a special extra, all without the hassle and delay of returning to the main menu.

Keep watching this space. As more Blu-ray titles appear, we?ll be telling all that they have to offer.

Want to know more about Blu-ray? Read our Australian-first review of the Panasonic DMP-BD10,Â our our Australian web-first Samsung BD-P1000Â review. The two players are compared in our Blu-ray vs Blu-ray story.

For some more background on the format, try our article Into the Blu-ray.