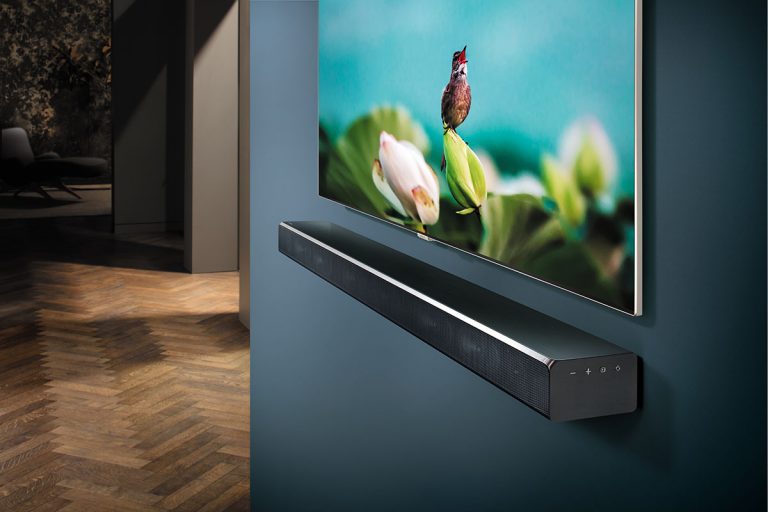 At the Sydney Opera House yesterday Samsung demonstrated its newest soundbar. In my opinion, this is what soundbars should have been all along.

Samsung has been doing some pretty nifty audio work lately, having established the Samsung Audio Lab in California, staffed it with highly qualified and experienced engineers, and told them to get to making things sound good. The MS750 soundbar is not the first product to emerge, but it is the most startling so far, in my opinion.

It’s startling because it sounds, well, like a pair of high quality bookshelf speakers, with solid bass and a smooth, accurate performance.

Priced at $999, the MS750 takes what you might call an active approach to correcting for distortion. The laws of physics are such that it’s difficult to get strong, deep bass from compact devices, including sound bars. To do that designers tend to have to try to balance between reasonable levels and driving the smaller bass drivers too far.

What Samsung’s Audio Lab has done is refine this balancing act to an extremely high level, and make corrections for when things might be driven too far. It does this using four separate techniques. I spent a bit of time with Allan Devantier, the head of the Audio Lab, finding out how the system achieves its results.

First, it uses all six of the bass midrange drivers to handle the deep bass. That is, it takes the deepest bass, mixes it down to mono and sends it to all six. The higher frequencies remain individualised for each driver. That makes sure some aren’t merely idling while others are running out of capacity.

Second, it uses a lower crossover between these drivers and the five tweeters (two of them upwards firing). It calls the tweeters “wide range” and says that they handle the frequencies all the way down to 700 hertz, rather than the 2000 hertz which would be closer to the norm. The main reason for this is not to reduce the load on the mid/bass drivers, although it has this effect as well. It is to reduce interference between the tweeters and the mid/bass drivers in the frequencies they handle in common. The larger wavelength at 700 hertz compared to 2000 means, when the drivers are placed close together, almost no destructive interference between the two, which makes for a wide, smooth sound field. Everyone gets good sound, not just the one person sitting right in front of the middle of the soundbar.

Third, it uses highly developed “limiting”. That’s a process familiar to pro audio people. The sound is adaptively adjusted – limited – to avoid overdriving the system. It’s like a volume control being slightly adjusted for specific frequencies, acting smartly in response to the actual content being played.

Finally, fourth, the system uses active distortion cancellation. In a way it’s a bit like noise cancelling headphones. They measure the noise in the environment and insert into what you’re hearing the precise opposite of the noise, so that it’s cancelled out. The Samsung HS750 soundbar anticipates the distortion that its bass/midrange drivers will produce for a given output, and feeds the precise opposite into the signal so that it’s cancelled out.

That is conceptually simple, but very hard to do in practice. There are some subwoofers, for example, which do that by incorporating a motion detector on the cone of the subwoofer and using that to actively monitor what it’s doing (my 15 inch sub does just that). But that can have its own problems. Instead the Samsung Audio Lab has modelled the behaviour of the bass/midrange drivers, and uses non-linear mathematics to develop very precise corrections that are appropriate for what the driver’s doing at any instant. To get to that point, an incredible array of measurements have to be undertaken, and then analysed to produce useful models.

So, how well did it work?

At the demonstration, the Samsung people played a few clips with a view to demonstrating extremely powerful bass. In fact, what the clips demonstrated was appropriate, musical and effective bass. It wasn’t overblown. It was at the right level, and very clean. It was, as I said at the outset, as though high quality, largish bookshelf speakers were playing. Not quite subwoofer depths, but all the musical stuff was present and proper. The most impressive part was the opening sound of Adele’s piano in the opening chords of “Hello”. Way better sounding than any soundbar I’ve previously experienced.

The Samsung people had Spotify hooked up to the unit and kindly ran through snippets of a few tracks of my choosing. The guitar opening of Jethro Tull’s Thick as a Brick was remarkably well articulated, and when the music opened up after a few bars, there was no sense of it being held back, nor any feeling of it being harshened by the sound bar. A bit of Rage Against the Machine’s debut revealed a very impressive kick drum, and good control allowing the “silence” around the music to be evident. Glenn Gould’s piano on his 1981 version of Bach’s The Goldberg Variations were delivered effortlessly and with impressive balance. “Wrapped Around Your Finger” by The Police again had a very solid and powerful kick drum, clean delivery, and with the deep bass line somewhat recessed, principally, I think, because the listening room effectively had no nearby boundaries (pretend rooms had been created with curtains, but cloth has no effect on bass).

The Samsung HW-MS750, has six bass/midrange drivers, three wide range tweeters which face forwards, and two different (but also wide range) tweeters that fire upwards. Each driver has its own “Crystal Amplifier”. It has two HDMI inputs, one output and supports full UltraHD video signals. It also has an optical digital audio input and has WiFi and Bluetooth built in. It will decode the preferred audio formats for Windows and Macs, including Apple Lossless, MP3, OGG and FLAC.

The soundbar is 115cm wide, 8cm tall and 13cm deep and weighs 6.3 kilograms. It can be enhanced by the addition of wireless surround speakers and a wireless subwoofer.