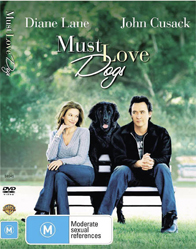 It is a little soppy, but if you are primed for a good night in with your other half then this film isn?t the worst thing you could be watching. Must Love Dogs is yet another romantic Hollywood comedy, but fans of John Cusack will enjoy the film, even if the premise, which revolves around Internet dating and the kinds of losers you can meet online, is passé. The film was written and directed by Family Ties sitcom producer Gary David Goldberg. You have been warned.