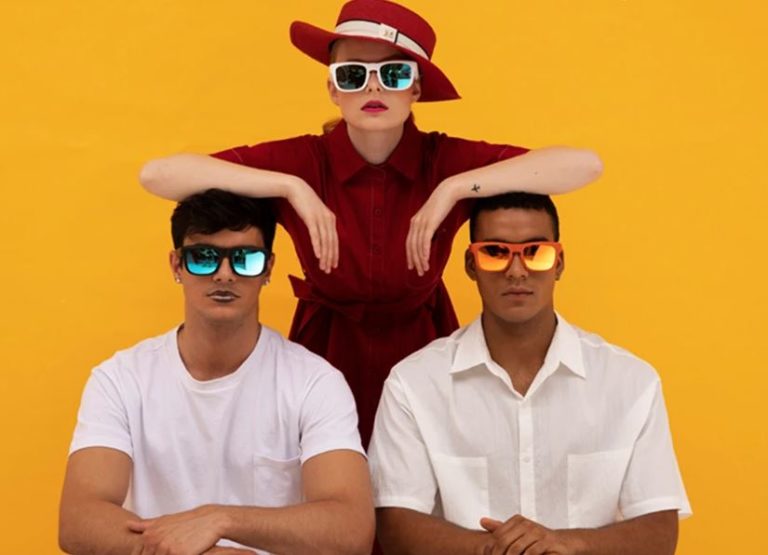 Mutrics are smart audio glasses – or as GadgetGuy has dubbed it and Bose Frames – soundglasses.

Mutrics are functionally equivalent to Bose Frames (review here), and both have strengths.

For example, both have

No this is not meant to be a shootout – Bose buyers are a breed unto themselves and want the brand cred that Bose brings.

Mutrics, on the other hand, is relatively unknown and started life in 2017 as a Kickstarter project. This is its fourth-generation product debuting at CES 2019.

Putting both side-by-side they look like they are from the same stable. OK, this is a Bose Frames shootout!

Price: US$129 but there may be promotions so look around online

Black nylon frames with no adjustment for the nose bridge or arm length.

Bose are slightly more stylish, and I do not like tye Mutrics blue lenses (as reviewed) – but you can order them with a non-polarised grey lens.

You can fit prescription lenses without voiding the warranty.

Summary: Bose is a little more elegant (if that is the right word).

Mutrics is 159mm deep compared to Bose Alto at 162mm.  The arms (ear hooks) have rubber grip pads making them a little less likely to slip off your nose that Bose.

Both the Bose Frames and the Mutrics are non-adjustable and unless you have the perfect head size will slip off your nose bridge. An optometrist should be able to apply gentle heat and radius bending to make the ear hooks a better fit.

We repeat the warning that these are sunglasses and lenses can scratch.

Mutrics is IP55 rated. The first 5 means the prevention of ingress of dust must be sufficient so as not to interfere with the satisfactory operation of the equipment. So, you can wear these to the snow or desert.

The second 5 means water projected by a nozzle (6.3 mm) against enclosure from any direction shall have no harmful effects. It is rain/sweat resistant.

Summary: Mutrics IP55 versus Bose IPX2 is a strong incentive. Both have similar lasting quality.

Mutrics uses a Qualcomm BT 5.0 chip with aptX high-def sound and Qualcomm noise cancellation technology. No, they are not noise cancelling – no open ear headphones can be. helps for handsfree calls and automatic gain in noisy environments. It is married with a TI amp and DSP to produce virtual (not real) 5.1 sound.

The Qualcomm SoC has up to 65% lower power use (than BT 4.2), which accounts for the exceptionally long 8-hour battery life.

As it is industry-standard, it will pair with any Bluetooth source device without an app. Bose Frames has an app but its not necessary for straight BT use.

It has an on/off button (as well as auto power off) and up/down volume buttons, and these are for accepting/rejecting calls, playing music (forward/back) and accessing the voice assistant.

The 140mAh battery takes a 5V/.5A to 5V/3A charge via a USB-A to a proprietary magnetic clamp.

Over five days of walking for a total of four hours, the charge level is 40% – pass.

Summary: Bose has a 3.5-hour battery, and if battery life is important, Mutrics has over twice the life for the same charge time.

These are ‘open-ear’ meaning you can hear your surrounds clearly.

Mutrics claims virtual 5.1 sound that means Left/Centre/Right, Left/Right and a sub. The claim is (impolitely) ‘hyperbole’.

The tiny speakers sit in the arms and give a decent left/right sound stage – separation is not as wide as over/on/in-the-ear phones but nor should you expect it to be.

But unlike the Bose where the sound appears to emanate from within your head, these have a far better L/R separation, and wider sound stage (music appears to come from outside your head), e.g. sound has more directionality.

It is not a ‘full’ sound that you would expect from over/on/in-the-ear headphones, but it is surprisingly listenable with good crisp vocals, just enough bass and treble.

We could not measure frequency response or volume as our test equipment is just not up to that task. So subjectively (using bass tracks, vocals, and symphony):

This is a mid-sound signature that is an OK for voice, podcasts and most music.

When walking in relatively quiet suburban areas, the sound is clear, although louder passing cars can drown out the volume. If you are in quieter surrounds its fine. It works well for hands-free calling.

We could not measure volume, but it is a little lower than the Bose. At full volume (approximately 80% Bose) it has a relatively clean sound.

I think soundglasses are perfect for walking and if the lenses were right, office use too.

While Bose has brand credibility, Mutrics has the technology edge and its about two-thirds of the price. On that basis, it gets the tick and is a strong contender for Bose Frames.

Features
Value for money
Performance
Ease of Use
Design
Reader Rating0 Votes
Open ear audio is good for walkers
Three control buttons are easier
Sound is as good as it gets for soundglasses - particularly in aptX mode
BT 5.0 and aptX is impressive
Great battery life
Won’t replace your existing headphones – more supplement them
Uses a proprietary charge cable
Could do with a little more volume - its not an issue
4.1