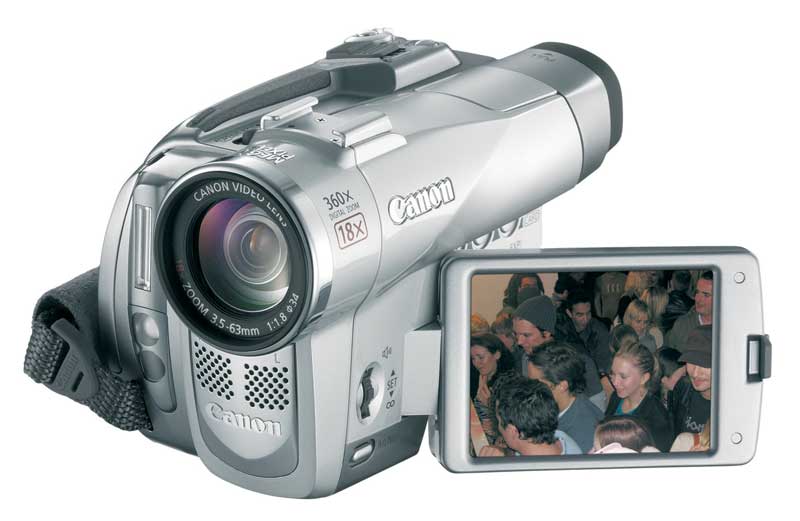 The MVX330i from Canon packs in a larger 0.22-inch CCD (most budget cameras are only a smaller 0.16-inch size) that reduces video noise sensitivity. It also enables the camera to capture 1280 x 960-pixel stills. Unfortunately, this is another camera that lacks ADC, however Canon has focused on video quality here, which isn?t bad and a step up from the budget cameras.

The big one is the true widescreen. Allowing for the fact that this is a single chip camera the 16:9 pics are excellent. Older model cameras used a vertically cropped 4:3 image to get 16:9 but thankfully that?s becoming a thing of the past as manufacturers realise the market is changing and more people want true widescreen. Cropped 4:3 often looked soft but using a camera like this eliminates that problem and there is no discernable focus issue on this camera.

The best bit is that the flip out screen will change to 16:9 when wide is selected (it appears as letterboxed). Older cameras and even some new ones stretch the picture to fill the 4:3 screen and the image looks odd (even though it recorded with the right aspect).

Curiously only the LCD screen does this. The conventional viewfinder stretches the picture to fill the screen vertically.

Digressing slightly I wonder which manufacturer is going to be the first to eliminate the ?old? viewfinder. Have you noticed they?re getting smaller and smaller?

The MVx330i has all the usual stuff you?d expect on a domestic level camera including a good image stabiliser, which Canon do very well. It shoots still pics to an SD card at 1.23 mega-pixels ? OK for happy snaps and it?s 18x optical zoom is a good length for most jobs, plus there?s the usual enormous digital zoom which hopefully you?ll never use. The tape ejects out of the side of the camera and I?m hoping this is a growing trend where the makers have realised the sheer dumbness of having the tape come out the bottom (did none of them use tripods ever?)

This is a run of the mill domestic camera that sells itself on its excellent widescreen ability. Canon?s marketing gurus may well have tapped a rich vein here as more and more punters head out into Plasma/LCD land.

Well there?s not much actually. Apart from its minimal manual controls (which most users in this group never use) there?s only the fact that it?s a single chipper ? but that?s what you get for the money. The lens (and increasingly this will matter more) is also small but again that?s what you get at this level and for domestic use its fine.

At $1099, it?s a little pricey but it can store images away on SD flash cards and it?s one of the few cameras at this price that captures genuine 16:9 aspect ratio widescreen video. The number of pixels per frame jumps up from 860,000 to 920,000 in this mode. Unfortunately, the widescreen button is behind the LCD screen so not quick and easy to get if you?re using the colour viewfinder. A good camera but Canon?s MVX40i has better features for moviemakers.

The current batch of Canon?s smaller cameras are being sold on their ?real widescreen? function. This means that the 16:9 recording is a true widescreen and not a cropped 4:3 image and the end result should be sharper pics with a proper wide aspect.