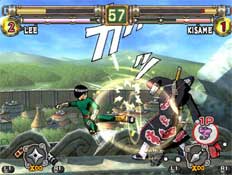 Taking the experience to new heights of excellence, Naruto: Ultimate Ninja 2 lets players choose from over 30 playable characters from the hit TV show including Naruto, Sasuke, Kakashi and more, play through over 60 thrilling missions, take on a series of challenging mini-games, and test their skills with head-to-head combat on 16 unique battle stages.  The Ultimate Road story mode takes players through key plots from the TV show to ultimately unlock a brand new original storyline, while Vs mode lets players do battle with the computer or go head-to-head with their friends to see who has what it takes to be the ultimate ninja.

Bringing a new level of depth to the gameplay, Naruto: Ultimate Ninja 2 introduces RPG elements to the series for the first time, with a system of character upgrades which lets players earn points to enhance strength, defence, chakra, agility and even special abilities to give them the edge over their opponents in battle.  Players can unleash their chakra to perform multi-level super attacks capable of laying waste to even the most deadly of enemies.

With tons of unlockable features including characters, movies, music and more, a dazzling array of gameplay modes, and an authentic Naruto experience with moves, story and original Japanese voiceover straight from the TV series, Naruto: Ultimate Ninja 2 packs a devastating punch for fans of the franchise and anyone looking for a damn good punch-up on PS®2.

Naruto: Ultimate Ninja 2 for PlayStation 2 is scheduled for release across Australia in spring 2007.