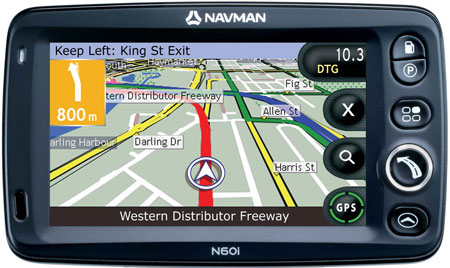 Navman’s N60i offers a unique and not entirely gimmicky photograph-to-navigation option along with a large screen into a GPS that’s easy to use for in-car navigation, although less than stellar if you’re in pedestrian modes.

The one factor that leaps out at you from the N60i, even before you’ve looked at the camera on the back, is the size of the display. At 4.3 inches diagonally (that’s 110 mm for the metrically inclined), it’s larger than any other GPS we’ve seen recently, which naturally enough equates to more screen real estate to show you upcoming turns, twists and road directions.

The big selling point of the N60i is its inclusion of Navpix, which incorporates a low-megapixel digital camera into the body of the GPS. This is no happy snapper, however, as the photos the N60i takes – or that you import – contain the GPS coordinates of where the shot was taken. These can then be used to navigate back to the same spot, time after time. Navman also offers plenty of Navpix that you can download from their website, including a co-branded deal with Lonely Planet to highlight points of tourist interest all across the globe.

The N60i uses its 2GB of internal storage to provide the latest 2006 Sensis map data, which puts it in pretty much the same boat as every other GPS vendor out there. Additional maps can be purchased direct from Navman if you’re a heavy international traveller. The N60i uses a combination of side-mounted buttons for menu and quick POI/Parking location and the touchscreen for navigation, and it’s a combination that works very well indeed.

The N60i’s navigation planning was for the most part quite logical, and GPS lock-on was about average. One thing we noticed about the N60i when using it for longer drives was how chatty it was compared to other GPS units, even if the turn you need is in fact quite a long distance away.

The Navpix function seems just cute at first, but even a small amount of use showed how very well implemented it is in the N60i. Even without the downloadable Navpix, it’s very handy to be able to take a photo and always navigate back there, no matter how blurry your memory (for whatever reason) may be of the locale.

The N60i works well when screen-mounted on a windscreen, but we couldn’t entirely say the same thing about its performance in handheld mode. The rather harsh anti-glare coating makes it a touch murky when handheld, and we found we had toÂ  carefully tilt the unit in order to be able to discern it in some light conditions. While we’re being picky, it’s also somewhat disappointing that the 2GB of storage in the N60i is for Navpix and map data only. Plenty of other GPS units on the market at this price point offer Bluetooth mobile phone synchronising and MP3 playback, but these features are absent in the N60i.

Without the Navpix technology, the N60i would be just another dull GPS. With it, it’s a serious contender for your GPS buying dollar.