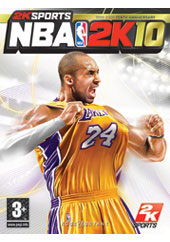 First developed by Californian coders Visual Concepts, the ‘2K’ series of sports games took sports giant EA on at its own game and, for many people, beat them pretty soundly. Top of the goodness pile was amazingly realistic animations and accompanying commentary that truly felt like the game was taking note of your actions and providing a suitable narrative – nothing better for drawing the player into a sports game and really creating a sense of involvement. Selling to Take Two Interactive in 2005, Visual Concepts are still the crew making 2K sports games but something is seriously broken with NBA 2K10.

Boasting what 2K likes to call ‘out of the world graphics’, we certainly felt like we were on a different planet playing this game, because a lot of the animation is more reminiscent of the late Michael Jackson’s moon walking than realistic basketball moves. Skating in place, turning robotically on a dime and horribly stilted arm animations are everywhere in NBA 2K10, as are clipping (parts of one player passing phantom-like right through another). It’s hard to move past this, frankly, despite a number of really good new elements this year, including our personal favourite, the ‘Save and Quit’ function, which allows players to save a game at any point in the action, quit, and come back to it later.

The new NBA Today feature is also very nice – essentially real-time tracking of the actual NBA schedules and news, which then feeds back into the games you play, right from the start by offering you the chance to play real-life, scheduled games for the day you boot up the game and even affecting in-game commentary on a more continuous basis.

You can stuff a title full of all sorts of superb characterisation (signature moves and expressions, etc) new features and clever trinkets but in a sports game if the basic gameplay is broken, you’re sunk. NBA 2K10 is on a raft and taking in water. Along with the dreadful animations – most feel like they’re missing half the frames – the actual frame rate is very erratic, resulting in a stop-start game that looks like you’re playing in a disco under strobe lighting. This is very noticeable in the main game, but even more so in the other game modes like ‘NBA blacktop’. The animation of your player clipping the top of a ‘prop’ you’ve placed during the dunk contest as a challenge is funny for a few times, but in reality looks ridiculous.

Worse, the requirement to manipulate the stick twice before you even jump is just too complicated for novice basketball fans, ruining what could be a really good bonus mode, and this complexity makes it into the main game, as many of the other moves you’ll need to really get the best out of this game are counter-intuitive. Too frequently there are delays between a button press and an action, passes too often go awry and obtrusive promo banners continually pop up and obscure play.

The bottom line here for us is that NBA 2K10 provides far too jarring a play experience to be enjoyable. Anyone short of the most rabid basketball fan will be put off by the horrible graphics, the complicated controls and a career mode that feels too punishing to be enjoyable. However, if you can ignore the frame rate (good luck) and are a very serious b-ball fan, elements like NBA Today, the authenticity of the ‘My Player’ mode and the advanced IsoMotion moves with comprehensive post play using the right stick may be enough to keep you hooked.