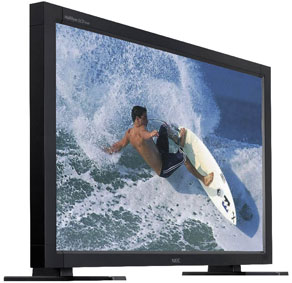 Unlike other big screen LCDs, the NEC MultiSync LCD-4610 is primarily marketed as a public display unit, using their crisp picture and bright colours to maximum effect. This doesn’t mean the LCD-4610 doesn’t also make for great, if pricey, living room viewing.

The LCD-4610 uses NEC’s Rapid Response technology to improve pixel response times and minimise motion blurring. With a 16ms response time, each pixel is capable of switching on and off over 60 times a second, making for a smoother picture.

The brightness and contrast are average for LCDs of this class, and fall a fair way short of similarly sized plasmas, but LCD does offer an exceptionally clear picture.

The LCD-4610 is well equipped in terms of analog connectors, although it does lack an HDMI digital connector. It does have both DVI-D and VGA though, so it can be used to connect to a PC or set-top box.