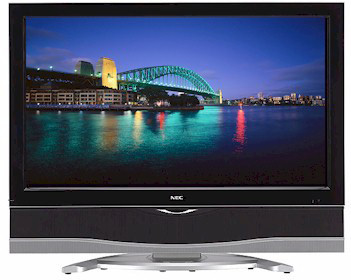 NEC, long associated with plasma TVs, is swinging its weight behind LCD. And you can see why, since the size differences between the two are being rapidly eliminated. The NLT-46HDB2 may feature an LCD panel but it still manages to deliver a true 46 inches (nearly 117 cm) of high definition picture.

A big part of delivering a high definition picture is not just the panel (which offers a decent 1366 x 768 pixels), but the source. And this TV is well equipped here. Of course, it has built in a standard analog TV tuner, but it also has a high definition digital TV tuner.

And with Blu-ray and HD DVD now appearing, you can plug in both players because it has two HDMI inputs, both of which of course support high definition input, up to 1080i.

There are also plenty of analog inputs, except that for some reason there is only one S-Video socket, and that is part of the side-mounted AV cluster. One of the three rear composite video inputs could be usefully replaced with S-Video.

An optical digital audio output allows you to get Dolby Digital to your home theatre receiver for a step up in audio performance. There are also the features you expect with a premium TV, such as Picture-In-Picture and Teletext.

Nearly $6,500 is both a good and a bad price. For an LCD TV of this size and capability, it is brilliant. But it also runs up against the 50 inch (126 cm) class of plasma TVs. We have covered the pros and cons of plasma vs LCD extensively on this site, so you will have to choose which attributes you prefer between the two, given the similar screen sizes and prices.

With such a large screen, the NEC NLT-46HDB2 really pumped out the light. It will never have trouble competing with ambient lighting. On the other hand, it also has a relatively low contrast ratio ? 1200:1, compared to the 5000:1 ‘dynamic’ levels offered by some of the competition – so in a darkened room it glowed quite a bit during dark scenes, and some low-level detail was lost.

It also had a bit of trouble de-interlacing some standard definition TV signals from time to time, especially in Australian Idol, where a bright red background behind the judges showed obvious combing around their shoulders.

With high definition signals the detail was beautiful, except for times where camera pans were a touch too fast, introducing a bit of picture smear, despite the 8ms response time specified by NEC for the panel.

However, with good film-sourced DVDs the picture was generally superb since the de-interlacing circuitry wasn’t required, with gorgeous colour, excellent sharpness and a good sense of picture depth. The smoothness of the LCD technology also allowed one to sit closer, and thus achieve a more cinema-like experience, than a plasma TV.

Even the sound was quite good for an LCD TV, thanks to the relatively large speaker enclosure under the main body of the TV.

Overall
Features
Value for money
Performance
Ease of Use
Reader Rating0 Votes
Massive picture with LCD brightness and sharpness. Built-in HD digital tuner. Optical output for connection to home theatre system.
De-interlacing a bit finicky on SD TV reception. Some loss of fine detail during pans as picture smears. Could do with a rear S-Video input.
3.8