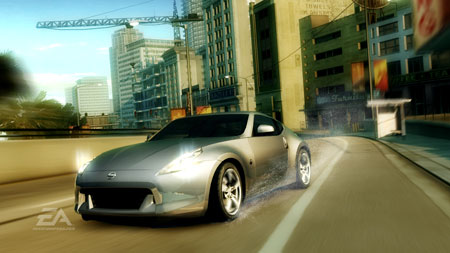 Need for Speed Undercover features stunning Hollywood-style live-action in-game movies in which the player is recruited by Federal Agent Chase Linh, played by Maggie Q (Mission Impossible III and Live Free or Die Hard), to go deep undercover in order to infiltrate and takedown a ruthless international crime syndicate. Posing as a wheelman, the player will be required to prove themselves by completing jobs, racing through speedways, dodging cops and chasing rivals.

Need for Speed Undercover also features its signature real-world damage and car customization for over 55 of the hottest licensed vehicles including the Mercedes-Benz SL65 AMG, Audi R8, Porsche 911 GT2 and the all-new unreleased 2009 Nissan 370Z.

The all-new Heroic Driving Engine delivers an unprecedented level of control allowing the player to execute incredible high-performance moves at 290kph. The player will need to master the Heroic Driving Engine in order to evade the cops and take out opponents while navigating over 100 miles of open roads, including an expansive highway system. These causeways are the setting for the high-speed, high-stake chase sequences that will push the player to the limit. An enhanced new A.I. mechanic delivers a realistic high-energy action driving experience with ultra-aggressive and intelligent cops using actual high-speed pursuit techniques to take the player down.

The game will be available for Xbox 360, PlayStation 3, Wii, PC, PlayStation 2 computer entertainment system and PSP (PlayStation Portable), Nintendo DS, and for gamers on the go, they can download the mobile platform from any Australian telco. The game is rated G.
RRP prices are as follows: