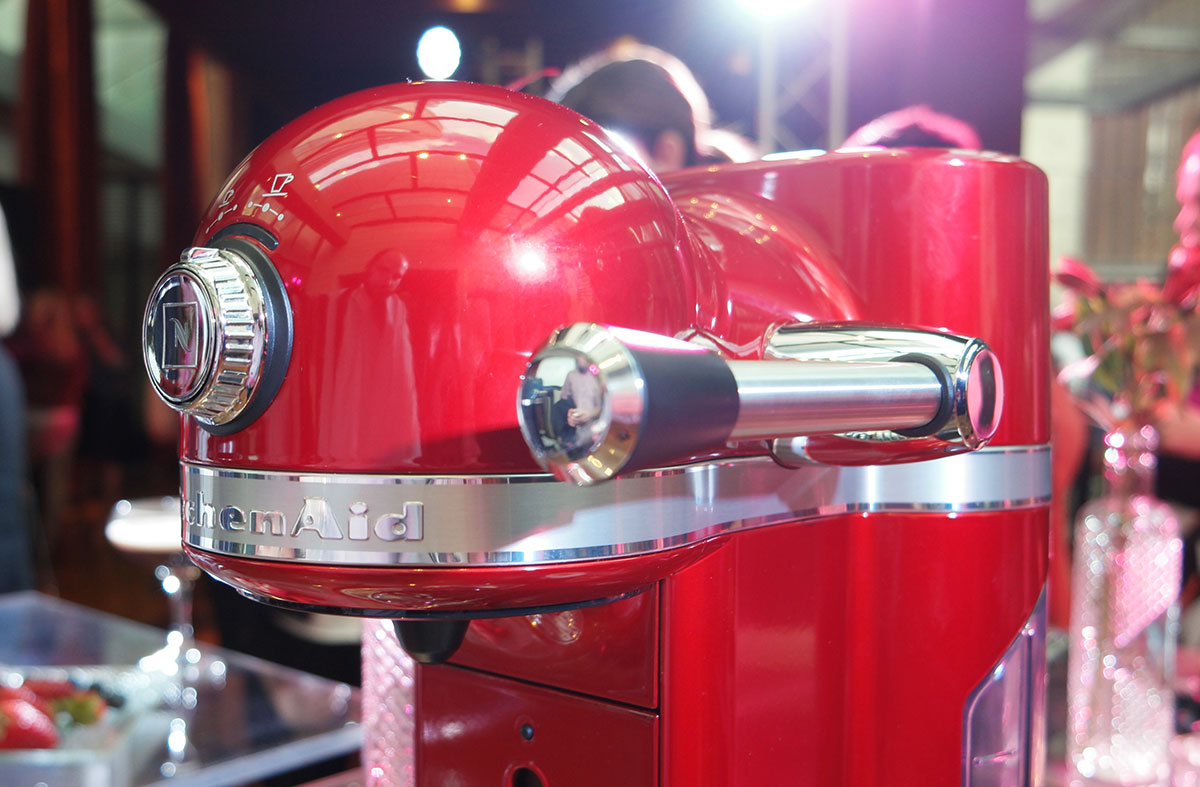 Nespresso’s encapsulated coffee machines have never been about the properly premium finish, what with most of its machines being made from plastic, but in a new machine built by Kitchenaid, it’s all about the old fashioned charm.

This week, a new Nespresso machine will be hitting stores, arriving in the Myers and other major appliance selling department stores, as well as Nespresso’s own flagship stores around Australia, and while it’s another Nespresso coffee pod machine, it also brings with it some old school charm.

Designed and built by Kitchenaid, it’s an appliance that looks less like a coffee maker and more like something you might see next to a stand mixer, the sort of thing that Kitchenaid has become known for over the years.

The new appliance doesn’t have the best of names, and is merely called “Nespresso by Kitchenaid” (no, we’re not kidding), though its name is indicative of what you’re getting: a take on the Nespresso pod system specs as conceived and built by those classic 50s and 60s appliance designers at Kitchenaid.

As such, the body on this thing is sturdy steel and not just designed to look like it was crafted from metal, as was the case with Nespresso’s previous top tier model, the DeLonghi-built Maestria, which as we understanding it will be taking a backseat to this new model and gradually fading off into the distance.

Yes, this is a full metal body, and it looks the part, with Kitchenaid borrowing from the look of its well-established KSM150 stand mixer and applying those retro looks and beautiful build to a new machine.

It’s not just about the casing, either, as the usability of the machine comes down to two main elements: a level and a knob. It almost sounds poetic, but there’s a loading lever that allows you to load in and hold the Nespresso pod by pulling the hefty mechanism up to open the capsule door, so you can throw the pod in and then lower the lever to lock it in place, followed by an electronic knob where you can set the drink style to one of six options before pressing the main button in the middle.

“As always at Kitchenaid, we focus on attention to detail, on design, quality, and craftsmanship, and I think when you look at the product and when you play around with it as well, you will see the product really holds up to our standards,” Kay Oswald (below), General Manager of Kitchenaid for Australia and Managing Director for the company in the Asia Pacific region.

“This is a real game changer, and a product that truly sticks out from the crowd.”

A large 1.4 litre water tank sits out the back of this unit, providing numerous coffees depending on the strength and style of your regular beverage, and while there’s no milk component built into the unit’s design, Nespresso has said that its Kitchenaid machine will arrive with the standard Nespresso Aeroccino milk texturiser.

Aside for the staggering good looks — seriously, this is a very spesh looking coffee machine — we quite like the inclusion of what appears to be a cup holder, and potentially cup warmer.

Nespresso won’t say that the top area is a cup warmer, a feature on high-end traditional espresso machines, but given the thermoblock is located just under the top section where you could leave glasses, it may have that effect, though will be dependent on how fast the machine is to warm up. Essentially, while the first cup may not warm up there, the second just might, though it does appear to be unintentional design.

Inside, however, the mechanics are all spec’d to standard Nespresso design, meaning it’s the same pod style and the same 19 bar water pump, with the result being idential coffee each time, provided the same pod is used, part and parcel with the Nespresso encapsulated system.

But it’s the outside that’ll drive people to this one, and given that it would look good next to an existing Kitchenaid appliance, you may well be telling the world that your kitchen and home can make excellent cake, excellent coffee, or if you’re feeling up to it, excellent coffee-flavoured cake.

Nespresso by Kitchenaid is arriving in stores now and will sell for a recommended retail price of $799.