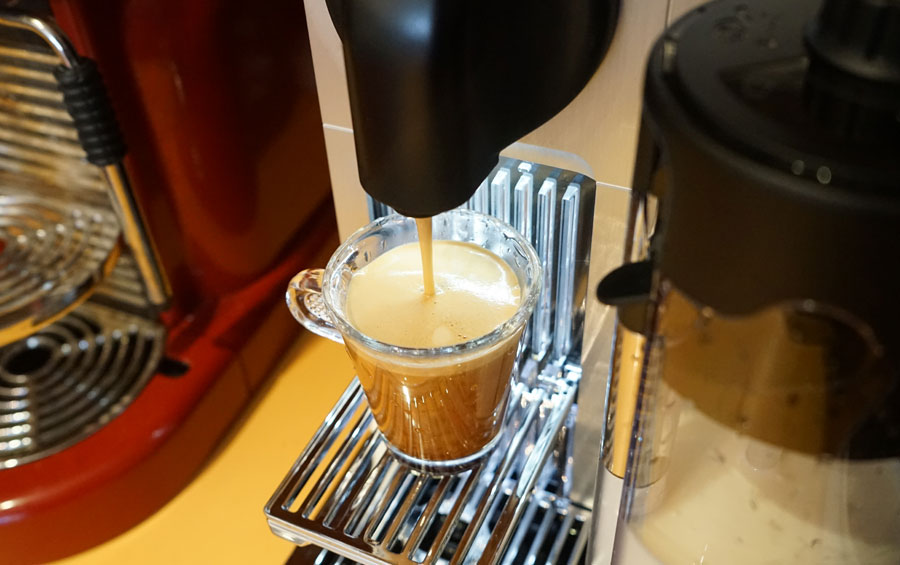 The new kitchen appliance brings with it a new sense of style, bigger tanks, and a touchscreen, which is something you don’t generally see in pod-based machines.

The water tank in the Lattissima Pro holds more water than the previous generation, which potentially translates into more cups of coffee, with 1.3 litres available here, which will also be used in conjunction with the 500ml milk tank, both of which are removable.

Nespresso’s range of coffee pods is taken here, and the spent capsule tray holds a maximum of 16 pods.

Just like it is in every Nespresso coffee pod machine we’ve seen up to now, there is a 19 bar pump here, working in conjunction with a Thermoblock to heat the water.

Something that is different, however, is the connection port for the milk frothing system, which not only allows DeLonghi’s “Latte Crema System” milk frother to be plugged in, but when unplugged, can also support an included hot water spout, which will dispense hot water instead of textured milk.

Controls for the machine are handled through a light-up tactile button panel, which includes three espresso varieties — ristretto, espresso, and lungo — as well as two milk-based coffee styles, letting you make cappuccino and a latte macchiato (what basically equates to a really tall cappuccino).

A hot milk option is also available, as is one for hot water when the aforementioned water spout is plugged in.

A white light is built into the Nespresso unit, lighting up the glass or cup, and a foldable drip tray is here, too.

Designed and built by DeLonghi, the Lattissima Pro is the new high-end and flagship Nespresso machine coming to market right about now.

Encased in a brushed aluminium casing, and sporting a big water tank capable of making several cups of coffee, the machine is pretty much geared at the Nespresso lover who is going for the most convenient cup they possibly can have, with an automatic milk preparation system capable of creating a cappuccino or latte macchiato with only one button pressed.

Setting it up in our retro GadgetGuy kitchen, the Lattissima Pro is certainly a good looking unit, with a slick and shiny look, and a design that almost resembles a softened cube. Everything is built into the shape, and so you won’t have any parts extruding from the machine like you do on the Nespresso UMilk, but you can remove elements for storage in other places, such as putting the milk frother in the fridge to keep your supply of milk cold and fresh.

In a first for a Nespresso machine, there’s a screen here, able to guide you through the few menus of product, as well as inform you precisely what style of drink you can make.

Using the machine doesn’t really require an LCD screen, truth be told, but it’s a premium feature that no other Nespresso machine has, and very few coffee machines at that.

In fact, to use the Lattissima Pro, you just need to follow the same basic directions that most of the machines rely on: stick the pod in, select the coffee length, and then let the Thermoblock go to work, pulling in water from the 1.3 litre tank on the back, puncturing the Nespresso aluminium pod, and pushing out liquid joe through the spout at the front of the machine.

As with all Nespresso machines, the result here is the same and bang on with what we normally see, with a lovely crema to the cup in either the ristretto (short), espresso (medium), or lungo (long) settings when used with a pod rated for use on those settings.

At the time of publishing, Nespresso had 22 always available varieties of coffee pods, which it calls “Grand Crus,” each designed to produce the exact same cup — and consequently taste — of coffee each time you make it.

But the Lattissima Pro has another trick, and that is to automatically make milk-based coffee drinks for you, something that you can do manually with an Aeroccino magnetic frother by hand on other Nespresso units.

On this model, though, you can give those hands a rest, and simply by filling up the removable milk container and then plugging it in, the Lattissima Pro can texture the milk (a process that creates foamy milk), and then proceed with making the espresso and pouring that in, a process that makes — in this instance — a cappuccino.

This happens in the head of the milk unit, while keeping the milk in the bottle at a separate temperature, which means it can be removed and refrigerated immediately after without any obvious bacterial build-up.

A taller drink can also be made, with the latte macchiato the only other milk based coffee drink you can automatically make from the machine. Fortunately, both of these settings can be programmed for varied amounts of coffee or milk, allowing you, the customer, to define how much milk or espresso your milk based drinks have.