Simply U: we review Nespresso’s UMilk 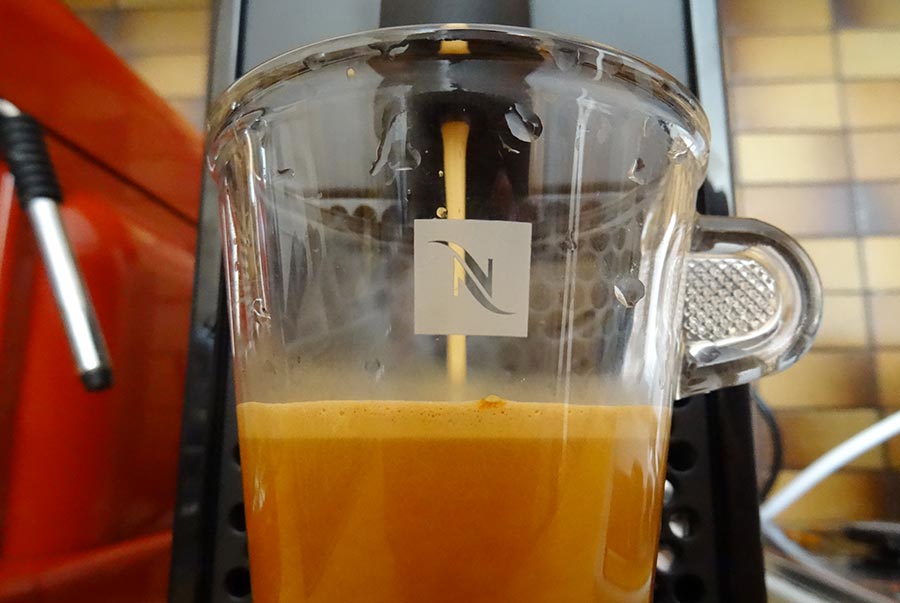 There are plenty of coffee pod competitors out there, but only one Nespresso, and this year the big N plans to show how it can improve its entry-level U machine, by cutting out one cord and combining two devices.

The latest edition of Nespresso’s U, the UMilk takes the combination of specs applied from the first U and finds a way to make it even better by doing something that makes a lot of sense: combining the extra milk frother that is the Aeroccino3 into the main unit.

In the UMilk, the Aeroccino’s base station sits off to the side of the main machine, removing the extra cord and making the whole machine feel more connected. Previously, the Nespresso U arrived with a separate Aeroccino base station to start the magnetic Aeroccino milk preparation canister, the same one supplied with the UMilk.

Outside of this, it’s more or less the same U as last time, with a removable 800ml water tank, 19 bar pump, three touch buttons for different coffee measurements (ristretto’s 25ml, espresso’s 40ml, and lungo’s 120ml), and a spent coffee pod bay capable of storing up to 12 used capsules.

Just like the last model, everything in the Nespresso UMilk is automatic, and just like in that same prior model, the drip tray and cup support rely on magnets to connect to the main machine.

In Australia, there are two companies manufacturing the UMilk, with the white model produced by Breville, and the black produced by DeLonghi.

While the review model was a DeLonghi Nespresso UMilk, the experience should be the same across both.

Coffee addicts keen to get their caffeine fix before they leave the house often have to scramble with machines that require tamping, group heads, and grinding coffee beans into fine dust, but that’s not for everyone.

Indeed, some of us just want everything to be automated, and with a simple drop of a pod, we can have coffee with excellent crema, just like that.

Nespresso’s UMilk has been released with that in mind, continuing the excellent tradition of factory-engineered coffee capsules for an identical coffee drinking experience across the board.

Nespresso has been doing this longer than most, and as such now has a range of espresso pods designed to produce the same cup of coffee every time the machine is used.

Little about the UMilk has changed from a design point of view since we saw the Nespresso U last year: it’s a shorter plastic version of Nespresso’s CitiZ model, designed to look modern and yet still blend in with a clean environment.

Matte black plastic sits under the main shell colour, and while this machine looks nice, it’s also unlikely to draw attention to itself thanks to the lack of silver and chrome parts Nespresso models usually come with.

There is no power button on the UMilk, though, with merely three touch buttons for the amount and strength of coffee, and the capsule door being the controllers for this machine.

What you will find is two containers sitting on a rotational section at the back of the unit.

The first of these is the 800ml water reservoir, which sits on the left most bay on the unit. This is a must-be-filled part of the UMilk, because without water, you can’t have coffee.

The second part of the UMilk that now has a bay of its own is the Aeroccino, a part which previously had to be plugged in separately.

With this part now connected to the UMilk, there is now one less plug and another bay at the back, which sits at the right and can be rotated to change position.

The Aeroccino canister features a button on the side which can be pushed once for hot frothed milk and twice for cold frothed milk, or just ignored if you don’t want any milk with your coffee.

Use of the UMilk, though, is the same as it ever was: simply open the pod capsule door, select the length of coffee you want, place your cup below the spout, and then drop the capsule in, closing the door once you do so.

That last action of closing the door is the very thing that starts the extraction process, so make sure there’s a cup underneath otherwise you’ll have coffee sent everywhere but your cup.

Once the extraction has taken place, the machine will automatically released the used capsule to its spent container underneath, which will need to be emptied by you when it starts to fill up, holding at most around ten pods.

All up, the UMilk is as effortless as the previous generation, producing a consistent and simple cup that anyone can use. After the cup is made, you can opt to throw milk in the Aeroccino and make yourself a cappuccino easily, or just skip it and drink the espresso straight.

So is there anything wrong with the Nespresso UMilk?

As far as we can tell, not really. In essence, this is the perfected version of the Nespresso U, and is exactly the update that product needed.

While the instructions for using this machine are slightly reversed from other machines, like the U, it’s very easy to adapt to, and anyone who craves a quick and easy coffee fix will be delighted here, with the $300 cost not being too prohibitive at all.

Last year’s $299 U managed to do what Nespresso had never managed previously: produce a relatively inexpensive encapsulated coffee machine for people who didn’t want to spend more than $500 on the technology.

While the original U came with the Aeroccino milk frother, this year’s model has gone one step further and integrated a bay for it on the back, making it better than ever, and requiring only one cord compared to two.

It might seem like a simple change, but it’s exactly the update the U needed, making this the perfect entry to anyone itching to try out Nespresso’s coffee capsule system.

Overall
Features
Value for money
Ease of Use
Design
Reader Rating0 Votes
Same excellent automatic machine as the Nespresso U; One plug for both milk frother and coffee machine; Excellent value;
Like the U, it works in reverse, so owners of older machines will need to get used to it;
4.9