Netflix is throttling back Australia in the time of Coronavirus 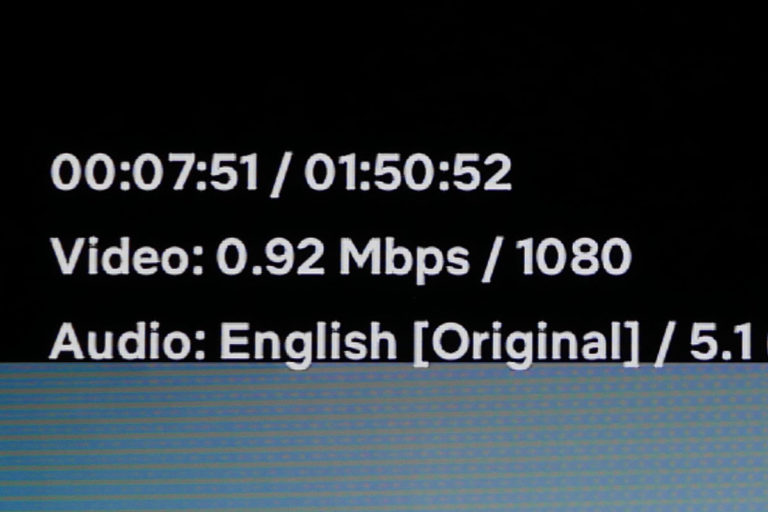 After a modestly late night of work last night, it was time for a bit of Netflix. Running through the options, I found that I’d only watched the movie Hanna halfway through. Good, time to watch the rest. But after five minutes or so, the mediocre picture quality penetrated my consciousness. Hmm, weird. What was going on?

I tapped the “Info” key on the IR remote for my LG OLED TV (I paid ten bucks for the remote at Bing Lee, because the standard Magic Remote lacks that very key). It revealed that Hannah was streaming at 1080p … but at a shockingly low 0.92Mbps. (See the graphic at the top of the page.)

You don’t have to believe me that 0.92Mbps is shocking. Back before I had NBN, full HD content from Netflix typically streamed at slightly better than 3Mbps. Since I’ve connected to NBN, it has streamed at, incredibly, 15.25Mbps. Which is the same bitrate used by UltraHD/4K content. (By way of comparison, full HD Blu-ray discs typically run at more than 20Mbps, with some going to more than 30Mbps.)

Hmmphh. When I’d switched on the TV just before viewing, it had announced that it had downloaded a new firmware upgrade. It would install if I switched off the TV and switched it on again. Slave that I am to my gadgets, I had done just that. After a few minutes the TV was right to go. Perhaps that had somehow wrecked the streaming speed of Netflix.

If we’ve learned anything from “The IT Crowd”, when your computer isn’t working properly – and these days, much of a TV is a computer – you switch it off and switch it back on. But that made no difference. Still 0.92Mbps. Still a slightly soft picture and, worse, substantial posterization on certain scenes. That’s a paint-by-the-numbers-picture banding of colours. It had been a couple of months since I’d watched the first bit of Hanna, but I was confident there’d been no such picture issues then.

Perhaps my Internet connect was stressed? Speedtest said no: 47.85Mbps download speed. Well, what if I tried steaming something in UltraHD. I was also partway into the very interesting Turkish fantasy/mystery “The Gift”, which was indeed UltraHD. It had streamed from Netflix at 15.25Mbps when last I checked. (Netflix seems to top out at 15.25Mbps.) No, it wasn’t limited to less than 1Mbps. But last night it was running at 7.62Mbps, or half the speed compared to what it was not so long ago. Happily, the picture quality difference wasn’t quite so obvious.

It was at that point that the word Coronavirus popped into my mind. Could it be that Netflix, in anticipation of or reaction to increased usage, due to people stuck at home with nothing else to do, had throttled back streaming speeds? You know, overburdened servers and all that?

So I went googling. A week or so ago Techdirt reported that “Netflix, Disney, YouTube, and Instagram have all announced they’re temporarily throttling their video streams in Europe to help mitigate the bandwidth strain created by COVID-19, as millions hunker down to slow the spread of the pandemic.”

It added that, “In a blog post, Netflix stated the company was throttling back the streaming quality of its titles by around 25% for 30 days after European regulators asked the company to do so to handle the pandemic-driven bandwidth surge.”

Techdirt noted that, “According to the company, the impact on visual quality should be minor (for everybody but videophiles, anyway).” Seems that I’m somewhat of a videophile.

Further googling revealed that the Australian government had asked “Streaming and Gaming Platforms To Limit Bitrate”. That Gizmodo report accuses Australians dissenting from this of being “apathetic”. But, well, I’d just note: 47.85Mbps last night. 47.88Mbps this rainy Thursday afternoon. If there’s a bandwidth usage surge, it doesn’t seem to be having too much of an impact.

Anyway, expect this to be the case for the next few months. I suppose that if the coronavirus lockdown looks like it will linger for several months, especially if network bandwidth seems to be holding up, Netflix may reconsider. It could, for example, throttle full HD content to, say, 2Mbps rather than less than 1Mbps. That would be much less damaging to picture quality while still saving some bytes. Or perhaps it could even have bandwidth change dynamically according to need.

And, of course, this is likely not just Netflix, but Stan, YouTube and other purveyors of streaming video content.

UPDATE (a couple of hour later):

I asked Netflix for any remarks it may care to share about this. From Ken Florance, VP Content Delivery for Netflix:

Given the crisis, we’ve developed a way to reduce Netflix’s traffic on telecommunications networks by 25% while also maintaining the quality of our service. So, consumers should continue to get the quality that comes with their plan – whether it’s Ultra-High, High or Standard Definition. We believe that this will provide significant relief to congested networks and will be deploying it in Australia for the next 30 days.

Apparently this started last week. That 25% is interesting. My figures show a 50% reduction for UltraHD material, and more than a two thirds reduction for 1080p content. Presumably those massive cuts in streaming rates at the individual level are required to offset (and more), the increase in usage. I would quibble with the word “quality”. The resolution may be the same, but with full HD at least, there’s significant over compression and seeming loss of bit depth. Oh well.

You can read what Netflix had to say about the European version of this action here.