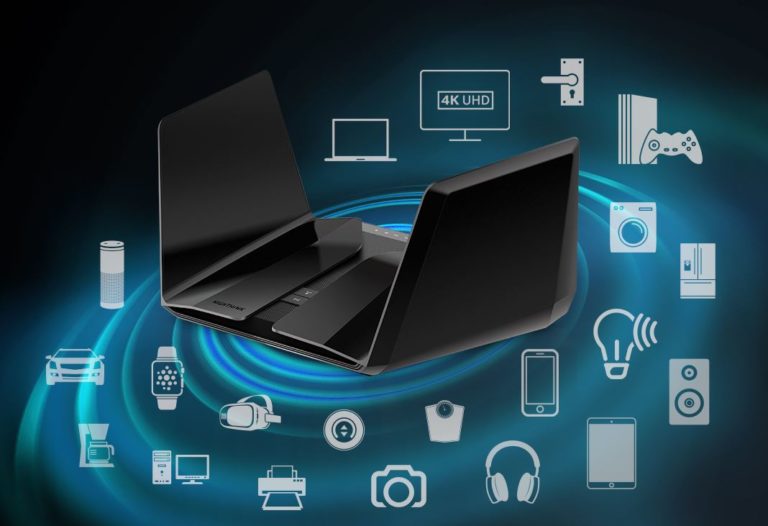 The new NETGEAR AX12 (Wi-Fi 6) router is a beast. It is fast, damned fast, and it has the bandwidth to burn – network capacity. It is going to change home networks and IoT reliability.

NETGEAR are serious about AX routers being among the first to market. The NETGEAR AX12 is its best yet.

I just started testing the NETGEAR AX12 about 48 hours ago, and the results are impressive.

On the 5GHz stream with a Samsung Galaxy Note10+, it achieved 1200Mbps at 5 metres from the router. At 10 metres its 1020Mbps and 20 metres it is 102Mbps (this is through three walls and cupboards). No other router comes close.

On the 2.4Ghz stream (we reserve this for IoT devices) it achieves a rock-solid 229Mbps at up to 60 metres (also through walls etc.).

As we said in that review, we need to become more familiar with other AX routers and figure out what effect the new jargon like OFDMA, 1024-QAM, Medium Access Control, 2×2/4×4/8×8 streams, QoS etc., has on performance.

This is the V8 equivalent of routers, and it will even handle 8K video streaming (there is a V12 coming – see later).

Our tests were all conducted while supporting about 30 IoT smart Wi-Fi devices, Arlo 4K Ultra security camera streaming, 4K video streaming (over ethernet) and 1080p streaming (over Wi-Fi 5Ghz). And it did not raise a sweat!

Looks-wise the NETGEAR AX12 is the Flying Nun in Darth Vader drag. It is also larger than the AX8.

It has a 1Gbps WAN port and four 1Gbps LAN ports (combine two for 2Gbps). There is a Multi-Gig 5Gbps Lan port which could handy for external multi-Gig NAS devices or in commercial applications to share bandwidth.

It defaults to dual-band – two separate SSIDs (a must for connecting IoT devices). It can aggregate speeds via Smart Connect (not tested yet with IoT).

This is currently the fastest AX router with the most concurrent streams so it means it can support more devices at higher speeds. But we say currently – NETGEAR (and other brands) will release a tri-band version capable of 10.2Gbps soon.

The Android (and we presume iOS) app has a basic and an advanced mode. It is straightforward to set up and takes care of forcing password changes etc.

While this is called an AX router the firmware to enable AX OFDMA is not available in Australia yet. Instead, it uses VHT (very high throughput) to obtain speeds above 866Mbps on VHT enabled devices. That is something to do with the Wi-Fi 6 standard not yet ratified.

Leading the New Era of Wi-Fi 6

NETGEAR are 100% correct that Wi-Fi 6 is the quantum leap we need to make Wi-Fi fast and reliable – until Wi-Fi 7 comes along (in a few years). It is fully backward compatible, and it provides the added bandwidth we need for smart devices.

But the future of Wi-Fi is more than raw bandwidth. It is getting enough bandwidth where you need it – be that the front or back yard for a Wi-Fi camera or speaker, the garage for the smart connected car, the person cave for streaming – whatever.

This is a perfect engine to connect to the internet and distribute it to all devices. But we still have issues with the tyranny of distance. The maximum 2.4Ghz range is 100m line-of-sight and 50 metres inside. 5GHz achieves less than 1/3rd of that range, and that is in perfect conditions.

We really need to address the issues of things like a single SSID and AX speeds at distances well outside the theoretical range.

I am keen to see what NETGEAR can do with the AX routers and suitable AX extenders.

Mesh routers are OK in some circumstances. NETGEAR will release an Orbi RBR852 AX6000 tri-band mesh which comprises

The problem is that each satellite needs to within say, 10 metres (maximum – even closer is better) of the router to share that 2,400Mbps to retransmit.

I note that the Orbi satellites don’t have a hardwired Ethernet backhaul port and shared bandwidth is the bottleneck.

While the artist’s impression below looks good in practice the biggest issue with Wi-Fi is network design and most of the time the NBN socket is not in the most favourable place to distribute signals evenly over a home.

Wi-Fi 6 is here, and it is sufficiently faster and better – enough to justify throwing every old router out.

NAS to supercharge your home-sharing, storage and backup